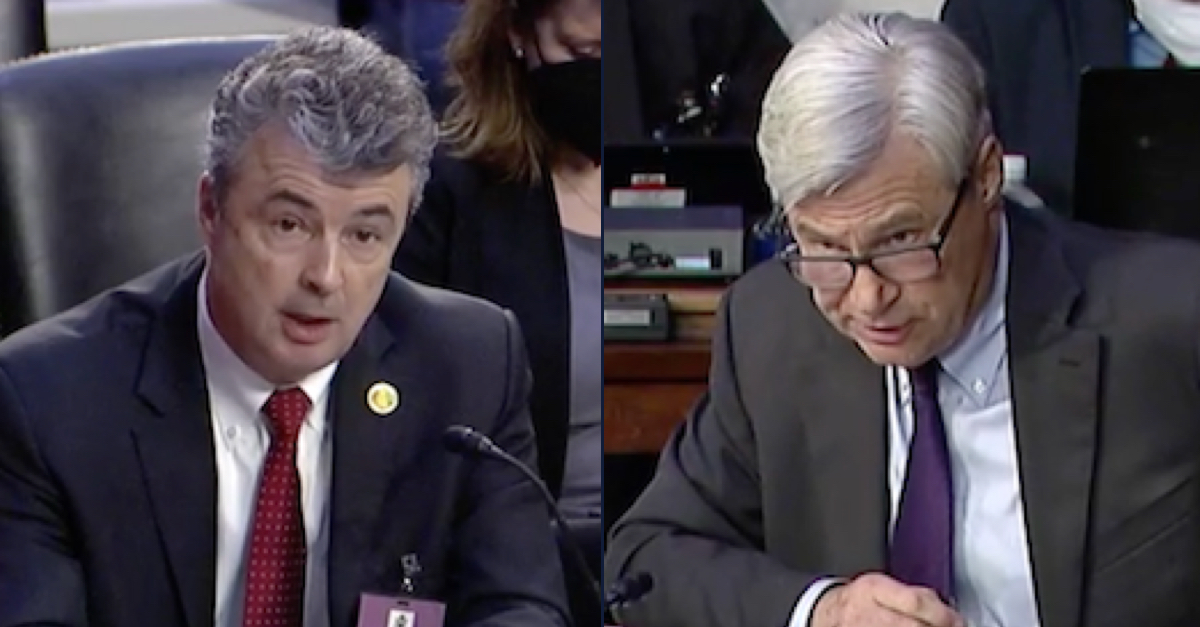 A Republican attorney general whose political group made robocalls encouraging Donald Trump supporters to march to the Capitol on Jan. 6 in protest of the results of the 2020 presidential election refused to acknowledge Joe Biden as the “duly elected” president.

Alabama Attorney General Steve Marshall, a Republican, had appeared before the Senate Judiciary Committee on Thursday to offer testimony against Ketanji Brown Jackson’s nomination to the Supreme Court.

MINUTES AGO: Alabama’s Attorney General is questioned at Senate Judiciary Committee… and this exchange happened ====> pic.twitter.com/3UCoe0Z3vz

In his remarks before the committee, Marshall said he was testifying as “a representative of the community of experienced and dedicated prosecutors who are gravely concerned about the direction our country is heading in when it comes to public safety and law and order.” Marshall pointed to support for Jackson by groups calling to “defund the police,” and alleged that Jackson, poised to become the first Black woman on the Supreme Court, would be “inclined to use her position on the Court” to reform the criminal justice system.

As per procedure, committee members had the opportunity to question the witnesses after making their prepared remarks, and Sen. Sheldon Whitehouse (D-R.I.) used that time to hone in on Marshall’s possible role in what eventually became an attack on the Capitol on Jan. 6, when Trump supporters violently overran police and swarmed the building, temporarily stopping Congress from certifying Biden’s win in the 2020 presidential election.

At the time, Marshall was the chairman of the Republican Attorneys General Association (RAGA). The policy arm of RAGA, the Rule of Law Defense Fund (RLDF), had put out a robocall encouraging people to “march to the Capitol building and call on Congress to stop the steal,” a reference to the false claims by Trump and his supporters that the 2020 presidential election was tainted by voter fraud.

Although Marshall had initially refused to say whether he was in Washington on Jan. 6, he said Thursday that he was not personally present in the nation’s capital that day.

When Whitehouse asked if RAGA or RLDF had staff present on Jan. 6, Marshall said he “can’t speak to that,” and reiterated that the group has “denounced lawlessness” both at the Capitol on Jan. 6 and nationwide, and tried to redirect focus to questions about Jackson.

“Did you personally know of or approve the text of the robocall that went out from RLDF?” Whitehouse asked.

“Do you know how that robocall was funded?” Whitehouse continued. “Was that out of the general revenues of RLDF, or was a specific solicitation made to fund it?”

“Did you personally solicit funding for that robocall?” Whitehouse inquired.

“Senator, I have made multiple comments here already,” Marshall said, dodging Whitehouse’s question. “The question before this body is the nomination of–”

“I get to ask the questions,” Whitehouse reminded Marshall, trying to cut him off, although Marshall could be heard saying that the group has denounced the violence at the Capitol while Whitehouse said he was trying to determine the source of funding behind the robocall.

“Pretty simple question, yes or no, did you personally solicit money to support the robocall that brought people to the Capitol and then assaulted the Capitol?” Whitehouse pressed.

Whitehouse then asked Marshall if he had “any contact with members of Congress in any effort to keep the electoral process open through objections to give those coming to assault the Capitol time to breach the Capitol and disrupt the elections process?”

Marshall again answered in the negative: “No.”

When Whitehouse asked Marshall if he had anything to say to police officers who defended the Capitol that day, reminding Marshall that in testifying before the committee, he “enjoy[s] the protection of Capitol police officers.”

“Senator, I object to the premise of your question that somehow the organization I was connected with had anything to do with the violence that took place,” Marshall said, repeating that the group has already denounced the violence.

Whitehouse then asked Marshall what appeared to be a straightforward, simple question: “Is Joseph R. Biden of Delaware the duly elected and lawfully serving president of the United States of America?”

“He is the president of this country,” Marshall said.

“Is he the duly elected and lawfully serving president of the United States?” Whitehouse repeated.

“He is the president of our country,” Marshall said again.

“Are you answering that, omitting the language ‘duly elected and lawfully serving’ purposefully?” Whitehouse asked.

“I’m answering the question: he is the president of the United States,” Marshall responded.

“You have no view as to whether he was duly elected or is lawfully serving?” Whitehouse asked.

“I’m telling you he is the president of the United States,” Marshall said again.

Whitehouse then said he had no more questions, and the hearing resumed without Marshall acknowledging the validity of the 2020 vote.