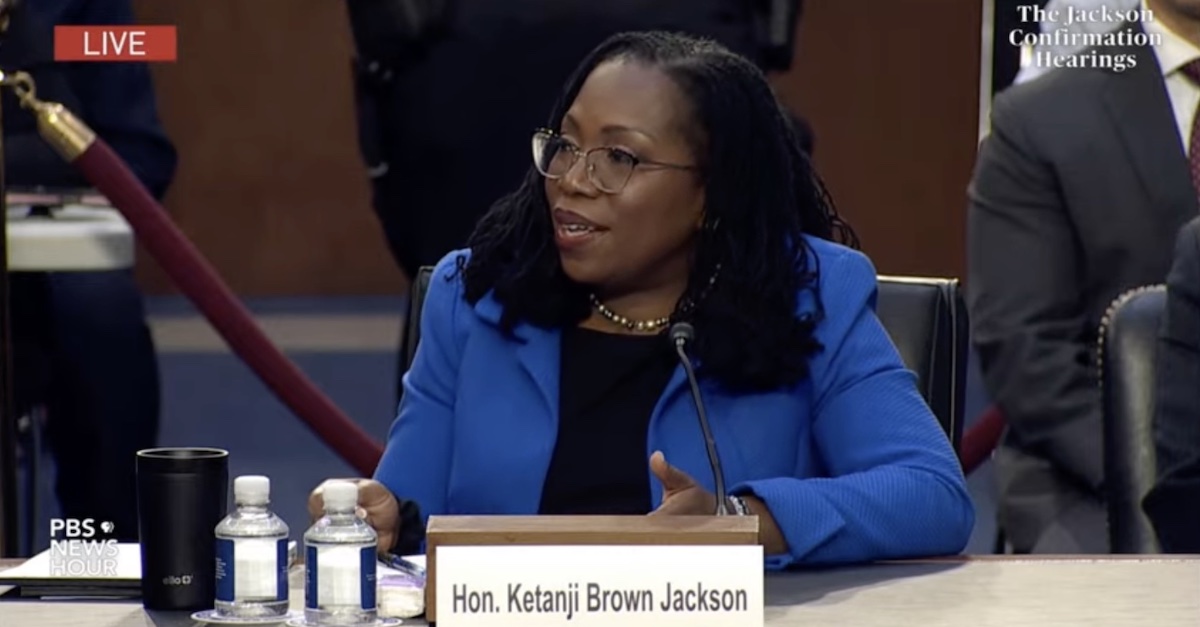 Appearing to respond directly to GOP characterizations of her as a radical, Supreme Court nominee Ketanji Brown Jackson expressed strong support for the role of law enforcement during her confirmation hearings Wednesday. She reflected upon her family members’ experiences as police officers as an ongoing reminder of the importance of her work as a judge.

Over the past three days, Republican members of the Senate Judiciary Committee have taken turns painting Judge Jackson as a jurist who would upend the Supreme Court.

Sen. Lindsey Graham (R-S.C.), who voted for Jackson’s ascension to the D.C. Circuit last year, set the tone for such vituperative attacks in claiming that the “most radical elements of the Democratic party with the most radical views of how to be a judge—and you are their choice.” Senate Republicans, even ones who previously supported her, have used her career as a public defender to depict her as lenient on criminals.

“I Understand the Need for Law Enforcement”

Judge Jackson’s recitation of her family history stood as an implicit rebuke to those attacks on her third day of testimony on Wednesday, in remarks that highlight how she won the support of the Fraternal Order of Police and the International Association of Chiefs of Police. The Senate Judiciary Committee, now under Democratic control, rattled off her endorsements from at least 60 top law enforcement officials, almost 60 former Department of Justice officials, and nearly 90 former state attorneys general.

When asked by Sen. Jon Ossoff (D-Ga.) to talk about her brother, Ketajh Brown, and his service in the Army and as a police officer in Baltimore, Jackson said that he followed her family’s “long tradition” of public service. That tradition, Jackson said, was a “core family value,” and mentioned family members who worked as lawyers, educators, and police officers.

After graduating from Howard University, Ketajh Brown chose to be a police officer in Baltimore, which Jackson noted is a city that “struggles, like many cities, with areas that have a lot of crime.”

“It was a very stressful period for us as a family because as proud as we are of his service and as much as we know it’s important, law enforcement is a dangerous profession,” Jackson said. “As family members you worry when you don’t get the phone call, and haven’t heard for a couple of days, when you hear about things in the news and in the community, you worry.”

Jackson, who recalled that her uncles, both police officers, would place their service weapons on high shelves during family gatherings in order to keep them away from children, said that she valued the service and sacrifices of law enforcement.

“We Were Upholding Our Constitutional Values”

However, Jackson said that accountability for criminal behavior includes protecting the rights of accused criminals, a balance she said is required under the law.

“I also, as a lawyer and a citizen, believe very strongly in our Constitution and the rights that make us free and what that means to me is an understanding that although we need accountability, although there is crime, we also have a society that ensures people that have been accused of criminal behavior are treated fairly,” Jackson said. “That is what our Constitution requires. That is what makes our system so exceptional.”

Jackson also recalled her brother’s decision to join the military after 9/11, and his choice to join the front lines.

Jackson described the way she related her brother’s service to her own approach to practicing law, and referred to her time as a federal public defender, during which she represented detainees at Guantanamo Bay. If confirmed, Jackson would be the first Black female Supreme Court justice as well as the first former public defender to sit on the high court.

“For me, what that meant was an understanding that to defend our country and its values, we also needed to make sure that when we responded as a country to the terrible attacks on 9/11, we were upholding our constitutional values, that we weren’t allowing the terrorists to win by changing who we are,” Jackson said. “So I joined with many lawyers during that time who were helping the courts figure out the limits of executive authority consistent with what the framers have told us is important, the limitations on government. I worked to protect our country, my brother worked on the front lines and it was all because public service is important to us.”