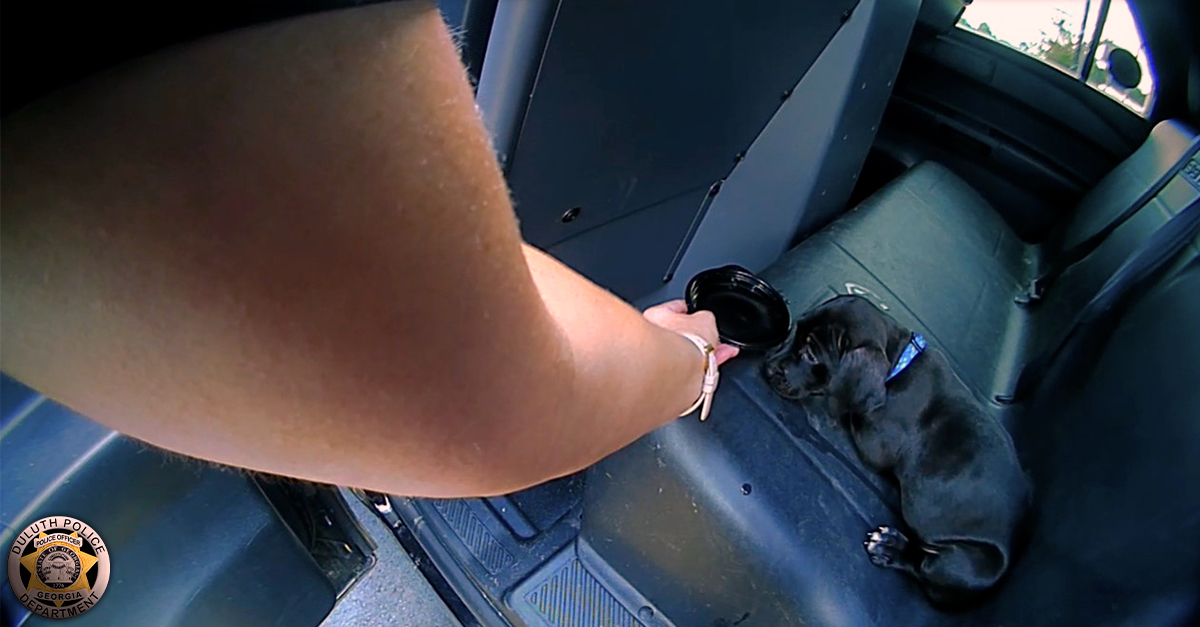 Officer Howell of the Duluth, Ga. Police Department offers water to a puppy that had been locked in a hot car.

A police officer in Georgia this week stepped in to save a young puppy that was left in a locked car on one of the hottest days of the month, local news outlets reported this week.

According to the reports, Officer Howell of the Duluth Police Department was in the vicinity of a Walmart on Pleasant Hill Road on Monday when he was flagged down by an employee seeking his assistance. The employee told Howell that they saw a puppy locked in the back seat of a car parked in the store’s lot that appeared to be in trouble. The car’s windows were rolled up.

The officer approached the vehicle where he “could see and hear the dog in distress from the extreme heat,” the department said in a news release. According to weather records, the temperature in Duluth on Monday reached a high of 90 degrees.

Acting quickly, Officer Howell used a special tool to unlock the car door and rescue the puppy from the extreme heat.

Sergeant Jill Manders then took control of the situation and gave the puppy water, “as it was obviously in distress,” the department said.

The owner of the puppy, who had been shopping inside the store, initially told officers that she had only left the animal in her vehicle for a short period of time. But according to a report from Atlanta CBS affiliate WGCL-TV, the Walmart employee who had first spotted the puppy was also able to provide timestamps for when the owner parked her car and when she exited the store. Investigators determined that she had left the dog unattended in the car for “nearly an hour”

“With the car off and being there for nearly an hour the inside temperature was over 119 degrees,” the Department said in a post on Facebook.

Authorities did not release the name of the animal’s owner, but the department said that she was charged by Gwinnett Animal Control officers.

The Duluth Police Department did not immediately respond to an email from Law&Crime inquiring about additional details from the incident.