After ‘Needless Suffering,’ Thousands of Beagles Headed for Humane Society as Part of DOJ Agreement with Virginia Research Facility 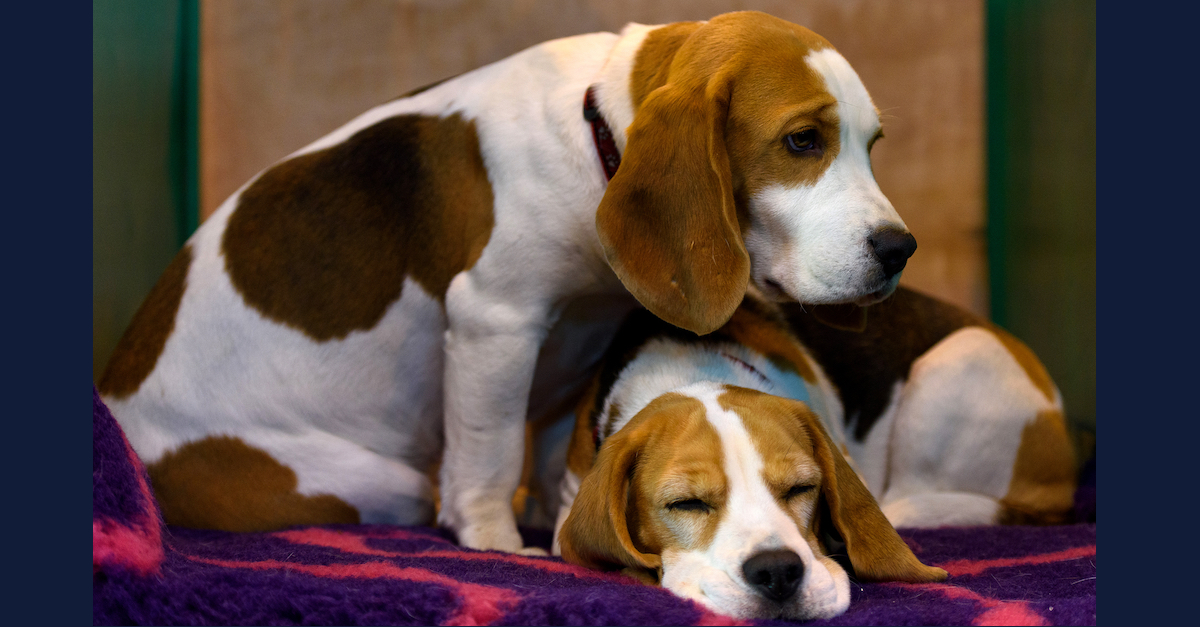 A pair of Beagles pictured resting on a bench during a dog show. They are not among the Beagles referenced in this story.

An animal-breeding facility in Virginia that sells animals for research will surrender 4,000 beagles under a consent decree with the Justice Department over its alleged failure to provide humane facilities and basic care for the dogs.

Envigo RMS, LLC has entered into the agreement after the DOJ sued the company in May over allegedly “failing to meet the minimum requirements for handling, housing, feeding, sanitation, watering, and adequate veterinary care.”

According to the complaint, Envigo had been “on notice” that it was in violation of the Animal Welfare Act (AWA) since at least July 2021.

The DOJ noted that the AWA “establishes minimum standards of care and treatment to be provided for certain animals bred and sold for use as pets, used in biomedical research, transported commercially, or exhibited to the public.”

Envigo, the DOJ said, failed to meet those minimum standards, despite receiving multiple citations since July 2021 for potentially violating the AWA.

“Rather than spend the money to meet the minimum standards set by the AWA and provide each beagle with the care that Envigo is legally obligated to provide, upon information and belief, Envigo has employed a paltry number of employees and elected to euthanize beagles or allowed beagles to die from malnutrition, treatable and preventable conditions, and injuries resulting from beagles being housed in overcrowded and unsanitary enclosures or enclosures that contain incompatible animals,” the complaint said. “When 300 beagle puppies died in 7 months due to ‘unknown causes,’ Envigo failed to investigate and accurately diagnose the cause of death to spare other beagle puppies from similar deaths … Pursuant to the policy that Envigo’s attending veterinarian established, Envigo staff were not even required to notify the attending veterinarian when beagle puppies were found dead.”

“Envigo’s disregard for the law and the welfare of the beagles in its care has resulted in the animals’ needless suffering and, in some cases, death,” the complaint added.

Envigo had acquired its license to breed and sell dogs under the Animal Welfare Act (AWA) in around June 2019. Among other regulations, the AWA imposes minimum requirements for the care of animals, including those that are “intended for use in research facilities.”

Under the decree, company is prohibited from engaging in any activity at its Cumberland facility that requires an AWA license. The AWA regulates the treatment of animals in research, teaching, testing, exhibition, transport, and by dealers.

Envigo has also agreed to surrender some 4,000 beagles to the Humane Society of the United States (HSUS). According to the DOJ, those dogs will be made available for adoption.

“Our Animal Rescue Team is preparing to remove and transfer approximately 4,000 beagles from a mass breeding facility,” the Humane Society said in a fundraising effort for the beagles on its website. “This is a massive undertaking, and we urgently need your support to help us transport, care for and find homes for these dogs as quickly as possible.”

The DOJ says that it is hoping to have all the dogs removed from Envigo’s facility and transferred to the Humane Society within 60 days.

“This settlement brings to an end the needless suffering caused by Envigo’s blatant violations of animal welfare laws at this facility,” said Assistant Attorney General Todd Kim of the Justice Department’s Environment and Natural Resources Division (ENRD) in the DOJ’s press release. “We will continue to vigorously enforce animal welfare laws to ensure that animals are provided the humane care that they are legally owed and deserve.”

“I am grateful to all those who assisted with this case, especially those who are ensuring that these animals receive the care they deserve,” U.S. Attorney Christopher R. Kavanaugh for the Western District of Virginia said in the statement.

“The settlement, which was mutually entered into by all parties involved and approved by the court on July 15, does not require that Envigo pay any fines or penalties to governmental agencies,” the press release said. “In addition, it is expressly stated that the settlement is not an admission of liability or wrongdoing by Envigo with regard to its past operation of the Cumberland Facility.”

In a June press release, Inotiv had announced that it was shutting down its Cumberland facility.

“The required investments to improve the facility and the lead time to achieve these improvements have recently increased,” president and CEO Robert Leasure, Jr. said in that press release. “As a result, we have decided we will not be investing further in this facility, and it will be closed.”

Read the consent agreement, below.