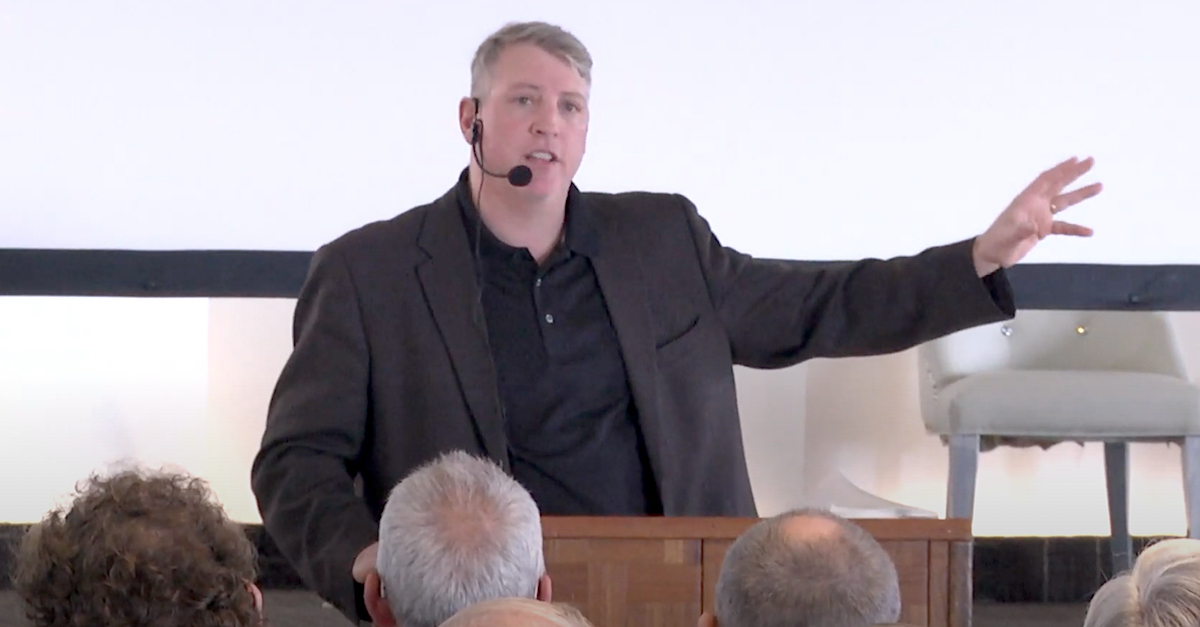 A Catholic pro-life activist has been indicted for allegedly assaulting a “reproductive health care clinic escort in Philadelphia,” the U.S. Department of Justice announced on Friday.

Mark Houck, 48, of Kintnersville, Pennsylvania, “is alleged to have twice assaulted a man because he was a volunteer reproductive health clinic escort,” the DOJ said in a press release.  “The two-count indictment charges Houck with a violation of the Freedom of Access to Clinic Entrances (FACE) Act, which makes it a federal crime to use force with the intent to injure, intimidate, and interfere with anyone because that person is a provider of reproductive health care.”

According to paperwork filed in U.S. District Court for the Eastern District of Pennsylvania, the charges are alleged violations of 18 U.S.C. § 248(a)(1), (b)(1), and (b)(2), a statute which guarantees access to clinic entrances.

The locus of the dispute, according to the grand jury indictment, was Planned Parenthood’s Elizabeth Blackwell Health Center, or “PPC,” on Locust Street in Philadelphia.  The organization is said in the indictment to provide “birth control, annual gynecological examinations, cervical cancer screenings, sexually transmitted disease testing, termination of pregnancies, and other reproductive health services.”

The gravamen of the action is as follows, according to the Sept. 20, 2022 indictment:

On October 13, 2021, [then-] 47-year-old MARK HOUCK was a protester at PPC and familiar with the PPC volunteer patient escorts, including B.L.

The first count alleges that Houck “intentionally injured, intimidated and interfered with B.L.” because the latter “was and had been providing reproductive health services.”

The second count alleges that Houck “verbally confronted B.L. and forcefully shoved B.L. to the ground in front of the PPC, causing injuries to B.L. that required medical attention.”

The nature of the medical attention was not explained in the available court records or in the DOJ press release.

U.S. Magistrate Judge Richard A. Lloret, who was elevated to that position during the Obama administration, signed the warrant for Houck’s arrest.  (Magistrates are selected by district court judges; they are not directly appointed by presidents.)

Magistrate Judge Lloret later signed an order of release which listed a $10,000 bail amount.  The order requires Houck to surrender his passport, restricts his travel to the Eastern District of Pennsylvania unless he receives permission to leave from Pretrial Services, and requires Houck to surrender any firearms he may possess.  The order also bans Houck from contacting any witnesses to the alleged crimes and bans him from “protesting and/or sidewalk counseling” at the facility where the events unfolded.  Other conditions include a promise not to commit any federal, state, or local crimes during the period of release.

Part of the case file was for a time impounded because of the ongoing investigation, the court records note, but that is common in the early stages of a grand jury probe.

Houck is listed as the co-founder and president of The King’s Men, a Catholic outreach group, according to the group’s website.  Houck is described as an “author, lecturer, radio host, activist and passionate Catholic” who “has been speaking to thousands of men about a variety of topics related to the development of authentic masculinity.”

According to a 2014 civil lawsuit in federal court, Houck also protested outside an “adult based business” called “Adult World.”  A judge’s order in that case outlines some of the events:

On August 3, 2011, on or about 4:00 p.m., Defendants appeared on and around the side of the real property of Adult World to protest. At this point, Plaintiff’s manager instructed Defendants that they were not welcome on the business property; however, Defendants refused to leave and continued their attempts to interfere with Plaintiff’s business. Plaintiff called the Montgomery Township Police, who in response forced the protestors to retreat to the mulched area in front of Plaintiff’s business, as there existed an easement. Defendants obeyed the police officer’s orders, and moved their protest to the mulched area on Upper State Road. Defendants passed out literature to passing motorists, allegedly causing a slowdown of traffic and abrupt stops by motorists to avoid collisions. Defendants also buried medals in the ground in what appeared to be a religious ceremony, all without permission from Plaintiff. Additionally, during the protest, a leader of TKM spoke with the news media, stating that illegal acts were being taken on the premises of Adult World.

On September 14, 2011, on or about 4:00 p.m., Defendants protested at Adult World again. Defendants used placards, which allegedly obstructed the safe ingress and egress of Plaintiff’s employees, customers and business invitees. Upon Plaintiff’s call to the Montgomery Township Police, Defendants were instructed to cease obstructing the paths of ingress and egress to Plaintiff’s property. After the police departed, Defendants proceeded to place their placards into traffic on Upper State Road, impeding the free flow of traffic, and causing vehicles to swerve to avoid collisions. Once again, Plaintiffs contacted the Montgomery Township Police, who instructed Defendants to halt their actions.

Both sides sued one another.  They eventually settled out of court.

A series of YouTube videos suggest that Houck is a regular speaker at Catholic events.

The website LifeSiteNews, which says its mission is to “provide an alternative” to what it describes as “highly slanted” news coverage of “pro-life” and “pro-family” activities and organizations, said Houck was “the latest victim” of Attorney General Merrick Garland’s Department of Justice.

Citing an interview with Houck’s wife, LifeSiteNews claimed a “SWAT team of 25 to 30 FBI agents swarmed” the Houck “property with around 15 vehicles at 7:05 a.m.” on Friday.

According to the site, which again cited Houck’s wife, the agents allegedly brandished “big, huge rifles” and took Houck into custody in a manner the wife described as a kidnapping “at gunpoint.”

The report said Houck’s wife complained that she didn’t immediately receive a copy of the arrest warrant and that the arrest terrified the couple’s seven children.

Houck’s wife reportedly told LifeSiteNews that she believed the incident surrounded a “pro-abortion protester” who ridiculed Houck and his 12-year-old son when the boy accompanied his father on trips to the clinic.  The wife, Ryan-Marie Houck, reportedly said the protester would utter “inappropriate and disgusting things” and had called her husband a “fag.”

The wife reportedly said the protester “kind of came into [the son’s] personal space” at one point, so “Mark shoved him away from his child, and the guy fell back.”

However, Ryan-Marie Houck asserted to LifeSiteNews that the person her husband shoved “didn’t have any injuries or anything.”

If the wife’s account references same individual named as a victim in the federal indictment, then the two accounts are in conflict as to whether or not an injury occurred.

According to LifeSiteNews, Houck’s wife said the person she was referencing “tried to sue” her husband but that the case was tossed out of court.  Law&Crime was not able to easily find a record of such a lawsuit in federal court in the Eastern District of Pennsylvania or in a Unified Judicial System of Pennsylvania online portal which contains state-level cases from around the commonwealth.  It is possible the action may have been filed in a local court whose docket does not appear on the statewide portal or that the matter was expunged.

According to the DOJ, the defendant Houck could face “up to a maximum of 11 years in prison, three years of supervised release, and fines of up to $350,000” if he is convicted of the alleged offenses.

“An indictment is merely an allegation, and the defendant is presumed innocent unless proven guilty,” the DOJ noted.

The court docket does not yet list an attorney for Houck.

A copy of the available criminal case file is below: