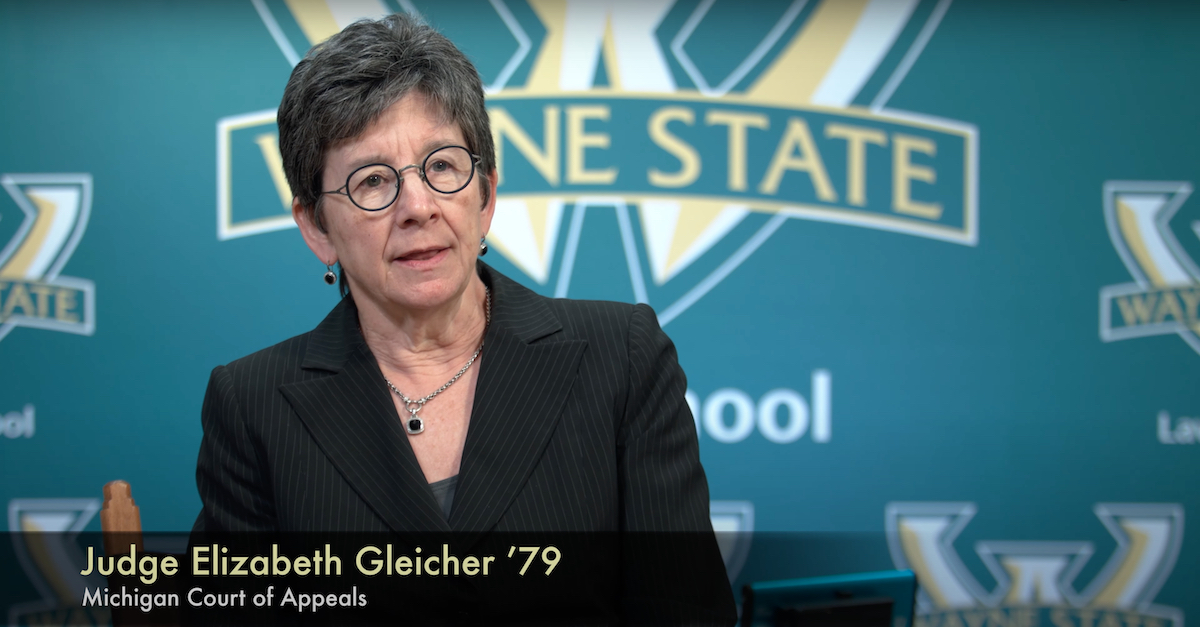 A Michigan judge has been accused of an ethical conflict after being assigned to hear a challenge to the state’s 1931 abortion ban.  The accusation is related to the judge’s annual donations to the plaintiff in the challenge, Planned Parenthood of Michigan, and to her previous legal work for the organization.

Elizabeth Gleicher currently serves as Chief Judge on Michigan’s Court of Claims, which has limited statewide jurisdiction over all civil actions filed against the state and its agencies. According to her bio on the court’s website, Gleicher was appointed to the Court of Claims in 2007 by then Gov. Jennifer Granholm (D-Mich.) after 27 years in private practice.

It’s some of that past legal work of Gleicher’s that has drawn criticism regarding her coming role in the lawsuit that Planned Parenthood of Michigan, along with its chief medical officer, filed to preemptively block enforcement of the state’s ban on abortions that was passed in 1931. That law made providing an abortion a felony, including prison time for doctors who perform the procedure, but it was rendered unenforceable when the 1973 Supreme Court case Roe v. Wade ruled that women held a “fundamental” right to have an abortion without being unduly burdened by government restrictions.

The lawsuit was filed in anticipation of the U.S. Supreme Court overturning Roe v. Wade or otherwise significantly limiting its protection for abortion rights, according to a statement on Planned Parenthood of Michigan’s website. In addition to seeking to block enforcement of the state’s 1931 abortion ban, the complaint also asks the court to determine that the right to an abortion is protected by the Michigan Constitution.

The nation’s highest court is currently comprised of six justices appointed by Republican presidents and three appointed by Democrats.  (Judge Kentanji Brown Jackson’s confirmation will not change the ideological makeup of the Court, as she is succeeding another Democratic nominee, Justice Stephen Breyer.) Among the cases awaiting an opinion is Dobbs v. Jackson Women’s Health Organization — a case regarding Mississippi’s ban on abortions after 15 weeks. Last October, the pro-abortion rights Guttmacher Institute had assessed that 26 states would be “certain or likely to ban abortion” if Roe were overturned. Texas, Florida, Arizona, and Kentucky have already passed restrictive abortion laws similar to the Mississippi law, and bills are moving forward in several other states.

Needless to say, this Michigan litigation is among many lawsuits that have been filed or are expected to be filed shortly in many states on this topic.

According to The Detroit News, Gleicher was assigned the Planned Parenthood case through the court’s standard practice of randomly assigning judges to cases on the docket. A letter distributed by the court clerk included a statement that upon receiving the case assignment, “Judge Gleicher asked me to notify all counsel of record that she makes yearly contributions to Planned Parenthood of Michigan . . . and she represented Planned Parenthood as a volunteer attorney for the ACLU in 1996-1997.”

“While Judge Gleicher does not believe this warrants her recusal,” the letter added, “and is certain that she can sit on this case with requisite impartiality and objectivity, she believes that this letter of disclosure is appropriate.”

Genevieve Marnon, legislative director for Right to Life of Michigan, told the News that it seemed “very difficult” for Gleicher “to remain impartial under those circumstances,” considering her frequent donations and past legal work for Planned Parenthood.

But there’s not much that the pro-life group can do about it. Rule 2.003 of the Michigan Court Rules only allows parties to the litigation to file a motion seeking the disqualification of a judge for multiple enumerated reasons including that the judge “is biased or prejudiced for or against a party or attorney,” has “personal knowledge of disputed evidentiary facts concerning the proceeding,” has previously been “consulted or employed as an attorney in the matter in controversy,” was involved in legal representation of a party within the previous two years, or if the judge or a family member of the judge has an economic interest in the proceeding or is otherwise involved in the case.

Right to Life of Michigan is not a strict party to the immediate case and therefore cannot file a motion to disqualify Gleicher for bias.

Planned Parenthood of Michigan already said it does not intend to challenge Gleicher’s assignment to their case.

“We take the chief judge at her word that she can fairly decide the legal questions presented in this case,” said spokeswoman Angela Vasquez-Giroux.

The only other party to the lawsuit is the office of Attorney General Dana Nessel (D-Mich.), as the official representative of the state that passed the statute being challenged. Nessel, in her first term and facing re-election this fall, has already expressed her opposition to defending the 1931 abortion ban statute, going so far as to say she would not initiate proceedings to establish a conflict wall in her office unless and until she got a court order forcing her to do so.

Right to Life of Michigan sharply criticized Nessel for these comments, accusing her of “violating her oath of office.” Michigan Republican Party co-chair Meshawn Maddock tweeted, “How can we expect a judge to be impartial when they’re donors to planned parenthood? As a donor she clearly ‘supports’ the plaintiff. She should recuse herself immediately.”

Gov. Gretchen Whitmer (D-Mich.) is not going to intervene. She filed a parallel case asserting similar arguments as the Planned Parenthood complaint to overturn the 1931 abortion ban. Her lawsuit was filed in a different court system, a county circuit court using her executive authority as governor to seek an immediate intervention by the Michigan Supreme Court, and therefore is not before Gleicher.

The Republicans have the majority in Michigan’s Legislature, and State Sen. Mike Shirkey, the GOP Majority Leader, issued a statement saying that the Senate “will explore all of our options if [Nessel] won’t fulfill her obligations.”

“The attorney general shouldn’t have run for office if she didn’t want to do the job,” Shirkey added.

The Detroit Free Press reported that Nessel said she would not seek to oppose another state entity from intervening in the case.

Thus, the Republican legislature is possibly the only remaining potential party which could assert an interest in defending a state statute and could therefore perhaps file a motion to intervene. Any such motion will need to be filed promptly if they the legislature wishes to seek Gleicher’s disqualification. The state’s court rules require a move “within 14 days of the discovery of the grounds for disqualification.”

The Michigan court rules further provide that Gleicher herself will rule on a motion for her disqualification. If she denies the motion, the party seeking her removal from the case would normally be able to seek review from the Chief Judge, but since Gleicher herself holds that position, the matter would be sent to the state court administrator to assign a different judge.

If Gleicher is somehow disqualified, the case would be assigned to another Court of Claims judge.

If the Michigan Legislature does intervene, they may find support for disqualifying Gleicher in the Michigan Judicial Code of Conduct, which does not expressly ban donations to organization like Planned Parenthood, but does say “[a] judge may participate in civic and charitable activities that do not reflect adversely upon the judge’s impartiality or interfere with the performance of judicial duties.” The conduct code also says a judge “should not allow activity as a member of an organization to cast doubt on the judge’s ability to perform the function of the office.”

Gleicher’s views on abortion have been on the record for some time.  In a video posted to YouTube in 2019, the judge said she “started out as a volunteer lawyer in the 1980s, and it happened to be a time when the Michigan Legislature started passing a number of laws intended to limit the ability of Michigan women to control their reproductive destiny.”

In the recording, which was part of a Wall of Fame induction ceremony for her alma mater Wayne State University, Gleicher said she helped represent the ACLU.

That recording is below: