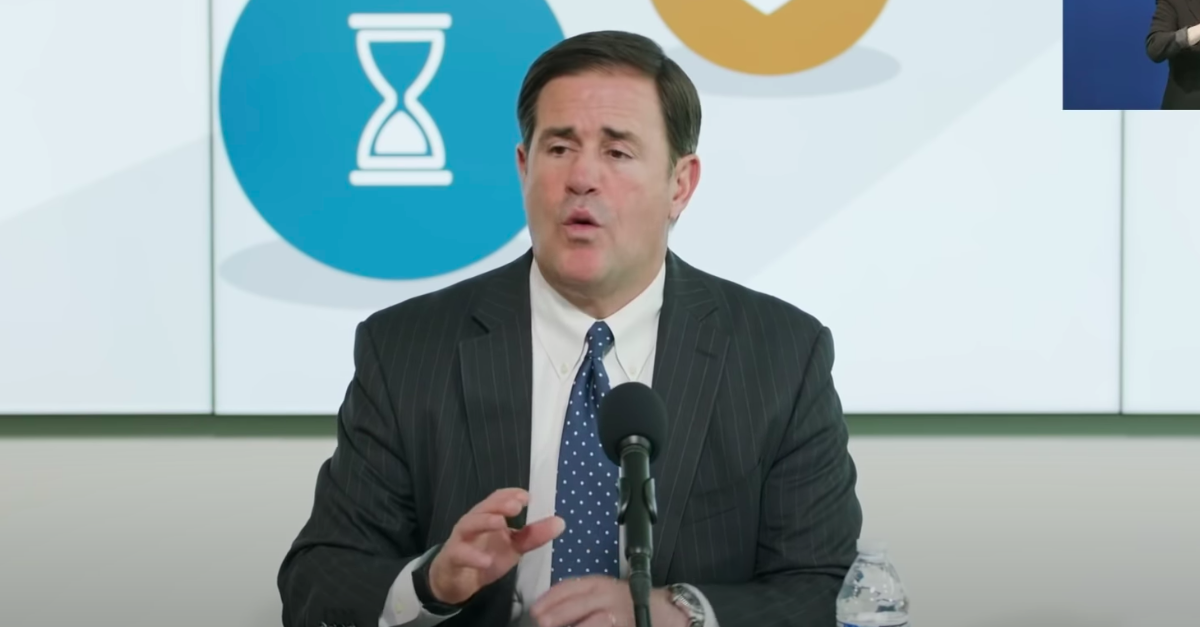 A coalition of abortion rights advocates and providers on Tuesday asked a federal judge in Arizona to block the state from enforcing a new law banning the procedure based on a diagnosis that a fetus has a genetic abnormality. The lawsuit argues that the measure is unconstitutional and runs contra to binding precedent concerning reproductive rights.

Signed into law by Republican Gov. Doug Ducey in April, S.B. 1457 makes it a class-three felony for a doctor to knowingly perform an abortion that is sought “because of a genetic abnormality” of the fetus. A felony can also be charged against anyone who “solicits or accepts monies” to finance such a procedure.

The measure allows the attorney general or the county attorney to seek an injunction to block abortions sought for genetic abnormalities and also creates a cause of action allowing the father of an unborn child to sue the mother for monetary damages, provided they’re married at the time she undergoes the procedure.

The complaint, filed on behalf of the plaintiffs by the American Civil Liberties Union (ACLU) and the Center for Reproductive Rights, argues that imposing criminal penalties and monetary liability on reproductive decisions violates the Due Process Clause and U.S. Supreme Court precedent established in Planned Parenthood v. Casey.

“This ban targets pregnant people who face complex and personal considerations as a result of fetal genetic screening or diagnostic testing during routine prenatal care, including decisions about what is best for them and their families, and then intrudes upon that private decision-making by wrenching away their right to choose pre-viability abortion,” the compliant states. “Any reading of this ban violates the Due Process Clause of the Fourteenth Amendment and decades of binding precedent confirming that ‘a State may not prohibit any woman from making the ultimate decision to terminate her pregnancy before viability.’”

The suit also takes aim at a provision that grants sweeping new legal rights “at every stage” of fetal development. This means that “all rights, privileges, and immunities available to other persons, citizens, and residents” of Arizona would be conferred to fertilized eggs at the moment of conception.

“The Act imposes drastic and unlawful measures that ban abortion for an entire group of Arizona patients, and also threatens maternal healthcare by creating new personhood rights for fertilized eggs, embryos, and fetuses. If S.B. 1457 is not enjoined it will wreak havoc on reproductive healthcare across Arizona, with devastating effects for pregnant patients and medical providers throughout the states,” the complaint states.

It further argues that the provision would drastically alter existing laws addressing issues such as assault and child abuse “in a manner that makes it impossible for Plaintiffs and their patients to identify whether a vast array of actions (including, but not limited to, maternal health care decisions and treatment for patients who are, or could be, pregnant) puts them at risk of criminal prosecution.”

“Because the Personhood Provision fails to provide adequate notice of prohibited conduct and invites arbitrary and discriminatory enforcement against Plaintiffs and their patients, it is unconstitutionally vague,” the complaint asserts.

Emily Nestler, the senior counsel at the Center of Reproductive Rights said politicians should not dictate what is an acceptable reason for seeking an abortion.

“Patients are the ones best suited to decide what is best for themselves and their families, in consultation with their health care providers. This law is an affront to our Constitutional rights and our ability to make private decisions free from government intrusion,” she said in a statement. “Yet, we are seeing these kinds of laws across the country. And this fall, the U.S. Supreme Court will hear a case that could overturn Roe v. Wade altogether. If that happens, Arizona and nearly half the states in the country are poised to ban abortion entirely. We will keep fighting to make sure this does not happen.”

Gov. Ducey championed the now-challenged law when he signed it earlier this year.  He said it would keep his state “among the top pro-life states in the nation.”

“There’s immeasurable value in every single life — regardless of genetic makeup,” Ducey said in a statement when he signed the bill into law. “We will continue to prioritize protecting life in our preborn children, and this legislation goes a long way in protecting real human lives. My sincere thanks to Senator Nancy Barto for her leadership and work on this life-saving issue.”

“We need to protect our most vulnerable, especially those with treatable genetic conditions,” Barto said. “They are loved, integral members of our community that make Arizona whole — and I’m proud to sponsor legislation that gives them a voice before they’re even born. Thank you, Governor Ducey, for signing Senate Bill 1457.”

According to a press release from the governor’s office, the law was designed to do the following:

Under SB 1457, a person performing an abortion must complete an affidavit stating that the person is not aborting the child because of an abnormality. It also requires the doctor performing the abortion inform the woman that is it unlawful to perform an abortion due to the child’s race, sex, or genetic abnormality.

Read the full lawsuit complaint below.