The Truth About Jerome Marcus's Story in The Federalist | Law & Crime 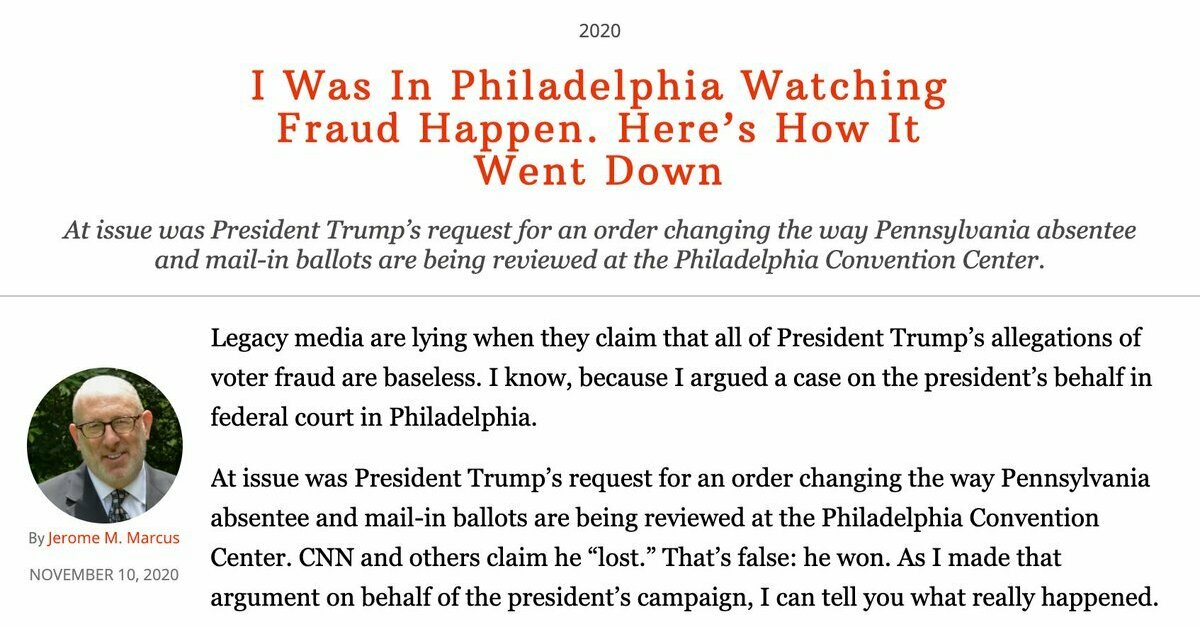 A Trump campaign lawyer authored an article asserting that he witnessed “fraud happen” during ballot-counting in Pennsylvania. That article, however, does not actually allege any form of fraud–or anything akin to fraud–whatsoever.

Writing Wednesday in the far-right publication The Federalist, Philadelphia attorney Jerome M. Marcus claims to have personally witnessed fraud occurring that was detrimental to the 45th president’s reelection chances against Joe Biden.

Titled, “I Was In Philadelphia Watching Fraud Happen. Here’s How It Went Down,” the piece itself doesn’t support the headline.

Marcus recently argued a case in federal court asserting that Trump’s campaign observers were prohibited from observing ballot-counting. That wasn’t actually true and the court confirmed as much by eventually dismissing the case as moot.

But that’s not all; Marcus himself confirmed that Trump’s observers were, in fact, allowed access to the ballot counting.

“There’s a non-zero number of people in the room,” Marcus said at one point when quizzed by the court about the campaign’s claims.

“I’m sorry, then what’s your problem?” George W. Bush-appointed U.S. District Judge Paul Diamond said in frustration after Trump’s team eventually conceded the overarching point of the lawsuit. The judge even got sarcastic:

Judge Diamond is… exasperated. He’s getting the parties to agree poll watching rules for everyone here and now in the hearing. They’re going to take a brief recess to do prepare to do that

Ultimately, the Trump campaign and the Biden campaign reached an agreement allowing for a fixed number of observers from each side to watch the count unfold at the Philadelphia Convention Center.

Marcus spends a few paragraphs rehashing the events that led up to that lawsuit, why he felt compelled to write it up in the first place, the campaign’s endorsement of those concerns and some of the legal niceties, finer points and minutiae regarding the disposition.

There’s just nothing there about fraud.

From the piece [emphasis in original]:

President Trump went to court about two problems: First, only a handful of Republican observers—substantially fewer than the Democrats had there—were being admitted to the room at the Philadelphia Convention Center where inspections were being conducted. Second, the few who could get in weren’t permitted to get close enough to see what was actually happening. The most important questions all have to ask are: Why all the hiding? What’s being hidden?

At the Convention Center counting location, I personally observed dozens of Trump campaign volunteers being barred from the counting room even though they’d been properly registered as observers. That’s why I urged Pam Bondi and Corey Lewandowski, who were on the scene, to authorize the filing of a request that a federal court order the Board of Elections to stop this nonsense.

In other words, Marcus claims to have witnessed an already-solved legal issue concerning ballot-counting observers. He alleges a GOP deficit of such observers and then goes on to further allege that the GOP’s observers couldn’t get close enough for their own liking.

Those allegations are followed by question-begging statements that suggest Democrats in Philadelphia are doing something nefarious behind-the-scenes. But what, exactly, that nefariousness might be is never quite specified.

The New Republic‘s legal affairs writer Matt Ford took note of the incongruity of Marcus’s claims vs. their characterization:

Innuendo? Sure. Actual evidence of fraud? Nope. I wonder if the hed was even the writer’s choice, since his piece is more focused on media claims about his lawsuit than anything else.

In the interest of thoroughness, Marcus does make one half-baked attempt to single out the alleged fraud but his proffered evidence again fails to support the extraordinary claim.

“Other people have gathered substantial evidence that there are indeed things to hide, including this video showing, among other things, footage of government officials wearing Joe Biden facemasks filling in blanks in already-submitted mail-in votes,” the attorney writes at one point–linking to a video by far-right network One America News (OAN) which doesn’t actually show any government officials doing any such thing. Rather, the video is simply shows OAN anchor Christina Bobb repeating those baseless claims. In terms Marcus might understand, all he’s provided is a series of ipse dixits. “The hearing I attended wasn’t about that, but it was about the conditions that make that possible.”

A fact-check by CBS News recently put the kibosh on many of Trump’s unsupported claims about poll watchers.

“Referring to the vote-counting going on in Pennsylvania, Mr. Trump is incorrect about the position of Philadelphia officials in a dispute over poll watchers at the Philadelphia Convention Center, where ballots are being tallied,” Melissa Quinn noted.

Fox News also corrected the record on the subject recently when asked about the false claim that GOP poll watchers were denied access to the Pennsylvania count.