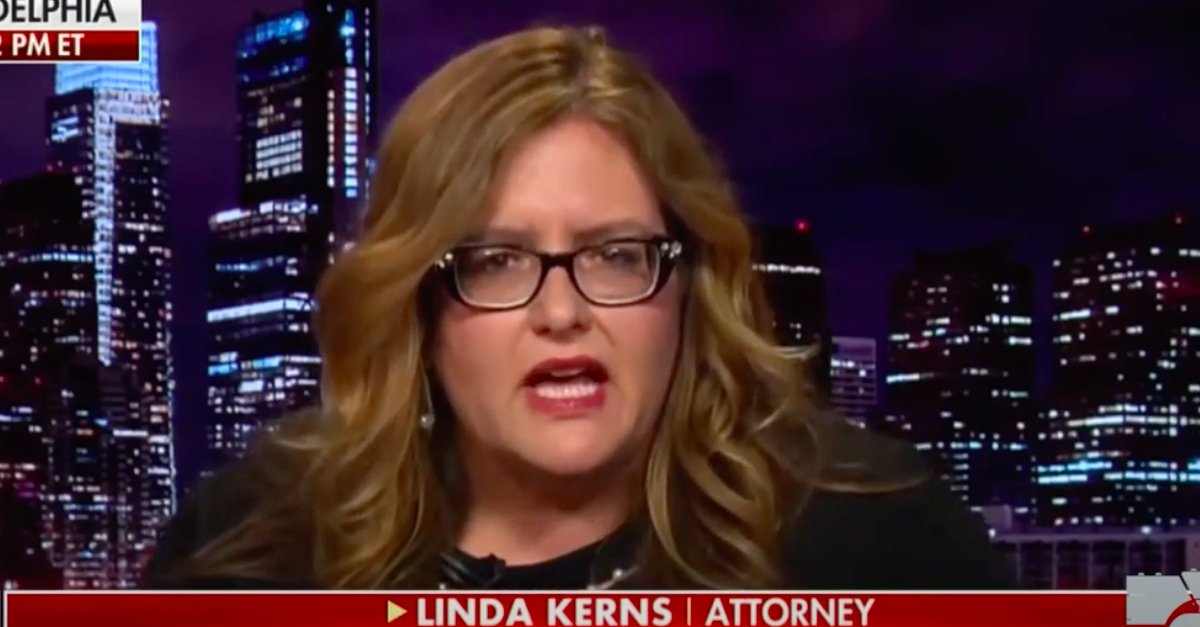 An attorney who withdrew from the Trump campaign’s federal case in Pennsylvania after saying she was harassed by an attorney at another firm is seeking an appeal of the Pennsylvania Commonwealth Court’s decision not to invalidate 69 mail-in ballots.

Linda Kerns filed the emergency petition for allowance of appeal at the Pennsylvania Supreme Court on Friday after the Commonwealth Court declined to invalidate the mail-in ballots in question. At most, the Trump campaign takes issue with around 2,000 mail-in ballots; Joe Biden won Pennsylvania by more that 81,000 votes.

But Kerns and the Trump campaign nonetheless want the Pennsylvania Supreme Court to review the lower court’s decision on an emergency basis:

Petitioner-Plaintiff, Donald J. Trump for President, Inc., (the “Campaign”), asks this Court to accept emergency review of the November 25, 2020 decision of the Commonwealth Court. On November 25, 2020, the Commonwealth Court affirmed the Order of the Court of Common Pleas of Bucks (Bucks County) that overruled the Campaign’s objections to specific absentee and/or mail-in ballots, denied the relief requested by the Campaign and dismissed the Campaign’s appeal from the Bucks County Board of Elections’ decision that the challenged ballots, with the exception of 69 ballots received with unsealed secrecy envelopes, were valid and could be counted, relying on the November 23, 2020 Supreme Court Opinion in a similar matter. Regarding the 69 ballots received in unsealed secrecy envelopes, the Commonwealth Court found that these ballots did not meet the requirements of the Pennsylvania Election Code but that its decision should be applied prospectively, such that the 69 ballots at issue would not be invalidated.

To hear the Trump campaign tell it, the Commonwealth Court “erred by affirming Bucks County Board of Elections’ decision to count the 1,995 absentee and mail-in ballots that failed to conform to the legislative mandates of Election Code Sections 1306(a) and 3150.16(a).”

Context: On Nov. 19, the Bucks County trial judge, Robert Baldi, denied the Trump campaign’s attempt to throw out some 2,000-plus ballots based on alleged deficiencies with said ballots.

On November 17, 2020, the Honorable Robert O. Baldi held oral argument on the Campaign’s appeal. Thereafter, the trial court entered an order dated November 19, 2020 affirming the Bucks County Board of Elections’ decision to count the 2,177 absentee and mail-in ballots. A stipulation was later entered as to 182 ballots so that the actual number of ballots at issue was reduced to 1,995.

Baldi said that to invalidate the challenged ballots would be to “disenfranchise” voters—an “injustice.”

Kerns said the “non-confirming” [sic] ballots, which number less than 2,000, should be voided.

“To hold otherwise violates the plain and ordinary meaning of the section’s mandatory language and creates serious equal protection concerns for voters throughout the Commonwealth who properly cast absentee and mail-in ballots in the November 3, 2020 General Election,” Kerns argued in a bid for a review of the case. “Accordingly, the Campaign respectfully requests that this Court consider these arguments, including the serious equal protection concerns and reverse the Commonwealth Court order and remand these appeals with instructions that the Campaign’s appeal to the Bucks County Board of Elections’ decisions be sustained and that the 1,995 non-confirming [sic] absentee and mail-in ballots not be counted as void.”

Commonwealth Court Judge Renée Cohn Jubelirer previously affirmed Judge Baldi’s order and noted that the Trump campaign made “absolutely no allegations of any fraud, impropriety, misconduct, or undue influence, that anyone voted who was not eligible to vote, or that the secrecy of the ballots cast was jeopardized.”

Judge Jubelirer also found, as Kerns put it, that “all but 69 of the ballot challenges at issue were resolved by the Supreme Court’s November 23, 2020 Opinion.”

Although the judge conceded that state law and the aforementioned state Supreme Court decision means that the “directive [to securely seal the ballot secrecy envelope] is mandatory such that an elector’s noncompliance results in a ballot that is not valid,” the court decided against a “strict interpretation” of the law for the current election because of the uncertainty that accompanied Pennsylvania’s first real foray into universal mail-in voting.

Kerns is still trying to get mail-in ballots voided.

Read the latest filing below:

[image via via Fox News screengrab]