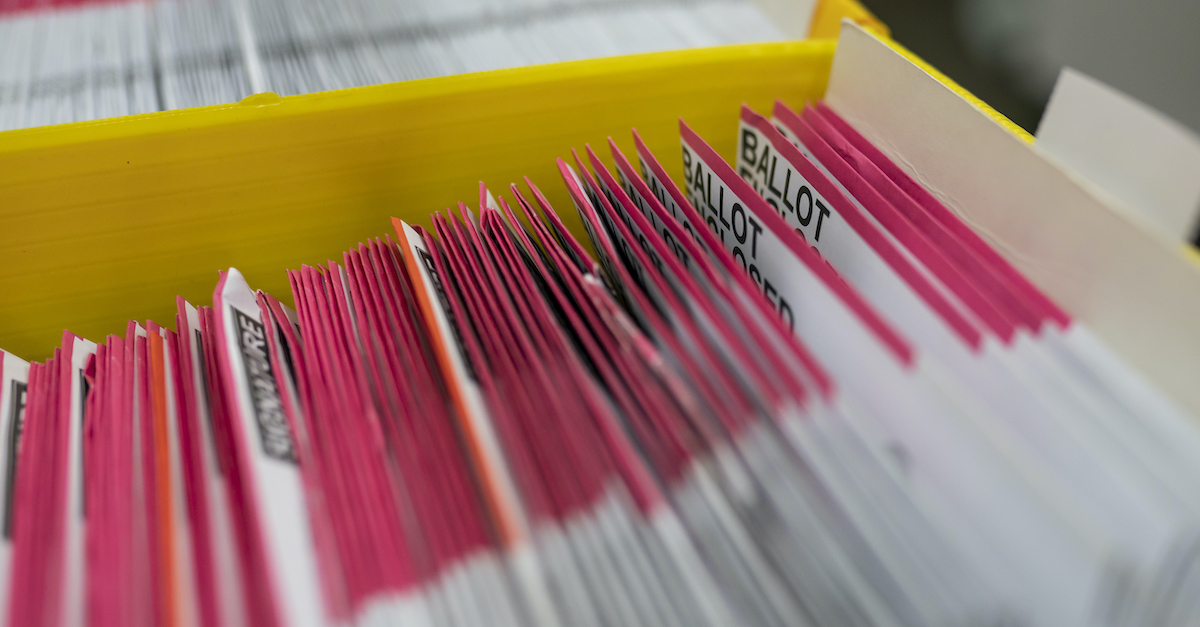 Hundreds of additional ballots were uncovered during a second sweep of U.S. Postal Services (USPS) facilities on Thursday.  That’s according to a progress report filed with the U.S. District Court for the District of Columbia on Saturday.  According to the report, nearly 600 ballots were found in five USPS districts throughout North Carolina and Pennsylvania.  Those districts are: Greensboro, Mid-Carolinas, Central Pennsylvania, Western Pennsylvania, and Philadelphia Metropolitan.

The filing also contains a “corrected report showing the total number of ballots identified on November 5, 2020 through daily sweeps of processing facilities in states with extended ballot deadlines.”

According to that afternoon order, the sweeps were supposed to occur “between 12:30 PM EST and 3:00 PM EST to ensure that no ballots have been held up and that any identified ballots are immediately sent out for delivery.”

Sullivan issued his emergency order after the mail delivery agency admitted that some 300,000 ballots had not been properly traced — they came into the system with an entrance scan but were lacking an exit scan by the time they should have been delivered to local elections officials. The judge’s order was meant to collect any straggling ballots and get them out of USPS custody by the close of business on Election Day.

But, perhaps unsurprisingly, the agency did not comply.

Citing the “the limitations caused by time and the Postal Service’s pre-existing Postal Inspection processes,” the agency said its efforts would remain “ongoing” until the various facilities could process the judge’s request.

“Inspectors will be in the identified Postal facilities throughout the evening,” the USPS wrote in a response to the court’s order. “Defendants are working as expeditiously as possible to comply with this Court’s orders while recognizing physical and operational limitations and the need to avoid disrupting key activities on Election Day.”

Almost immediately after the USPS admitted their inability to comply with the court’s order, Judge Sullivan issued a second order calling the defendants out for their “apparent lack of compliance.”

During a Wednesday morning hearing on the matter, the court reportedly “thrashed” USPS attorneys for their federal institutional client’s behavior and further ordered the agency to make a senior official available for a second afternoon hearing in order to provide testimony on internal USPS procedures.

“I would like you to explain just what the heck happened yesterday,” Sullivan said during the hearing where at one point he suggested an openness to calling Postmaster General Louis DeJoy as a witness.

DeJoy hasn’t been called to account for agency’s delivery failures and courtroom compliance just yet.

But it may just be a matter of time.

On Wednesday, Sullivan ordered twice-daily sweeps of USPS facilities to continue in states which accept mail-in ballots mailed before — but delivered after — Election Day.

Read the full court filing below.  It contains tallies for the first and second USPS ballot sweeps: