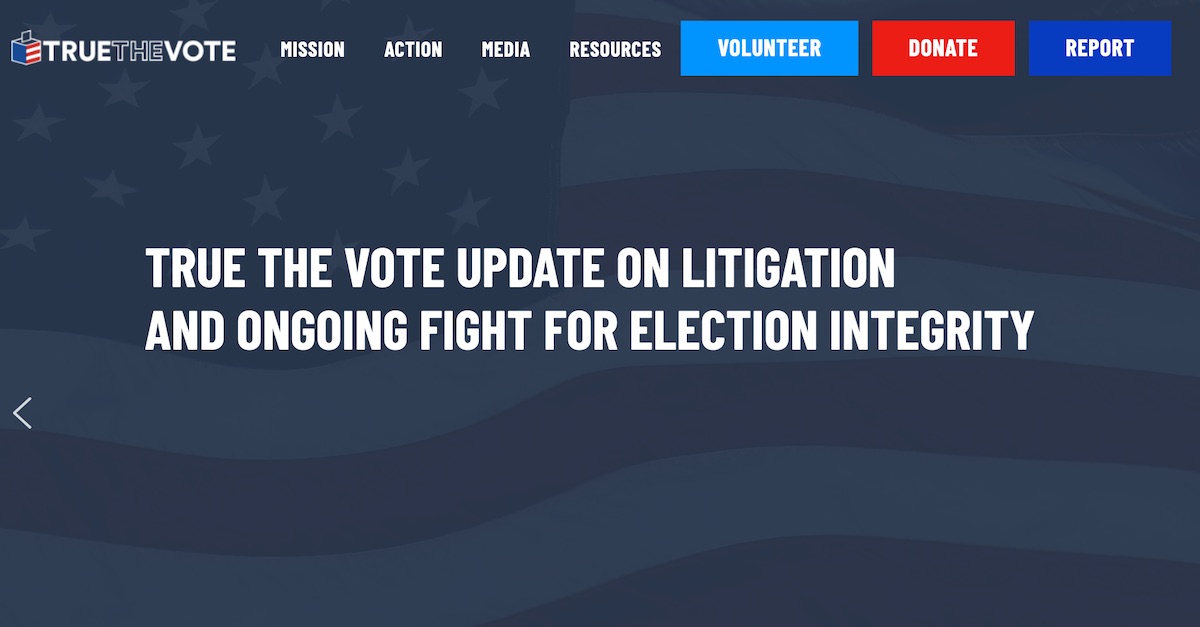 True the Vote, one in a constellation of pro-Trump charities behind last-gasp lawsuits to overturn the presidential election, is “misrepresenting” the company’s address at the location of a tax office that never heard of them, according to court papers filed on Monday.

The accusation came from the charity’s unhappy investor, Fred Eshelman, who poured $2.5 million into True the Vote in the hopes that it would find and investigate fraud in the 2020 presidential election. The charity filed and quickly withdrew four lawsuits instead, leaving Eshelman with nothing to show for his investment except a federal lawsuit seeking his money back.

Eshelman escalated his legal offensive against the charity on Monday, asking a judge to issue an injunction blocking True the Vote from spending his money and putting discovery in his lawsuit on the fast track.

“After filing this lawsuit, Mr. Eshelman discovered that the address defendant identified on the Secretary of State’s website as the address for its registered agent (Ms. Engelbrecht) is occupied by an unrelated business that has never heard of Ms. Engelbrecht,” Eshelman’s attorney Meghan McCaig wrote in an 8-page motion. “In addition, the other address identified by defendant on the Secretary of State’s website is a tax office that is ‘closed until tax season.’ In short, defendant is, at a minimum, misrepresenting the location of its operations to the public. Mr. Eshelman fears Defendant is also misrepresenting the extent and nature of its operations.”

Asked about the discrepancy, Engelbrecht called the matter nothing more exotic than a failure to update paperwork by an accountant.

“First, it should be noted, we are in good standing with the state,” she told Law&Crime in an email.

“The FM 249 address was to our accountant, used to help ensure that state related mailings got directly to them,” she wrote. “They’d changed addresses and apparently didn’t update the change in this particular record. We typically file online, so it was easy to overlook. As a consequence of today’s filing, I logged in to our account in the state’s portal and changed the address to match our tax records.”

The decade-old True the Vote only lists a Houston-based post office box on its non-profit paperwork, and Eshelman’s lawsuit alleges that it coordinated with the Trump campaign on its ill-fated litigation.

“The decision to abandon those cases was made in concert with counsel for the Trump campaign,” Eshelman’s lawsuit alleged.

Eshelman claims that Engelbrecht and powerhouse Republican lawyer James Bopp allowed him to make a conditional donation based on verifiable efforts, before walking back on that promise.

“Those requests [for a refund], however, were met with platitudes and empty promises of follow-up,” Eshelman complained, adding that “nothing was accomplished” with the money he spent.

Engelbrecht previously told Law&Crime that the charity did not solicit Eshelman’s donation, which she claimed came unsolicited via unspecified consultants.

“When the consultants called us on November 5, it seemed like an answer to prayer,” Engelbrecht previously wrote in an email through True the Vote’s representative. “Now, it seems like a nightmare.”

Eshelman’s motion for a preliminary injunction suggests his unfavorable experience with True the Vote has not soured him on like-minded charities.

“Mr. Eshelman has been and remains committed to upholding the rights of U.S. voters,” his legal brief states. “Thus, to the extent that Mr. Eshelman seeks to fund other more active and effective efforts focused on electoral integrity, he would be precluded from doing so if defendant is allowed to further dissipate the funds. Ultimately, the public interest will best be served by ensuring that Mr. Eshelman’s money is not dissipated.”

All of those efforts have failed, and perhaps seeing the futility of their pending appeals, Wood and Powell have endorsed martial law as a solution to maintain Trump’s grip on power that he could not maintain through the ballot or the courts.