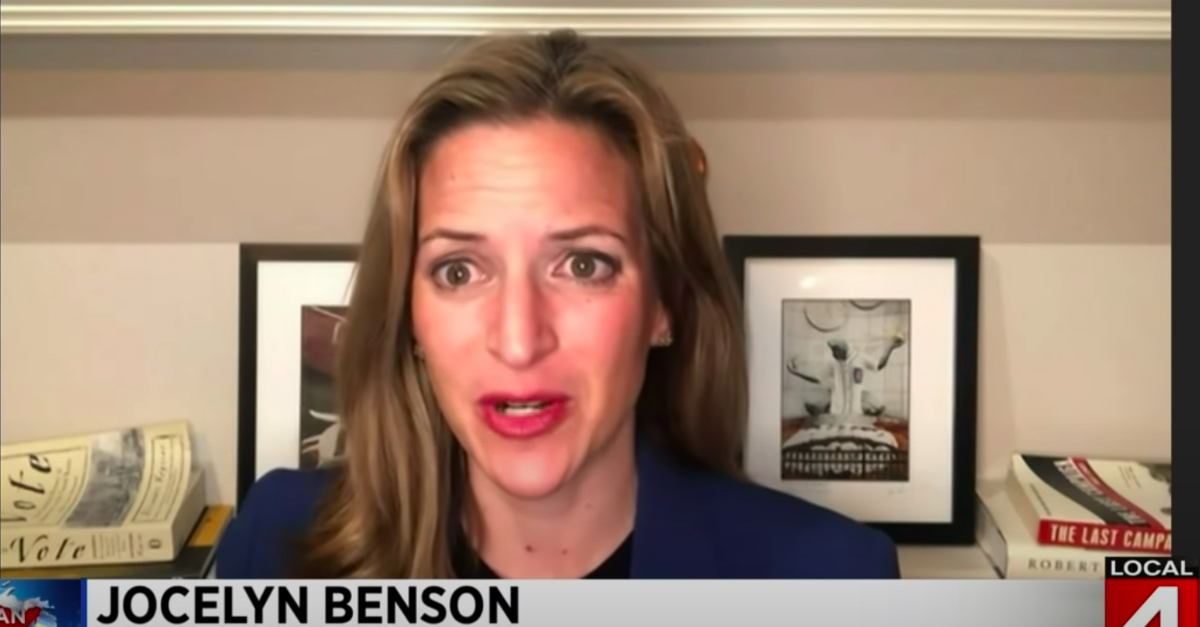 A Michigan judge on Wednesday sided with Secretary of State Jocelyn Benson (D) in the state’s high-profile battle over mail-in voting, dismissing three consolidated lawsuits challenging her authority to send mail-in voting ballot applications to 7.7 million registered voters. Two of the lawsuits were filed by Yvonne Black and Nevin Cooper-Keel, a pair of former Republican candidates for the state House of Representatives who went on to lose their primary elections.

Court of Claims Judge Cynthia Diane Stephens, who rejected the plaintiffs’ request for an injunction halting Benson’s order in June, said authorizing that ballot applications be sent to all registered voters–including those who did not request them—was unambiguously within the purview of her power as the state’s chief election official.

“Defendant has clear and broad authority to provide advice and direction with respect to the conduct of elections and registrations. That is all she has done here: she has provided direction for conducting an election during an unprecedented global pandemic involving a highly contagious respiratory virus,” Stephens wrote, according to local news outlet Michigan Live.

Stephens emphasized that Benson’s decision to start mailing out the ballot applications in May came amid “an unprecedented global pandemic involving a highly contagious respiratory virus,” saying the effort was not contrary to state law, which allows citizens to vote via mail for any reason.

“Given the ubiquitous attention paid to the importance of social distancing and limiting large gatherings, particularly indoor gatherings, the notion that it would be advisable to inform this state’s electorate of its constitutional right to vote by absentee ballot, as opposed to in-person voting, cannot reasonably be disputed. Furthermore, it must be noted that all that has been sent are applications for absent voter ballots, not absent voter ballots themselves,” Stephens wrote. “There is no merit to any contention by plaintiffs that (Benson’s) actions were contrary to the Michigan Election Law.”

According to the Associated Press, a record 2.5 million votes were cast in the state’s primary elections earlier this month, which included a record 1.6 million absentee ballots sent via mail or local drop boxes.

President Donald Trump in May falsely claimed that sending absentee ballots applications to all of the state’s 7.7 million eligible voters was done “illegally,” before threatening to withhold congressionally approved federal funds from the state.

“Breaking: Michigan sends absentee ballots to 7.7 million people ahead of Primaries and the General Election. This was done illegally and without authorization by a rogue Secretary of State. I will ask to hold up funding to Michigan if they want to go down this Voter Fraud path!” he wrote in a tweet that was later deleted.

Benson spoke during last week’s Democratic National Convention, where she emphasized that there was no difference between mail-in voting and absentee voting, and pointed out that President Trump and most of his family and staff vote via mail.

“There is absolutely zero difference between voting by mail and voting absentee,” Benson said during her remarks. “Millions of Americans have been voting absentee for decades. Donald Trump, his family, his staff, they all vote by mail.”