Lawyer Fired After Recording Himself in D.C. on Jan. 6 Finally Corrects Rookie Legal Mistake, Asks Judge for Do-Over of 2020 Election 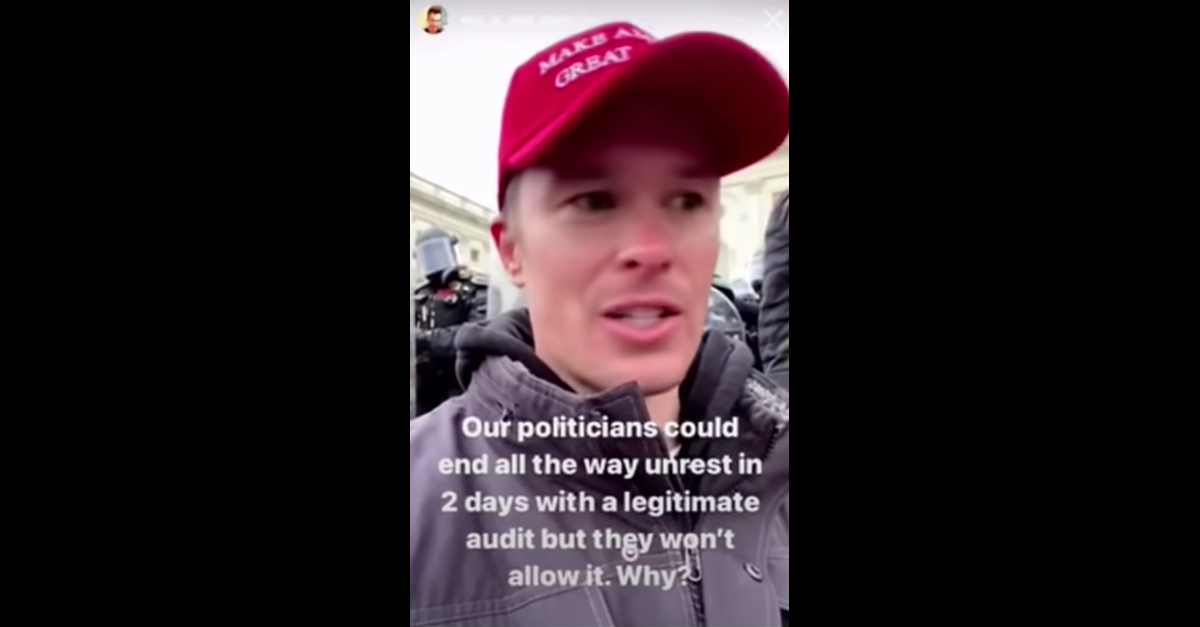 Texas Attorney Paul M. Davis, who lost his in-house counsel job after he posted video of himself wearing a red “Make America Great Again” hat at the pro-Trump siege on the U.S. Capitol on Jan. 6, is litigating yet again.

A recap for context is necessary. Davis used his post-employment days and weeks after the failed siege to file a lawsuit which asked a judge to declare Trump’s second impeachment trial “null and void.” He then cited the Lord of the Rings in a later filing. In that subsequent request, Davis asked a judge to appoint “stewards” to oversee the United States Government because, in Davis’s words, “Gondor has no king.” (Davis analogized the United States under President Joe Biden to the fictional Kingdom of Gondor before the return of Aragorn, its true king; Davis demanded that a federal judge name a steward or stewards, similar to Denethor II, to manage the country. In essence, Davis asked the judge to shred the U.S. Constitution and to create an entirely new system of American government.) Davis eventually claimed that his legal theories were concocted as the partial result of “sleep deprivation” and a “massive sewage backup.” Naturally, a judge poo-pooed Davis’s claims by issuing a show-cause order. The order demanded that Davis either amend his complaint by Feb. 10 or watch it be flushed out to sea, proverbially speaking.

The judge’s four-page order raised two key legal arguments.First, it said Davis was incorrect to use the so-called “Help America Vote Act” (HAVA) to raise claims on behalf of his named plaintiffs — who are individual voters and groups of voters who allege their votes were diluted in the 2020 election — because HAVA “does not provide the declaratory relief” Davis and his plaintiffs sought. Second, the judge, Alan D. Albright of the Western District of Texas, said Davis’s attempt to use a federal civil rights law, 42 U.S.C. § 1983, against federal officers was misplaced.

Davis finally wised up on the latter issue, which Law&Crime has been hesitant to point out until now because we’re not litigating Davis’s case. The solution was for Davis to plead a so-called “Bivens” action, named after Bivens v. Six Unknown Named Agents of Fed. Bureau of Narcotics, a 1971 U.S. Supreme Court case. In short, the statute Davis cited, 42 U.S.C. § 1983, is a federal statue which allows plaintiffs to sue state and local actors for civil rights abuses and violations. The Bivens decision allows plaintiffs to sue federal actors for civil rights abuses and violations.

Davis fixed that matter and thus made it harder to for the judge to dismiss the lawsuit on that simple but important technical ground.

Law&Crime noted that the judge refused to characterize Davis’s § 1983 claim as a Bivens claim. That suggests the judge is not being terribly kind to Davis.

But Davis’s core allegations are anything but orthodox:

This Lawsuit is about how both state and federal officials acted together as both “Democrats” and “Republicans” and as part of a “well-funded cabal” and “conspiracy” with various private persons, including persons in the news media, social media, and technology industry, high net worth individuals, and others, to willfully deprive the American People of their “most precious” and fundamental right:  the right to the “Republican Form of Government” guaranteed by Article IV, Section 4 (the “Guarantee Clause”) of the Constitution of the United States and other fundamental civil rights.

Davis cites to a Time Magazine article in an attempt to prove his theories — and accuses his naysayers of name-calling:

A conspiracy to deprive Americans of the republican form of government, a form of government that has existed (albeit to an ever-diminishing extent) since the Constitution of the United States went into effect in March of 1789, would obviously need to be well-funded, with many moving parts and actors in powerful places, and would need to be secret, since an overwhelming majority of Americans, presumably, still strongly believe in government “of the people, by the people, and for the people.” Describing such a conspiracy to the Court is a monumentally difficult task in a time where any attempt to contravene the prevailing narrative in popular news media and on social media is immediately dismissed as a “conspiracy theory” and its progenitors labeled as “crackpots.”

He refers to the Time Magazine article as “Secret History,” but in at least one place he calls it “Secrete History” — likely a typo and not a Freudian slip toward that “massive sewage backup”:

Secret History gives a shocking detailed account about how the 2020 Federal Election had almost nothing to do with the “will of the people.” Instead, it had everything to do with a power struggle between a “well- funded cabal of powerful people” (the “Cabal”) and President Donald Trump, based apparently, on who had the best method of manipulating the election process in violation of the law and the constitutional rights of the American People.

Davis goes on to describe “a truly disturbing ‘battle’ between the Cabal and Trump, where the two camps try to outmaneuver each other to influence certification of the Michigan vote.” He then quotes the Time Magazine article as such:

The pro-democracy forces were up against a Trumpified Michigan GOP controlled by allies of Ronna McDaniel, the Republican National Committee chair, and Betsy DeVos, the former Education Secretary and a member of a billionaire family of GOP donors. On a call with his team on Nov. 18, [Project Democracy Co-Founder Ian] Bassin vented that his side’s pressure was no match for what Trump could offer. “Of course he’s going to try to offer them something,” Bassin recalls thinking. “Head of the Space Force! Ambassador to wherever! We can’t compete with that by offering carrots. We need a stick.”

Davis then refers to Molly Ball, the Time Magazine piece’s author, as “an obvious sycophant” who — in his opinion — erroneously spent time and words “bragging about the efforts of these shadowy characters, acting behind the scenes to manipulate the election outcome, as heroic.” He says it was inappropriate for Ball to cast the “Cabal” — a group Ball described as an “informal alliance between left-wing activists and business titans” — as “protagonists” simply because they “opposed the wicked villain, Donald Trump.”

Davis says the voters really wanted Donald Trump and would have chosen him but for this alleged interference by the “Cabal.” Again, from Davis’s court papers:

Secret History is written in language to give the appearance that the Cabal acted out of some grave concern for “democracy,” when in fact it reveals the exact opposite. The Cabal carried out their conspiracy out of fear that people would actually vote for Donald Trump.

Davis also says his reliance on a mainstream media article should prevent the media from attacking his legal conclusions or any concomitant court ruling in his favor.

Secret History also prevents the media from attacking the Court for any relief granted supporting Plaintiffs so-called “tin foil hat conspiracy theories,” as the media would surely have attempted to do because Plaintiffs’ allegations now come straight from one of the most well-respected and widely circulated publications, TIME.

Among Davis’s claims is that various “nefarious” actors (e.g., the named defendants) conspired with Congress and even ran for and successfully obtained elected office in order to spend money on elections reforms, including increasing access to mail-in voting, thus diluting the vote of the plaintiffs who supported Donald Trump.

In an unorthodox paragraph Davis called a “conclusion to [an] introduction,” Davis says the plaintiffs he represents were so deprived of their constitutional rights through “an election that cannot now be audited to determine the rightful winner” that “the only appropriate remedy is a new election . . . and additional security measures that should be imposed by the Court.”

That — yet again, he alleges — apparently means shutting down the current U.S. Government:

The Court must ensure a new Federal Election and enter temporary injunctive relief restraining the illegitimate Congress and Executive Branch until a jury trial on the merits, so that all Americans can, once again, be assured that “government of the people, by the people, and for the people, shall not perish from the earth.”

The named defendants are the entire 117th U.S. Congress, Rep. Pete Sessions (R-Texas), Rep. Mitch McConnell (R-Ky.) Rep. Nancy Pelosi (R-Calif.), Facebook CEO Mark Zuckerberg, Senate Majority Leader Chuck Schumer (D-N.Y.), Rep. Alexandria Ocasio-Cortez (D-N.Y.), Georgia Secretary of State Brad Raffensperger (a Republican), and others. A full list of defendants is attached as an exhibit. Included are Roger Sollenberger, a writer with Salon.com whom Davis claims is part of a “conspiracy” against him. Sollenberger is the one who identified Davis on Twitter as being among the people at the U.S. Capitol on Jan. 6.

This is Paul Davis. Paul is a lawyer. He’s also associate general counsel & director of human resources at Goosehead Insurance. Today he stormed the capitol building in an attempt to stage a coup against the US government and documented it (!) on Instagram. @followgoosehead pic.twitter.com/eTkoK92ujL

Among Davis’s allegations are that Fox News was in on the alleged steal with Facebook CEO Mark Zuckerberg.

Davis further complains that social media warnings of misinformation, which were attached to some of his plaintiffs’ posts, were part of a conspiracy to deprive his plaintiffs of their First Amendment rights due to the defendants’ “discriminatory animus against Plaintiffs for their political views and support of particular candidates.” (Reality check: private companies do not have to follow the First Amendment; it applies to the government only.)

Davis further claims that some lawmakers ran for office, were elected, and passed COVID-19 relief laws which conflicted with old voting laws — all in an effort to block the plaintiffs from successfully voting Trump into office:

(Side note: the laws passed by legislatures are presumed to be constitutional; Davis doesn’t address that core starting point of legal interpretation. Additionally, conflicts of laws sometimes occur at the state and federal levels; all attempts are made to avoid it, but it does happen. Courts and attorneys apply various legal rules and analyses to deal with it.)

The document alleges seven causes of actions and asks a federal judge to certify the plaintiffs as a class for purposes of a class action lawsuit.

A full page and a half of the document extolls Davis’s experience as a litigator.

Here’s what he’s asking the judge to order (including money for himself):

Davis took care to note that his goal is not to ask the court to “reinstall” Trump as president.

In previous court documents, Davis, who has not been charged in connection with the siege on the U.S. Capitol on Jan. 6, asked a federal judge to prevent his arrest — should authorities move against him — so that the election can be sorted out according to his demands.

TL;DR: Davis appears to be complaining that a group he calls the “Cabal” convinced people to vote for Joe Biden and that its strategy diluted votes for Trump. Thus, he contends, a federal judge should tear down significant portions of the U.S. Government and order a new election in order to sort things out.

[image of Paul M. Davis via Social Media by way of KDFW-TV]