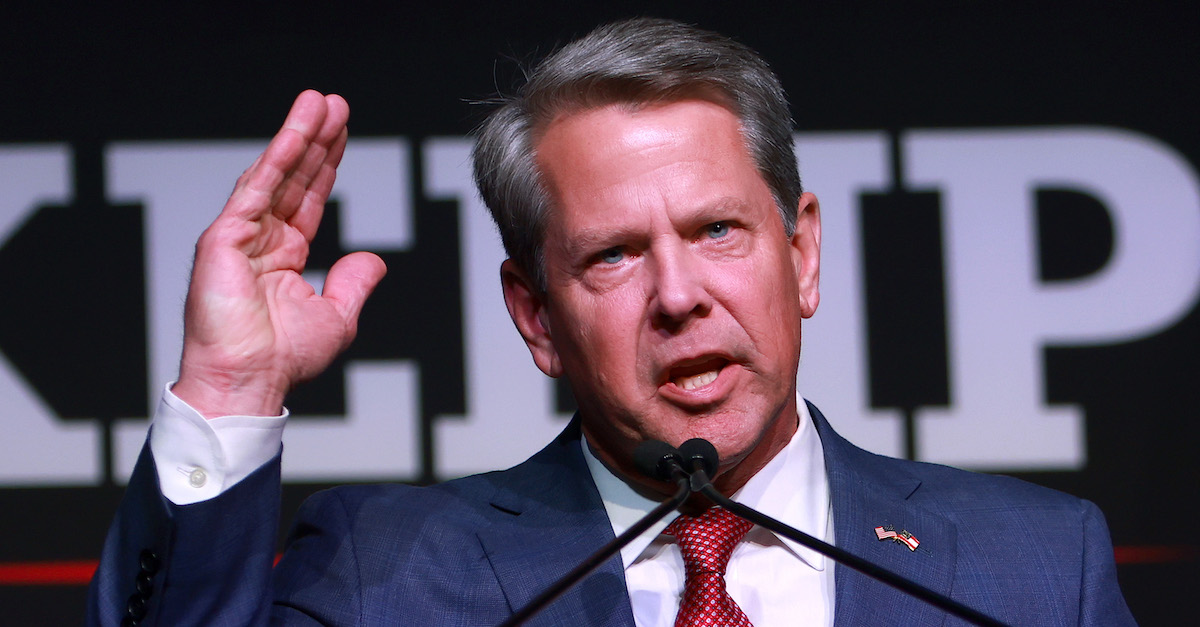 Gov. Brian Kemp speaks during his primary night election party at the Chick-fil-A College Football Hall of Fame on May 24, 2022 in Atlanta, Georgia.

Georgia Gov. Brian Kemp (R) has asked a Fulton County judge to block the county prosecutor’s effort to question him about alleged efforts by former President Donald Trump to interfere with the results of the 2020 presidential election.

Fulton County District Attorney Fani Willis (D) has launched an expansive investigation into efforts to overturn Joe Biden’s win in Georgia — the first time a Democratic presidential candidate had taken the Peach State since Bill Clinton’s 1992 victory. In the weeks after the 2020 election, Kemp had refused to cave to pressure from the then-president, who had urged him to block certification of the vote. Kemp had said that state law prevented him from doing so.

In a Motion to Quash filed Wednesday, Kemp had three reasons for why he shouldn’t be required to respond to the subpoena. First, Kemp argued, “it is barred by sovereign immunity.” The subpoena also “improperly seeks to invade established common law executive and attorney-client privileges,” and, according to Kemp, “is being pursued at this time for improper political purposes.”

Kemp, through his lawyer Brian McEvoy, accuses the office of DA Willis of having “engineered the Governor’s interaction with the investigation to reach a crescendo in the middle of the election cycle.” According to the motion, Kemp made “repeated efforts” to engage with the DA’s office before this year and before announcing his re-election campaign, even going so far as to offer to sit for an interview on July 25, 2022.

“[B]ut when counsel for the Governor asked reasonable questions of the DA’s Office regarding the scope of that interview, the DA’s office unilaterally canceled the interview and issued the Subpoena,” the motion says. “Why the DA’s Office acted so abruptly is unclear.”

Emails attached to the motion appear to show communication between Kemp’s lawyer, Brian McEvoy, and Willis’ office, including emails from Willis herself, regarding scheduling Kemp’s interview and documents Kemp has provided in response to the subpoena.

Kemp says that sovereign immunity protects him from the subpoena because it is “directed toward the Governor in his official capacity,” and Kemp has not taken actions that would waive immunity.

“The Subpoena seeks testimony in a state court legal proceeding regarding facts and circumstances relating directly or indirectly to possible attempts to disrupt the lawful administration of the 2020 elections in the State of Georgia,” the motion says. “Any insight the Governor may have on these topics necessarily arises entirely from the performance of his official duties as Governor. The DA’s Office has not asserted — nor could it truthfully assert — that the Governor acted at any time outside of the scope of his official duties in connection with those matters.”

The motion also says the subpoena “ignores entirely the substantial privileges the Governor has (and indeed requires) to perform his official duties as the Chief Executive Officer of the State.”

Kemp cites both the “deliberative process privilege,” which he says “allows the government to withhold documents and other materials that would reveal advisory opinions, recommendations and deliberations comprising part of a process by which governmental decisions and policies are formulated,” as well as the “executive communications privilege,” which he says protects from disclosure materials and testimony about “communications with his advisors and [] notes and drafts that he prepared” in connection with his decision-making “before, during and after the November 2020 election.”

Kemp’s motion argues that the DA’s office will not be able to meet its burden to show a specific need for the material in order to qualify the privilege, in part because “it can obtain the evidence it seeks from alternate sources who are for more appropriate subjects for discovery requests from in any event.”

Accusing Willis’ office of displaying a “feigned sense of urgency,” the motion also says the issuance of the subpoena was timed only for political gain.

“If the DA’s Office were considerate of principles encouraging prosecutors to minimize the political impact of their investigations, it would have either considered conducting its interview well in advance of the 2022 election — which counsel for the Governor attempted to coordinate — or delayed its requests to the Governor until after the impeding election — a request that counsel for the Governor has made on numerous occasions,” the motion says. “Instead, it has taken the opposite approach which, regrettably, reveals a suspect political motive: intentionally delaying the Governor’s involvement until an election cycle was ongoing and then expressly demanding compliance before the 2022 election.”

Kemp suggests that the subpoena could have waited until after the upcoming midterm elections, since the special purpose grand jury has been authorized to continue until May 2023.

The investigation has so far encompassed some of those considered closest to the one-time president: stalwart Trump ally and lawyer Rudy Giuliani testified before the grand jury on Wednesday, and South Carolina Sen. Lindsey Graham (R) recently lost his bid to quash a subpoena in the matter after it was discovered that Graham had called Georgia Secretary of State and members of his staff at least twice in the weeks following the election. The senator is now seeking a stay.