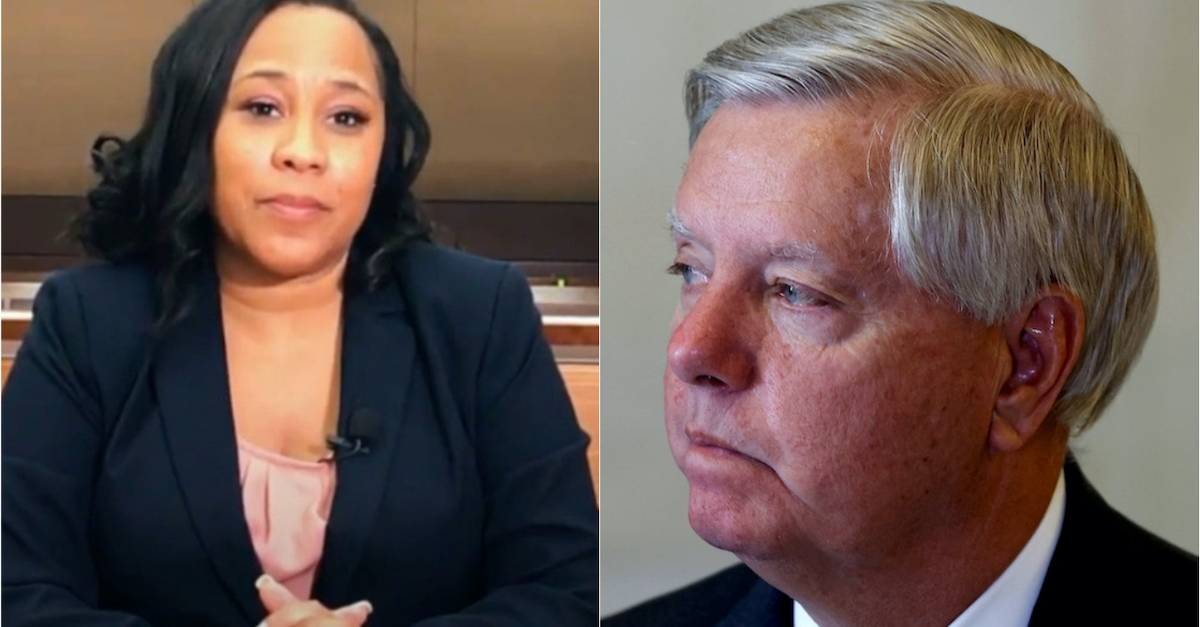 Fulton County District Attorney Fani Willis (D) asked a federal judge in South Carolina on Monday to reject Lindsey Graham’s motion to quash her subpoena. Addressing the Donald Trump loyalist throughout her legal brief as “Mr. Graham,” her office pointedly avoided referring to the Republican by his title as a senator — and explained why in a footnote.

Willis’ outside counsel said that doing so makes clear they don’t agree Graham was acting in his official senatorial capacity when he called Georgia Secretary of State Brad Raffensperger (R) to discuss the state’s 2020 presidential vote count.

The 11-page filing says Graham has not yet been served with a subpoena or a material witness warrant in South Carolina, so his motion is premature.

“Mr. Graham seeks a ruling on a matter that is not ripe for judicial attention,” according to the motion from Christopher W. Adams of Adams Bischoff LLC in Charleston, South Carolina.

Adams also said the order Willis obtained from Fulton County Superior Court Judge Robert McBurney allows for Graham to be served in Washington, D.C. or South Carolina, so may not end up being served in the Palmetto State.

Signed on July 8, McBurney’s order allows for Willis’ office to serve Graham with a subpoena or warrant for in-person testimony in a Georgia courtroom between Aug. 2 and Aug. 31. At issue are two calls Graham made to Raffensperger in which Graham asked about re-examining absentee ballots from the 2020 presidential election.

Graham’s July 12 motion seeks as an alternative to quashing removal to federal court, but Adams said the lack of an actual subpoena or warrant again moots such a request.

Thus, there is no case or controversy in a South Carolina court to be removed to federal court.

“If a dispute is insufficiently developed, any potential injury or stake is too speculative to warrant judicial action,” according to the filing.

But even if there was an existing criminal prosecution, a federal judge can decline to remove it, and Adams says courts have traditionally “been even more reluctant to interfere with the mere service of a subpoena rather than a criminal trial.” He also said if the the unserved warrant were removed to federal court, the only issue that could be decided is the issuance of the actual warrant, not “hypothetical privilege issues that may arise during the testimony of Mr. Graham.”

“Those issues would be appropriately raised either to Judge McBurney in Fulton County Superior Court or be removed to the United States District Court in the Northern District of Georgia for resolution,” Adams wrote.

Adams’ motion follows the 13-page motion from Graham’s attorneys E. Bart Daniel and Matt Austin of Nelson Mullins Riley & Scarborough LLP, who argue the senator is immune from having to testify under the U.S. Constitution’s speech or debate clause because it states members of Congress “shall not be questioned in any other place.”

That’s the argument that prompted Adams to explain his omission of Graham’s official title, writing: “We do not intend for this to be in any way insulting.”

“Rather, we refer to him as Mr. Graham to make clear that we do not agree with opposing counsel’s assertion that Mr. Graham was operating in his official capacity when he called the Georgia Secretary of State related to the Georgia vote count,” according to the footnote.

A status conference is scheduled for Wednesday at 10 a.m. before U.S. District Judge David C. Norton in Charleston, South Carolina.
Read the DA’s legal brief below:

(Screengrab of Willis via Fulton County; Photo of Graham via Anna Moneymaker/Getty Images)