‘Are You F***ing Kidding?’: Outrage After Nevada Dems Invite Candidate Reps to Act as Precinct Chairs 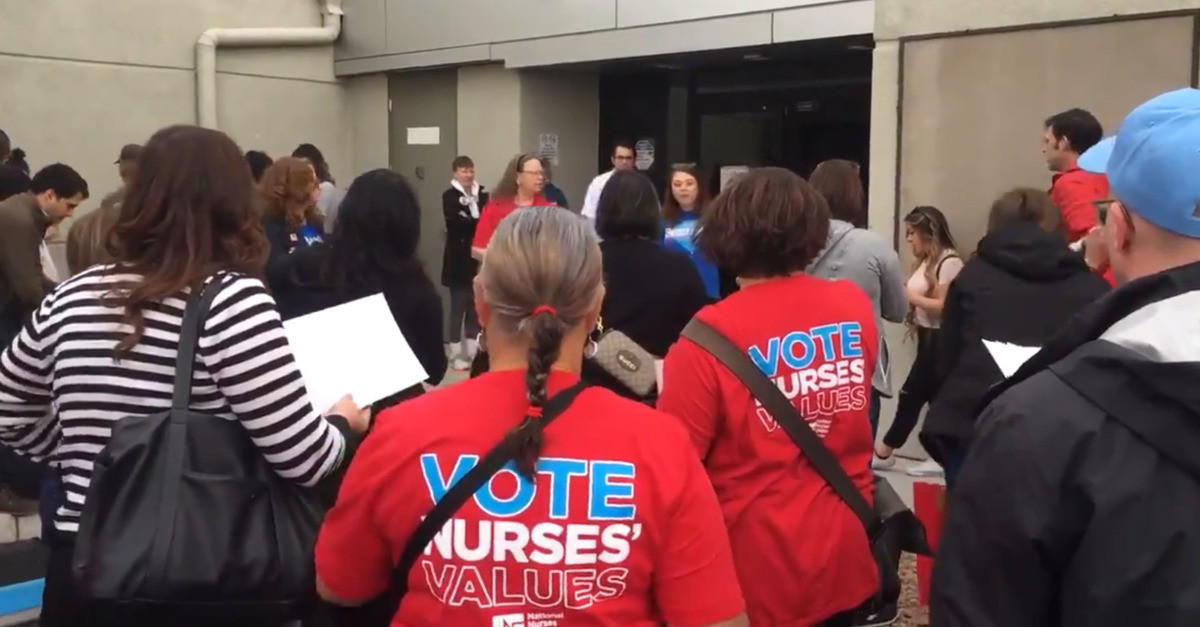 Nevada typically defends its prestigious place as the third presidential contest overall with the saying “We Matter.” But the Nevada Democratic Party appears hellbent on replicating the chaos from the Iowa debacle. With just a little western flair.

Their latest suggestion on how to evoke the nightmarish memories of a caucus gone wrong was put out just today–moments before the caucus process officially began.

Nevada State Democratic Party officials are reportedly “telling campaign representatives that there’s a deficit of volunteers across the state, and so they are asking representatives of campaigns to act as precinct chairs,” according to Politico’s Laura Barrón-López.

Uhhhhhhh what the fuck, no, that is not a good idea, are you fucking kidding??? https://t.co/eGrheS1ZGI

“I’m at Spring Valley High School and a lot of the Nevada Dem Party volunteers did not show up,” one Democratic Party source noted. “They are worried about the precinct chairs showing up as well.”

“Desert Oasis High School just announced that they don’t have the registrations or the early ballots yet,” she said. “They are on the way.”

No fewer than four campaigns who responded to the state party’s request–by supplying partisan representatives to lead the nominally democratic process–shared the news with media in an apparent attempt to bring light to such concerns.

“There isn’t a shortage at every site,” Barrón-López noted in a subsequent tweet. “Difficult to say at this point what impact it has or if it will translate to any real delay.”

One Nevada Democrat, perhaps mindful of the narrative, sought to allay concerns, telling that reaching out to campaigns is a “standard ask” in such cases–which, if true, raises questions as to the motivations of so many campaigns who felt the need to stop the presses and speak out about those requests.

Multiple Democrats and campaigns in the Silver State have reported a shortage of volunteers–but the tell-tale signs of insufficient preparation have been there for awhile. After various technical concerns over whether the party would use an app or a native iPad “tool,” leaders settled on recording data using Google Docs.

Then there was a frantic email from Democratic National Committee member Khary Penebaker sent out on February 13–calling for additional help just two days before early voting began.

“The NV Dems are hosting the First in the West Caucus and need your help,” he wrote. “This 2020 Caucus will be Nevada’s most expansive, transparent, and accessible caucus yet and will build the foundation in Nevada to defeat Donald Trump. We will need help in a number of different ways leading up to and during Early Vote, Saturday, Feb. 15 – Tuesday, Feb. 18, and on Caucus Day, Saturday, Feb. 22.”

This latest controversy compounds upon that basic lack of preparedness and late-stage bad press about the first-in-the-west presidential primary which has steadily decreased confidence in the overall process and party overseeing those results.

And the typical caucus chaos was an apparently egregious bit of rule-breaking from Sen. Elizabeth Warren‘s leading surrogate:

Julian Castro is at the caucus site im at and just gave a speech to a precinct about supporting Warren although it’s against the rules for anyone not caucusing to do electioneering in the room. He told me he was “told it was okay,” before immediately leaving the room

And, of course, a caucus in Nevada wouldn’t be complete without allegations of shenanigans targeting Sen. Bernie Sanders:

Volunteer caucus observers for Bernie being told we can’t canvas the line or talk to people outside the caucus, and we can’t bring any materials inside. Just watched Biden crew bring in boxes of materials with no issue.#NVCaucus #MojaveHighSchool #NevadaCaucus

And then there’s the math:

Slight confusion over viability here at one #NVcaucus site as Steyer hits 17 voters in one precinct. Viability requires 15 percent of total vote, so at 17.7 voters required, he doesn’t make the cut. pic.twitter.com/90ys89QVSS