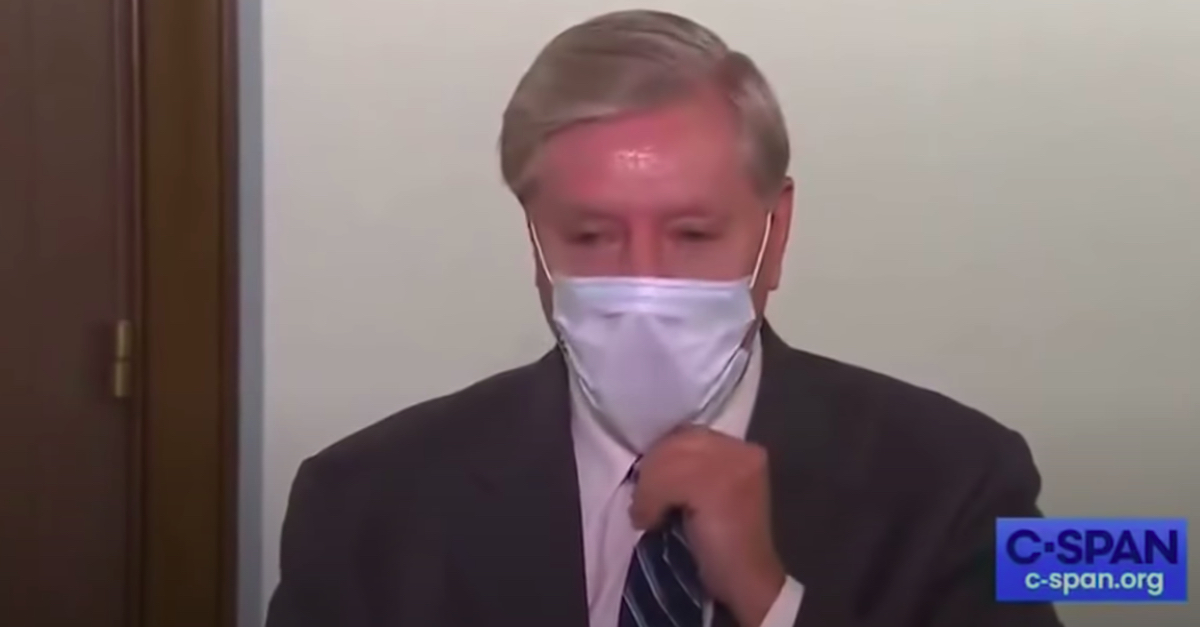 In the midst of a heated Senate race with Democratic challenger Jaime Harrison, Sen. Lindsey Graham (R-S.C.) is accused of illegally soliciting donations to his campaign following the Wednesday confirmation hearings for Supreme Court nominee Amy Coney Barrett. The South Carolina Republican and chairman of the Senate Judiciary Committee is coming off a third quarter where Harrison outraised his campaign by nearly $30 million.

“I think people in South Carolina are excited about Judge Barrett. I don’t know how much it affected fundraising today, but if you want to help me close the gap, LindseyGraham.com, a little bit goes a long way,” Graham said from inside the Hart Senate Office Building following Wednesday’s proceedings.

“The bottom line is my opponent raised $57 million. Congratulations to him, that’s the most anybody’s ever raised in the history of the Senate. I raised $28 million, the most any Republican has ever raised. I think the contest in South Carolina has taken on sort of a national profile. I think what’s happened in my case is that I stood up for [Justice Brett] Kavanaugh, and that made some people pretty upset on the left.”

It’s illegal to solicit campaign contributions inside a federal building.

But as several attorneys and journalists pointed out, Graham’s plea for money may have constituted a violation of federal law and Senate ethics rules, both of which prohibit elected officials from soliciting donations from inside federal buildings.

Under 18 U.S. Code § 607, it is unlawful for “Members of Congress, to solicit or receive a donation of money or other thing of value in connection with a Federal, State, or local election, while in any room or building occupied in the discharge of official duties by an officer or employee of the United States, from any person.”

Additionally, under “General Prohibitions,” the U.S. Senate Select Committee on Ethics states that “Senate Members and staff may not receive or solicit campaign contributions in any federal building,” citing to 18 U.S. Code § 607.

Attorney Marc E. Elias, a Democrat working for the Biden campaign who specializes in voter rights and election law, called out Graham on Twitter following the comments.

“Senator Graham might need a lawyer,” he wrote, also citing to the text of §607.

Senator Graham might need a lawyer: "It shall be unlawful for…Members of Congress, to solicit or receive a donation of money or other thing of value in connection with a Federal election, while in any room or building occupied in the discharge of official duties." 18 USC 607 https://t.co/raJEztmn66

“This is a crime. [Lindsey Graham] committed a crime in plain sight,” Swalwell tweeted.

This is a crime. @LindseyGrahamSC committed a crime in plain sight. https://t.co/ZySdwtzfXW

“Not that [Attorney General Bill] Barr will prosecute this, but senators leave their offices and make fundraising calls from their cars (no, really) because it’s a crime to solicit contributions inside a federal building. Doing it on camera is next-level,” he tweeted.

Not that Barr will prosecute this, but senators leave their offices and make fundraising calls from their cars (no, really) because it’s a crime to solicit contributions inside a federal building.

Doing it on camera is next-level. https://t.co/OfUPkuUICA

In a statement to ABC News 4, Graham’s spokesperson Kevin Bishop said any unlawful behavior was “unintentional.”

“Senator Graham was responding to reporters’ questions about his campaign and fundraising. Confident any reasonable person can see that any violation – if one even occurred – was unintentional and does not represent a pattern of behavior,” Bishop said, though the statute does not require the conduct be intentional or repetitive.

The South Carolina Democratic Party (SCDP), however, had a different take.

“After 25 years in Washington, Sen. Graham should know better than to spend his time campaigning in the halls of Congress,” Lauren Brown, SCDP Communications Director told ABC News 4. “This profile in desperate and unethical behavior is unbecoming of a U.S. Senator — and it is yet another demonstration of why Sen. Graham’s time in Congress is coming to an end.”