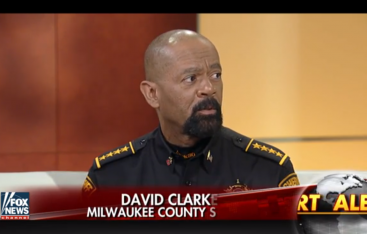 Milwaukee County Sheriff David Clarke joined Fox and Friends this morning to discuss news that the FBI managed to unlock the San Bernardino terrorist’s iPhone without the help of Apple and he was very critical about how the whole thing unfolded in public.

Sheriff Clarke began by saying that didn’t feel as though the public has been told the entire story about this matter.  He then said he is concerned that the FBI may have lost a lot credibility with its “saber rattling” and “the sky is falling rhetoric” about the need to get into the phone to prevent an attack when it now appears as though there never was any threat of an imminent attack.

“I think you lose credibility, so the next time the FBI goes into court I think they’ll lose… I think a judge is going to be a little more dismissive of their claims…. Well, you can’t come in and sound all these alarms, you know, to get somebody — a judge — to grant the authority that they were looking for…,” Clarke said.

Sheriff Clarke recognized that it would be great for law enforcement to be able to get into any phone whenever they wanted, but he stressed that our system of laws requires a necessary balance between security and privacy.

The segment concluded with Clarke saying that he wished FBI Director James Comey would’ve called Apple CEO Tim Cook in an effort to work something out privately before all of this spilled out into the public.