President Obama Says FBI Investigations Should Not ‘Operate on Innuendo’ 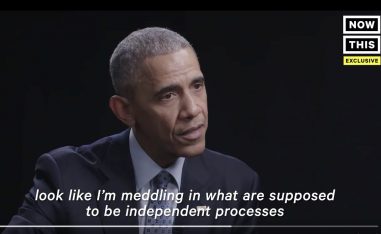 President Barack Obama finally weighed in on the reports that the FBI uncovered new emails that may be related to the investigation of Hillary Clinton’s server in an interview that aired on Wednesday.

In an interview with NowThisNews, Obama seemed to make it clear that news of the investigation has not changed his opinion of Hillary Clinton.

‘We don’t operate on innuendo’ — President Obama discusses Hillary, emails, and the FBI in an exclusive interview with NowThis pic.twitter.com/0J6tJyEYSh