Lawyer Threatens to Sue Restaurant Over $2.25 Cup of Soup 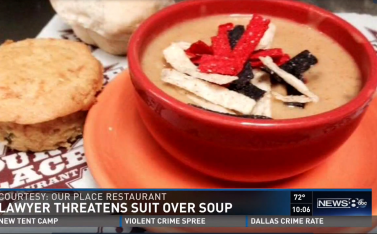 An attorney is threatening to file a lawsuit against a local restaurant in North Texas because he says the restaurant did not give him a cup of soup with his lunch order.

The lawyer, Dwain Downing, sent a demand letter to the owner of Our Place Restaurant asserting the restaurant owes him $2.25 in damages and another $250.00 in attorney’s fees.  Downing claims he ordered a meal that was advertised on the menu as including two sides and a cup of soup.  However, Downing says he did not get his soup because the restaurant ran out before he placed his order.

“This action by you and I created a binding contract which is legally enforceable in a court of law,” Downing wrote in the demand letter. “You then breached the contract by not providing the soup as promised by you.”

The restaurant owner, Benji Arslanovsk, told local news outlets that he’d never seen anything like this and he called the letter ridiculous.

“When I opened it, I was just shocked,” Arslanovsk said. “You’ve got to be kidding me… I mean, it is a cup of soup.”

Arslanovsk told reporters it is understood that the soup comes complimentary with meals and he said the menu includes the disclaimer “while supplies last.”  Arslanovsk said he tried to explain the policy, but Downing refused to listen.

“He was upset we wouldn’t substitute some veggies or a side item for his soup,” Arslanovsk told WFAA.

Arslanovsk told NBC 5 that he believes his policy is fair.

“If we’re out of green beans, and somebody wants corn instead or carrots, we’d be glad to substitute that,” he said. “But soup comes free. We make a huge pot of soup and when it’s gone, it’s gone.”

Downing was interviewed by several local news outlets via telephone.  In the interviews, he said the restaurant should prepare more soup or change its policy to either discount the cost of the meal or substitute an additional side.  He also reiterated some of the same points he made in the demand letter, including his accusation that restaurant engages in deceptive trade practices.

“They need to quit having it on the menu or have enough for the whole day,” Downing told NBC 5. “To me, it’s a deceptive trade practice.”

Arslanovsk sent the letter to his own attorney and said he will fight the issue even if it ends up costing him far more than $250.