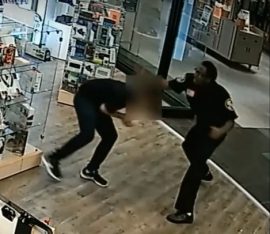 Federal and local authorities released surveillance video that shows footage captured when a man injured ten people in a knife attack at the Crossroads Mall last month in Minnesota.

Authorities explained at a press conference on Thursday that they decided to release the video at this time in the interest of transparency.  Last month, authorities say Dahir Adan entered the mall dressed in security guard uniform and armed with a pair of steak knives.    Witnesses said Adan then began trying to stab anyone he could find, yelling “Islam, Islam” and “allahu akbar” during the attack.

FBI Special Agent Rick Thornton told reporters the attack was likely premeditated and investigators believe Adan only recently became radicalized.  Adan “went from being a high achieving student with a lot of friends, to being withdrawn and flunking out of college almost overnight,” Thorton said, according to the report.

Adan was killed during the attack by local police officer Jason Falconer.

Stearns County Attorney Janelle Kendall also spoke at the press conference and told reporters her role in the investigation was to review whether Falconer was justified in using deadly force. Kendall said she concluded charges would not be filed against Officer Falconer after reviewing the evidence in the case.  Part of her review, she said, included speaking to at least 12 witnesses who all said Officer Falconer repeatedly told Adan to drop the knives before he fired his weapon.

The case is now completely under the control of the FBI as the Bureau continues to investigate Adan’s background.  In the immediate aftermath of the attacks, a known ISIS media affiliate claimed responsibility for the attack.  The FBI is continuing to review Adan’s electronic devices to investigate whether there were any direct ties to terror groups oversees.  However, his cellphone is locked and they have so far been unable to gain access to it.