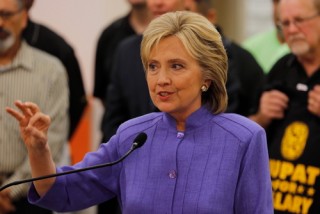 The State Department on Saturday released another 551 e-mails totaling 1,012 pages from Hillary Clinton’s private e-mail server, including 84 that have been determined to contain classified information — bringing the total number of classified e-mails found on Clinton’s server to 1,666.

A majority of the 84 classified e-mails in this new release contain information deemed  “Confidential”; three, however, were determined to contain information classified at a higher “Secret” level.  This latest revelation comes on the heels of a disclosure last month that the State Department deemed 22 of Clinton’s e-mails “Top Secret” because they contained information that would do “exceptionally grave” damage to national security if disclosed.

In spite of her campaign’s continued dismissal of the e-mail matter as a partisan witch hunt, it is safe to say that, privately, her lawyers are starting to show some concern that their client is in very real legal jeopardy based on a pair of explosive revelations last week related to the e-mail investigation.

First, as LawNewz’s Rachel Stockman explained, federal investigators looking into Clinton’s use of a private e-mail server have reportedly expanded their investigation to include potential “pay for play” allegations between the Clinton Foundation and the State Department during Clinton’s tenure as secretary of state.  This is the type of wide ranging investigation that makes defense attorneys squirm as there is often a fine line between political horse trading and public corruption.

The second matter relates to the report that claims “Top Secret” information uncovered on Clinton’s private e-mail server was disseminated to at least a dozen different e-mail accounts, including those belonging to some of Clinton’s closest aides.  This is a potential game changer because it provides evidence that may indicate Clinton could be guilty of more than just the misdemeanor crime of unauthorized removal and retention of classified information.  It opens the door to more serious felony crimes related to the unauthorized disclosure, which LawNewz founder Dan Abrams acknowledged is the type of crime prosecutors are more willing to go after.

Whoever, lawfully having possession of, access to, control over, or being entrusted with any …information relating to the national defense which information the possessor has reason to believe could be used to the injury of the United States or to the advantage of any foreign nation, willfully communicates, delivers, transmits or causes to be communicated, delivered, or transmitted or attempts to communicate, deliver, transmit or cause to be communicated, delivered or transmitted the same to any person not entitled to receive it …

Shall be fined under this title or imprisoned not more than ten years, or both.

This spells serious trouble for Clinton if it is determined that this type of information was delivered, transmitted or communicated by her, or at her direction to any one of the dozen or so e-mail account holders that do not hold the requisite security clearance for viewing such information.  If the reports are true about “Top Secret” information being disseminated amongst Clinton and her aides through e-mail, it absolutely increases the likelihood that investigators will find evidence of the sort of activity proscribed by Section 793 — whether through conduct of Clinton herself or by one or more of her aides.

It is still anyone’s guess as to whether Clinton will actually be indicted for any crimes uncovered during the investigation into her use a private e-mail server.  However, the longer this investigation continues to drag on and the more information that comes out, the worse things look for Clinton.