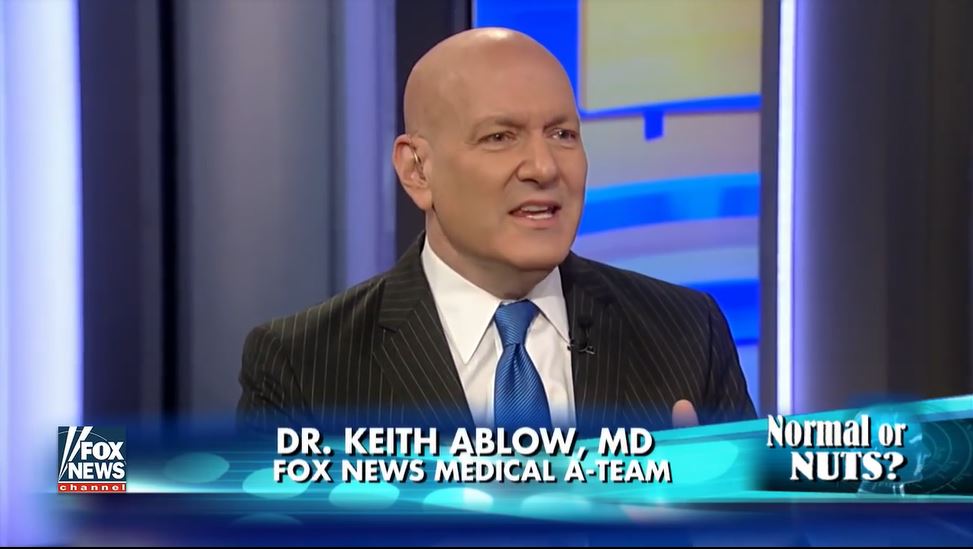 Statements allegedly made by a former Fox News commentator at an outside corporate event are among the reasons a plaintiff is accusing the host of that event of discriminating against women, a liberal media watchdog group has pointed out. The watchdog group, Media Matters For America, named the former commentator, Dr. Keith Ablow, after the New York Times reported on the lawsuit.

READ THE FULL COMPLAINT BELOW.

The underlying lawsuit, filed Monday by Lauren Bonner, alleges that investment firm Point72 Asset Management, led by Wall Street billionaire Steven Cohen, paid women less than men, allowed male colleagues to refer to women as “girls” and “sweethearts,” excluded women from meetings, allowed derogatory language against women to continue unchecked, and allowed a consultant to brag that he could have sex with a woman because “she works for me.”

Among the lawsuit’s allegations are these involving a corporate retreat that was allegedly headlined by Ablow:

P72’s duplicity regarding the development and advancement of female employees is further demonstrated by the events that took place at the women’s “leadership summit” held in October 2016 at Cohen’s home.

Female employees were forced to listen to advice from Keith Ablow (“Ablow”), a contributor on Fox News, who made repeated offensive remarks about women, including referring to Hilary Clinton as an “accomplished man’s wife.”

Ablow further advised the women who work at P72 to be “more emotional” and bring their personal lives to work.

After Ablow chastised Soledad O’Brien for allegedly interrupting him and not
listening, the summit chair effectively shut down the meeting.

Watchdog group Media Matters For America saw that language in the lawsuit as a chance to dredge up Ablow’s past on-air comments. The group referred to Ablow as a “bigot” and an “unethical pop psychologist” who fed “junk science and bigotry to gullible Fox viewers.” The group further questioned how someone with Ablow’s track record could possibly be considered qualified to speak at a so-called “women’s leadership forum.

As Media Matters puts it:

Though he’s now largely disappeared from Fox airwaves, some of Ablow’s apparent qualifications for speaking at a women’s leadership forum include past on-air treasures like regularly bullying transgender people, claiming same-sex marriage will lead to bestiality, delivering racist rants about former President Barack Obama and ebola, and criticizing German Jews for not having “more actively resisted” Nazi occupation.

The watchdog group gave a laundry list of Ablow’s alleged past on-air transgressions, which included claiming “young girls provoked harassment by wearing leggings to school,” writing that “every single man alive has been sexually harassed by being exposed to sexually suggestive clothing worn by women specifically to convey erotic messages in schools and at work,” wondering “if any actresses had ever victimized [Harvey] Weinstein by playing on his narcissism and need for sex” and “exacting from him incredibly valuable opportunities,” and blaming “Victoria’s Secret and women who shop there for creating more Harvey Weinsteins.” He also “called for men to have veto power over women’s abortions,” the group further noted.

Media Matters also emphasized that Bonner’s lawyers work for the same firm that handled harassment actions at 21st Century Fox. Though Ablow is no longer with the network as paid contributor, he still writes op-ed pieces for FoxNews.com, including this one from last month. Fox has repeatedly said that it has worked to rid its own workplace of harassment-related issues.

Point72 Complaint by LawNewz on Scribd

[Editor’s note:  We have updated this piece to reflect that Ablow is no longer a paid contributor with Fox News.]