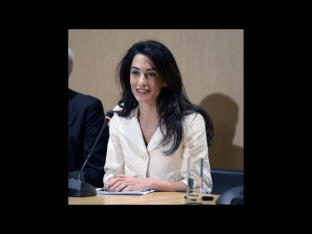 Human Rights lawyer Amal Clooney on Friday blasted the United Nations over its failure to take meaningful action in the nearly two years since ISIS began its reign of terror over the Yazidi community.

The Independent, a newspaper published in the United Kingdom, reported on Clooney’s speech, stating the speech served as an introduction to Nadia Murad, a woman captured by ISIS in 2014.  Murad’s mother and six brothers were killed almost immediately, while she was trafficked as a sex slave before ultimately escaping herself.  Murad now serves as ambassador for the Dignity of Survivors of Human Trafficking through the UN’s Drugs and Crime body, according to the report.

In her speech, Clooney cut right to the chase, saying, “I wish I could say I’m proud to be here but I am not.”

She then took dead aim at UN member states for failing to put aside their own self interests to punish ISIS.

“I am ashamed as a supporter of the United Nations that states are failing to prevent or even punish genocide because they find that their own interests get in the way,” Clooney said.

She continued to say how “ashamed” she is that so little is being down, despite knowing “exactly who the perpetrators are…. ISIS brags about its crimes online.”

Clooney then turned to Murad and offered her an apology.

“I am proud to know you Nadia, and I am sorry that we have failed you, Clooney said.  “I hope that your appointment today can be a turning point for all victims of sexual violence in human trafficking.”

The full text of the speech is available HERE.