‘The Court Need Look No Further’: Federal Prosecutors Use ‘QAnon Shaman’s’ News Interview Boast Against Him 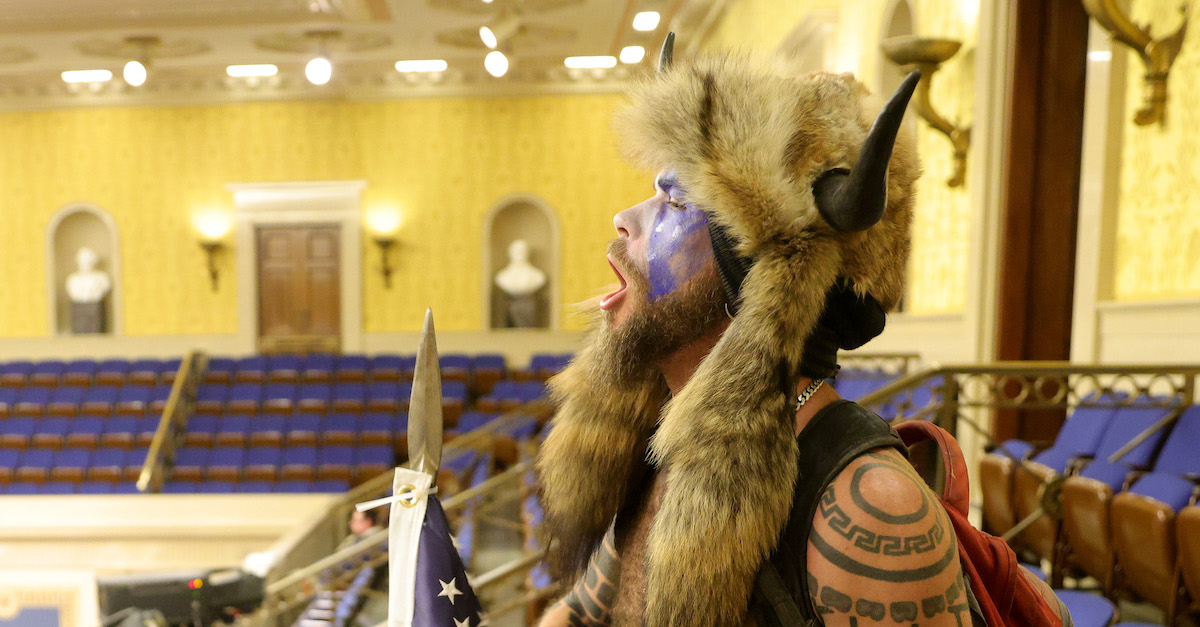 Federal prosecutors are using so-called “QAnon Shaman” Jacob Chansley’s own words against him in a court document which aims to keep Chansley behind bars pending trial.

Chansley filed an emergency motion to be released from jail in late February. In it, his attorney, Al Watkins, argued that Chansley was “immediately and fully forthcoming” with federal law enforcement officers and exhibited a “high degree of cooperation” while submitting to interviews without the presence of an attorney. The motion further argued that Chansley’s alleged weapon wasn’t really a “spear” — which is what the government had alleged. Rather, Chansley’s lawyer asserted that the alleged weapon was merely a flag pole with a decorative finial.

The characterization is legally important. If the government successfully asserts that the item qualifies as a “dangerous weapon,” one of the charges Chansley faces becomes a felony, rather than a misdemeanor.

The government began its response about the dangerousness of the alleged weapon — which the government invariably called a “blade” and a “spear” — by citing Chansley’s own words.

“The fact that we had a bunch of our traitors in office hunker down, put on their gas masks and retreat into their underground bunker, I consider that a win,” Chansley is quoted as saying to NBC News shortly after the Jan. 6 siege on the U.S. Capitol which sent lawmakers scurrying for cover.

The government said utterances like that are more legally relevant than Chansley’s subsequent pleas for leniency.

“The Court need look no further than the defendant’s own words during and after the riot to determine that he is a danger to the community,” prosecutors wrote. “Statements of guilt and remorse after the defendant’s subsequent incarceration are no match for the evidence the government has proffered about the defendant’s actions on January 6, 2021, many of which were caught on national media for the world to see.”

Prosecutors then attempted to debunk Chansley’s arguments surrounding his flagpole and its attached finial (citations omitted):

Despite defense’s argument to the contrary . . . the defendant was carrying a dangerous weapon when he stormed the U.S. Capitol and confronted Capitol Police officers. The bail reform statute’s basis for hold in a felony that involves a “dangerous weapon” under 18 U.S.C. § 3142(f)(1)(E) does not restrict that term to a firearm or destructive device. Indeed, several other defendants in cases involving the Capitol riot have been detained for possessing non-traditional weapons like an axe handle and a flag pole. As Chief Judge Howell noted in the Memorandum Opinion on the detention appeal in United States v. William Chrestman, “a defendant’s carrying or use during the riot of a dangerous weapon, whether a firearm, a large pipe, a wooden club, an axe handle, or other offensive-use implement, indicates at least some degree of preparation for the attack and an expectation that the need to engage in violence against law enforcement or, indeed, the Legislative branch, might arise.” Here, the defendant confronted members of Capitol Police with a blade several inches in length atop a pole which matched the defendant in height.

What followed was an image which showed Chansley with his flagpole. It is the same flagpole he’s seen holding in other images, such as this one: 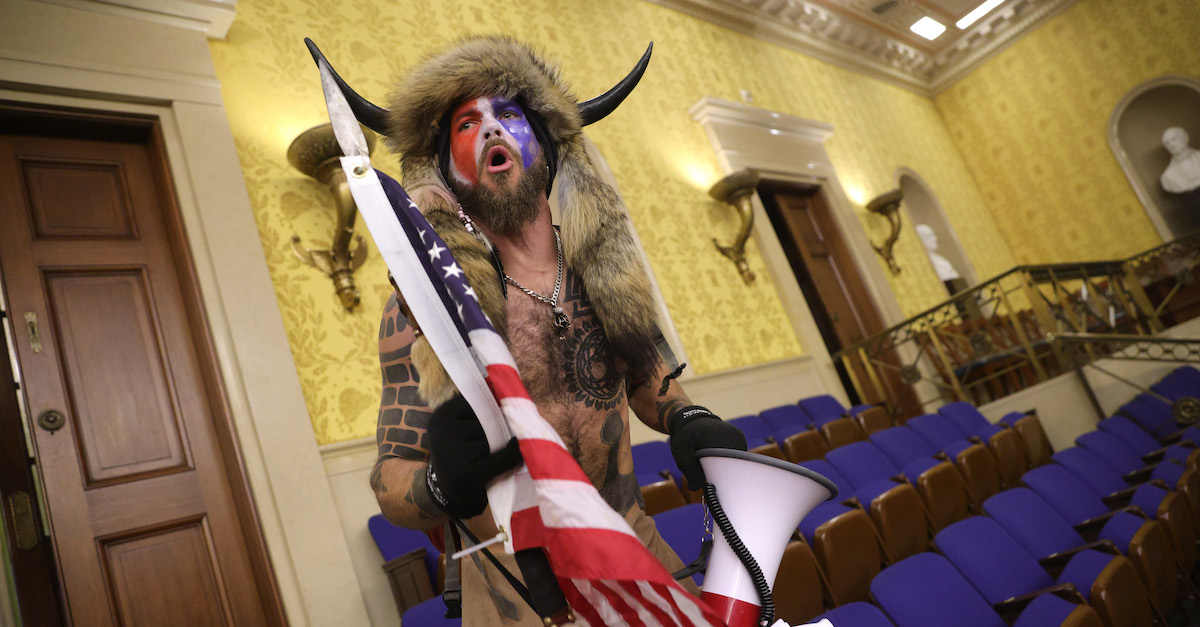 “The defendant subsequently took that weapon in to the gallery the United States Senate chamber, driving it into the ground while screaming obscenities at the top of his lungs,” prosecutors continued. “Not only were his actions terrifying, they were obstructing the normal functioning of the Government, as clearly no business could be conducted when a man with a spear shouting obscenities was in the Chamber. The argument that such a weapon is actually an honorific to his Shaman faith and to the United States flag, which was crudely zip-tied to the weapon, is a difficult pill to swallow, particularly when the defendant is dishonoring everything that flag represents by attempting to stop the peaceful transfer of power on which our Democracy is built.”

Prosecutors then tied the argument together by again referring to Chansley’s media interviews.

“Subsequent discussion with news outlets, like the quote to NBC News mentioned above, and statements to the FBI in the days further corroborate the meaning of these threats,” they said. “He explained again that he believed then-Vice President Mike Pence to be a traitor, and that many current and past political leaders were infiltrators.”

They continued to press that Chansley is a danger to others and cannot be released.

“Undeterred by the threat of potential prosecution, the defendant continued to push his dangerous rhetoric about the leaders of our nation,” the document continues. “Indeed, during his custodial interview, the defendant stated he hoped to return to Washington, D.C. for the inauguration, indicating willingness to continue his dangerous activities. He cannot be trusted now to suddenly change course.”

Watkins also cited Chansley’s belief that Trump called upon him to act, Chansley’s offer to testify against former president Donald Trump during Trump’s second impeachment trial, and subsequent statements of remorse as reasons why Chansley should be released. Prosecutors said Chansley cannot be allowed to “hide behind” Trump in an effort to evade responsibility for his own actions.

The federal statute cited by prosecutors, 18 U.S.C. § 3142(f)(1)(E), explains (in part) that detention hearings are required for “any felony that is not otherwise a crime of violence that involves . . . the possession or use of a firearm or destructive device (as those terms are defined in section 921), or any other dangerous weapon.” In other words, firearms, destructive devices, and dangerous weapons are not necessarily the same thing. Statutes are not generally interpreted as containing duplicative terms; every term is assumed to have been written in a statute to have a precise and distinct meaning. As the Supreme Court said in 1990, “absentminded duplication and omission are possible, but Congress is not presumed to draft its laws that way.”

A hearing to hash out these arguments is set for Thursday.