Prosecutors Claim Accused Capitol Rioter Gave an ‘Audiotaped, Mirandized Confession’ That He Assaulted Police. He Was Just Released from Jail. 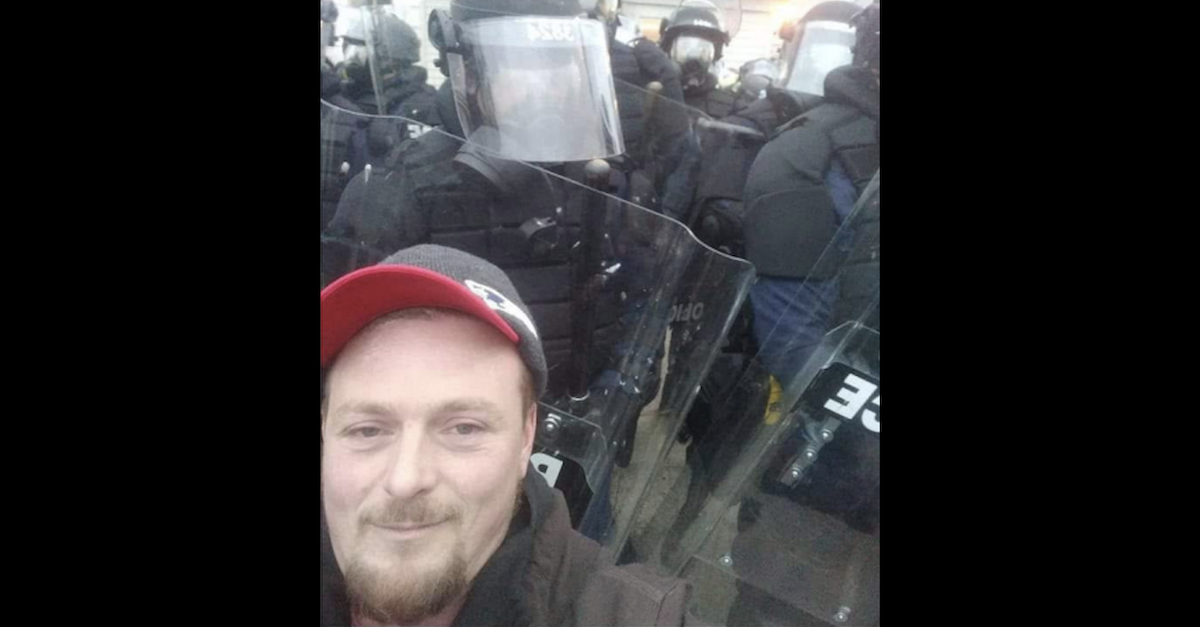 The FBI says it received two tips that Troy Sargent posted this photo in front of riot police on Facebook before deleting the post.

For two months, the FBI has been pursuing leads that began with two tips showing photographs of accused Capitol rioter Troy Sargent posing for a smiling selfie in front of heavily shielded Capitol police. Those resulted in six charges against him on Tuesday, including for assaulting officers.

At a hearing that afternoon, a prosecutor claimed Sargent confessed to assaulting police, and the government nevertheless agreed to release him with travel restrictions pending his transfer to Washington, D.C. within the next few days.

Five days after the Jan. 6th insurrection, the FBI received two similar submissions about a since-deleted Facebook photograph of a Massachusetts man smiling for a selfie in front of riot police at the U.S. Capitol. The officers, looking far more serious, held shields and visors and gas masks, their faces unable to be seen in the images.

“He posted this picture on facebook and has since deleted it,” the first tipster told authorities on Jan. 11th.

Unveiling the fruits of a nearly two-month long investigation on Tuesday, the FBI identified the man as Sargent, the same Massachusetts resident both tipsters named.

Putting a new spin on his mirthful mugshot in front of riot police, Sargent now stands accused of assaulting federal law enforcement—along with five other crimes. Assistant U.S. Attorney Steven H. Breslow said at a hearing today that Sargent gave an an “audiotaped, Mirandized confession” on the lead charge and that all but one of those charges are felonies, with the statutory maximum of the assault count being a possible eight-year sentence.

With the government’s agreement, Magistrate Judge Katherine Robertson released Sergeant from pre-trial lockup to home confinement on Tuesday, pending his transfer to and initial appearance in a federal court in Washington, D.C.

“Don’t attend or organize any public demonstrations, rallies or protests” without court-approved authorization, the judge instructed.

The FBI says that the public’s leads kept pouring in with new photographs and videos after the initial identification.

On Jan. 13, the FBI reported receiving a video from a tipster who did not believe Sargent entered the Capitol.

Four days after that, another allegedly sent in Sargent’s enthusiastic—and also subsequently deleted—post boasting about his confirmation of his hotel booking at the Hyatt Place in Washington, D.C. on the day of the siege.

“I ain’t missing this,” Sargent wrote next to the receipt, according to court papers.

“In that part of the video in which the following two screen shots were taken, Sargent moves forward to the front of the line, appears to throw a punch with his right hand at a police officer, inadvertently strikes another member of the crowd, and then retreats back into the crowd,” FBI agent Tony LaCasse wrote. “Sargent appears to be holding a cell phone in his left hand.”

Embedding screenshots from that bodycam footage, authorities narrate what they claim the footage shows. 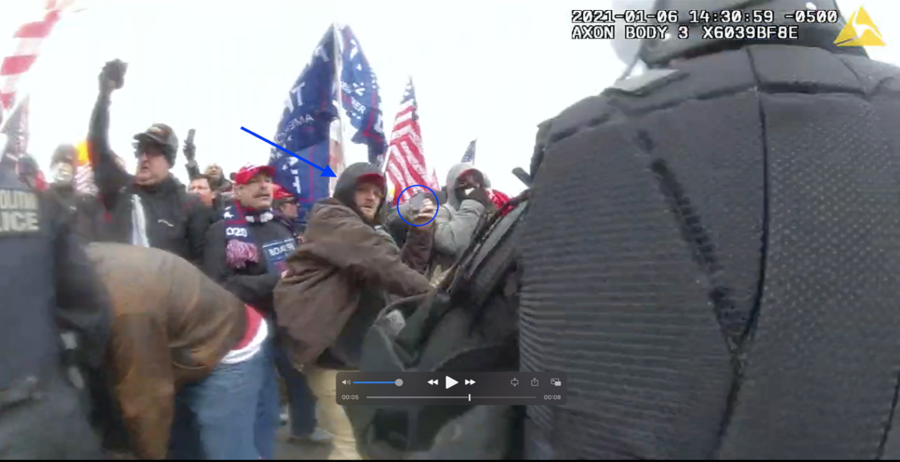 “Sargent approaches the front of the crowd of rioters, confronts the line of police officers attempting to hold the crowd back, and physically engages with one of the officers with his right hand while holding what appears to be a cell phone in his left hand,” the FBI’s affidavit states. “Sargent appears to make physical contact with one or more law-enforcement officers.”

Sergent is represented by attorney Joshua Hanye, from the Federal Defenders office in Boston.

Judge Robertson said that Sergeant will have his initial appearance in Washington, D.C. this week, and she questioned the prosecutor about the logistics of Pre-Trial Service’s to look over him in two days. She asked whether it would be necessary to monitor him closely, considering he has not been accused of attacking anyone since Jan. 6th.

“We’re not aware of any further incident, either,” Breslow said, adding that the incident on the siege was serious enough to watch him closely.

Referring to the alleged confession, prosecutors claim that Sargent acknowledged that he was the person in the video seen lunging at officers and throwing a part.

Prosecutors have estimated that roughly 140 assaults on U.S. Capitol Police and Metropolitan Police Department officers took place on the day of the siege.

Read the FBI’s statement of facts below:

[Screenshots from the FBI’s affidavit]