InfoWars Host Charged with Federal Crimes After Claiming He’d ‘Save the Republic’ from ‘Fraudulent Election’ During U.S. Capitol Siege 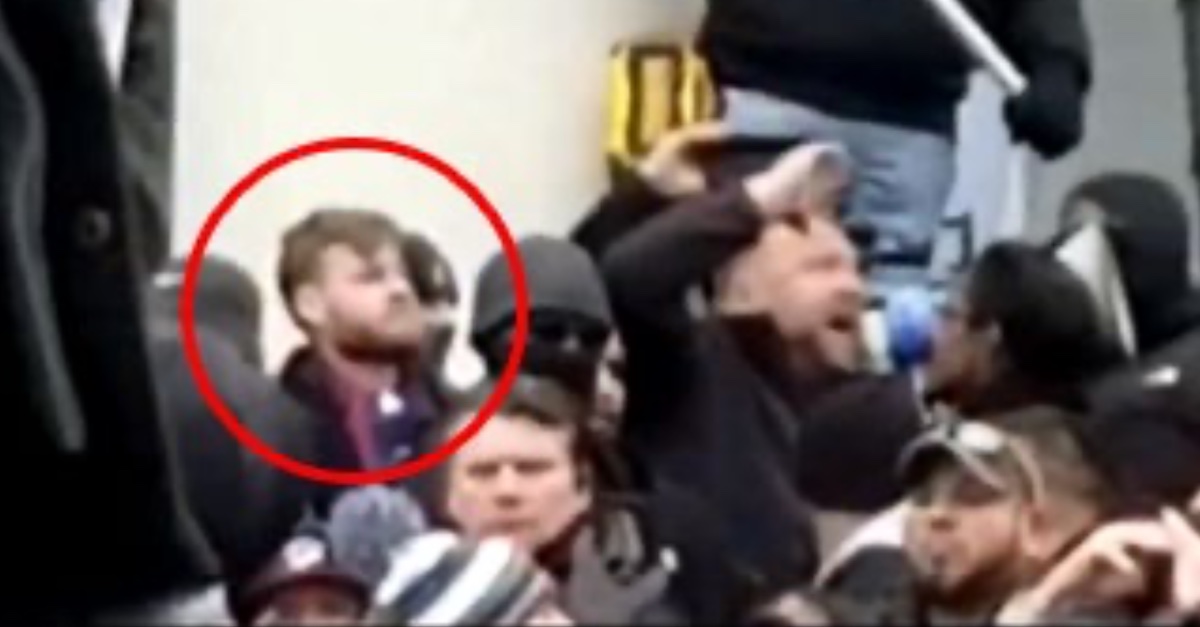 InfoWars host Owen Shroyer appears in a screengrab taken from video provided by a tipster to the FBI.

An InfoWars host and correspondent was charged Thursday in connection with the Jan. 6th siege on the U.S. Capitol Complex.

According to federal court papers, Owen Shroyer is charged with knowingly entering or remaining in any restricted building or grounds without lawful authority and violent entry and disorderly conduct on Capitol grounds.

The January 6, 2021 siege was not the first time Shroyer engaged in alleged illegal conduct around the Capitol. On December 9, 2019, he disrupted a House Judiciary Committee hearing by “jump[ing] up from his seat and shout[ing] in a loud manner . . . caus[ing] the Chairman to hit the gavel and request that order be restored,” the court documents noted.

Officers took Shroyer from the room and arrested him.  He entered into a Community Service Deferred Prosecution Agreement which required him not to parade, demonstrate, or picket within the Capitol buildings. The deal also required him not to engage in other threatening or abusive conduct around the facility.

According to federal court papers, that agreement remained in effect on January 6, 2021. And Shroyer allegedly “had not completed, nor reported the completion of, any of the 32 hours of community service as required” as of the date of the Jan. 6 siege. 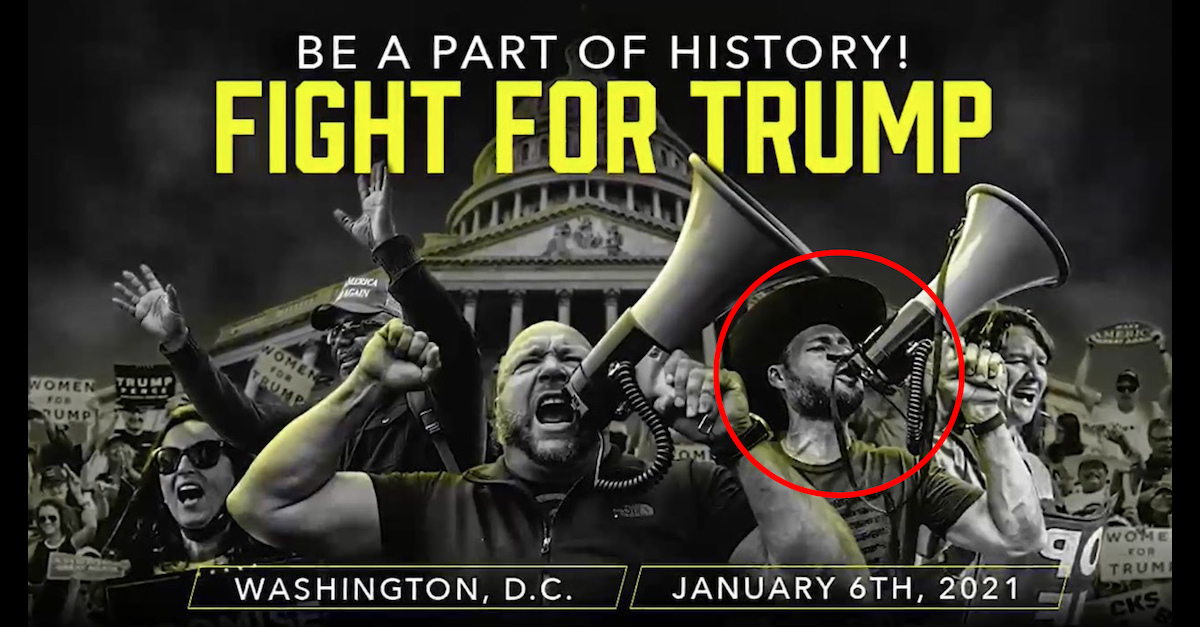 An InfoWars promotional image containing the visage of Owen Shroyer (circled) was captured by the FBI and embedded within federal court charging documents.

A Statement of Facts filed August 18, 2021 went through great lengths to describe Shroyer’s broadcasts leading up to the Jan. 6 siege:

SHROYER traveled to Washington, D.C. in January 2021, and in advance of January 6, 2021, spoke of stopping the certification of the Electoral College vote. In a video posted to the Infowars website on January 5, 2021, SHROYER gave an address in Freedom Plaza in Washington D.C., during which he stated: “Americans are ready to fight. We’re not exactly sure what that’s going to look like perhaps in a couple of weeks if we can’t stop this certification of the fraudulent election . . . we are the new revolution! We are going to restore and we are going to save the republic!”

In another video posted to the Infowars website on January 5, 2021, SHROYER called into an Infowars live broadcast and said: “what I’m afraid of is if we do not get this false certification of Biden stopped this week. I’m afraid of what this means for the rest of the month . . . Everybody knows election was stolen . . . are we just going to sit here and become activists for 4 years or are going to actually do something about this . . . whatever that cause or course of cause may be?”

In addition, SHROYER was featured in promotional material circulated by Infowars. One promotional video urged listeners to “come to the big D.C. marches on the 5th and 6th of January, I’ll see you there.” The video ended with an edited graphic of SHROYER and others in front of the Capitol building. 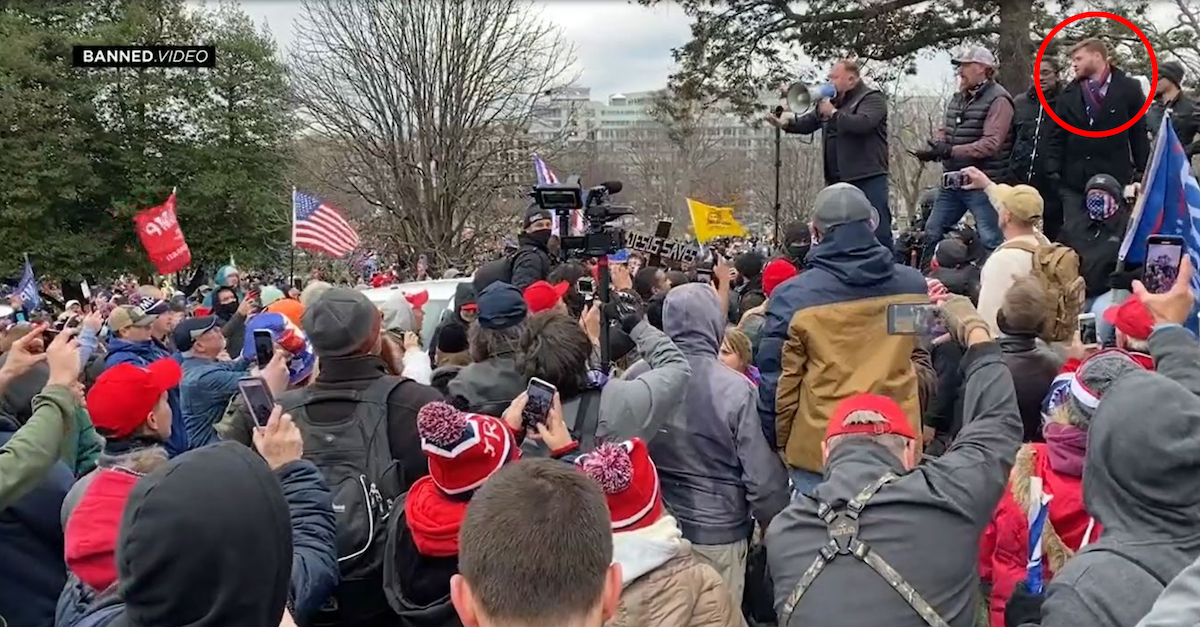 The FBI says this screengrab taken from an InfoWars video shows Owen Shroyer (circled) near the U.S. Capitol on January 6, 2021.

The FBI agent who reviewed the material continued by explaining Shroyer’s alleged actions:

According to video footage I have reviewed, on January 6, 2021, SHROYER marched to the U.S. Capitol from the Ellipse shortly before the U.S. Capitol was breached. One video depicted SHROYER, marching with other individuals, leading a crowd of people in a “1776!” chant as the host of the Infowars show on which the video was streamed stated, “Alex Jones at this moment is leading the march toward the Capitol building.” In the same video, SHROYER can be heard telling the crowd, “today we march for the Capitol because on this historic January 6, 2021, we have to let our Congressmen and women know, and we have to let Mike Pence know, they stole the election, we know they stole it, and we aren’t going to accept it!”

Images embedded within the federal court documents then alleged that Shoyer “entered the restricted area.” Alex Jones is standing in front of Shoyer in some of the images.

Jones’s name is mentioned once in the charging document.

Some of the images are taken from InfoWars videos; some were retrieved from videos provided by tipsters. 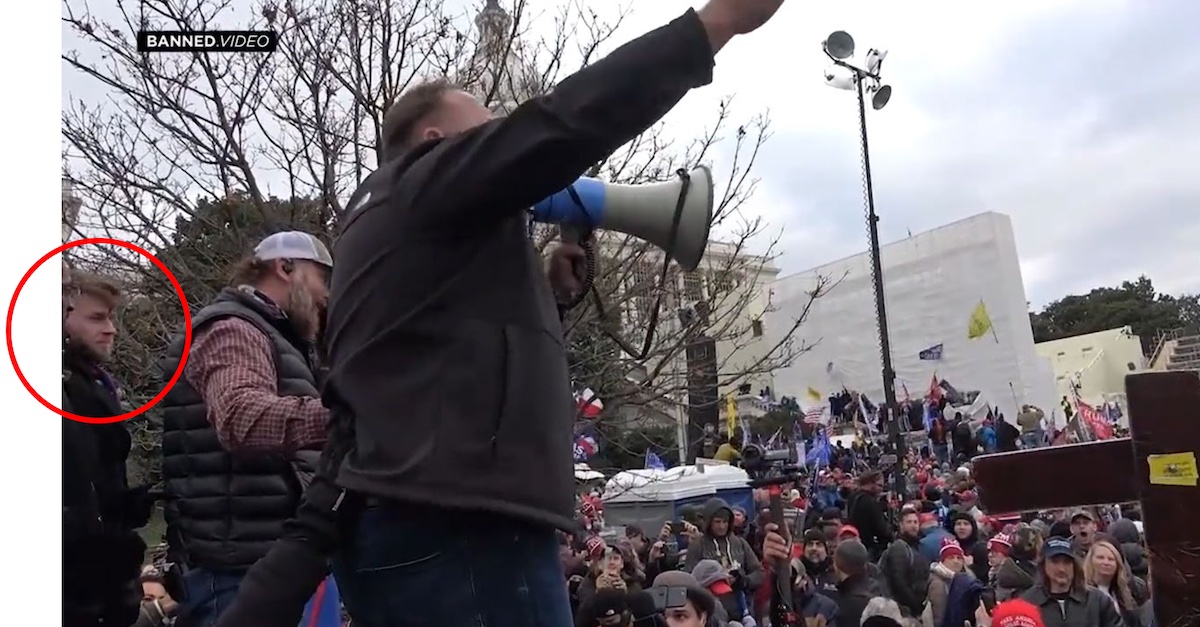 The FBI says this screengrab taken from an InfoWars video shows Owen Shroyer (circled) near the U.S. Capitol on January 6, 2021.

The FBI statement of facts goes on as follows:

SHROYER is publicly known, and appears and identifies himself in numerous videos posted to Infowars and other sites. I am familiar with SHROYER’s appearance in such videos and have identified SHROYER in the above-referenced videos, and other videos and images, depicting SHROYER in the restricted area of the U.S. Capitol on January 6, 2021. In addition, SHROYER appears to have called into an Infowars broadcast live on January 6, from the Capitol grounds. During the call, SHROYER stated that “we got to the Trump rally at about 8:00 a.m.” and then around 2:00 p.m. “marched to the Capitol.” SHROYER further stated that he was on “one side of the Capitol, so we can’t see both sides, but on this side alone there’s probably about 100,000 people. They’ve taken the Capitol grounds, they’ve surrounded the building itself, they’re on the actual building structure. . . . We literally own these streets right now.”

Shroyer is a central figure in the InfoWars world. A June 2017 appearance on the titular program featured the defendant claiming that Sandy Hook father Neil Heslin could not have held his dead son in his arms after the mass shooting. That segment was integral to a Texas court ruling ordering Jones and the program to pay out $100,000 in legal fees.

Shroyer has also made a name for himself as an in-person provocateur. In 2016, he attempted to goad former Obama administration hire and eventual CNN analyst Van Jones into a debate on race relations. In 2019, as mentioned earlier in this story, Shroyer was kicked out of the U.S. Capitol during a House Judiciary Committee hearing on then-President Donald Trump’s impeachment. Later, in 2020, back home in Austin, Texas, Shroyer and Jones co-hosted an anti-lockdown protest that called for the head of Dr. Anthony Fauci.

Read the federal court papers below: