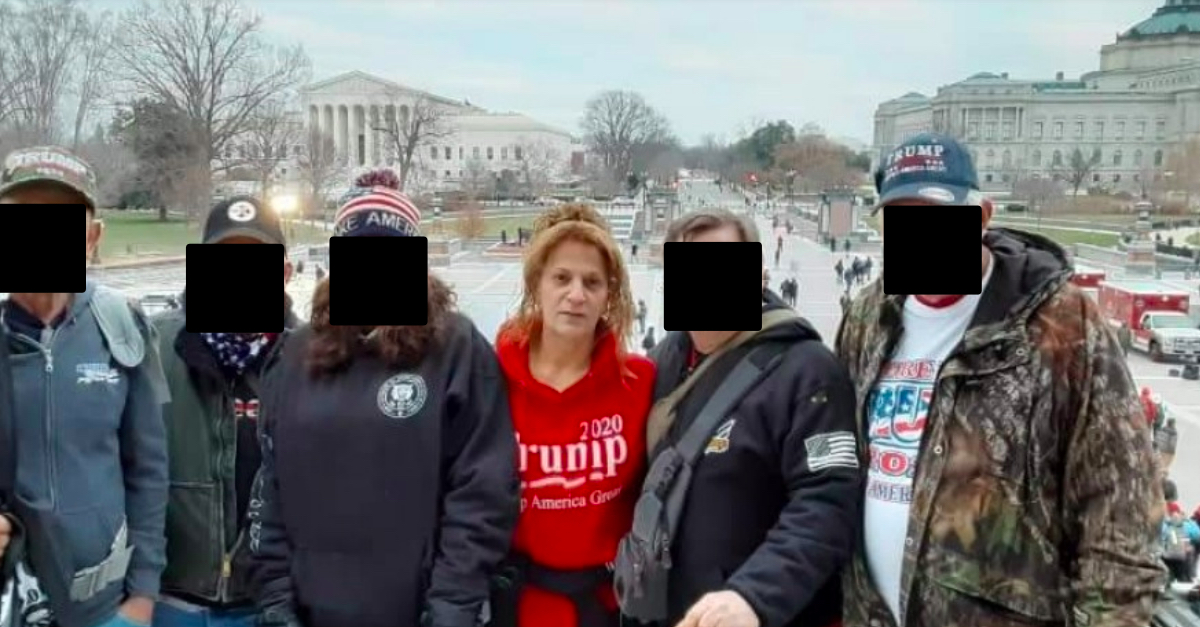 Federal authorities on Monday arrested a Pennsylvania woman who recorded video of a female New York Times photojournalist being assaulted and robbed by several men inside the U.S. Capitol during the Jan. 6 siege, the FBI said.  The woman is accused of calling the photographer a “traitor” and saying she should be maced, the FBI added.

According to charging documents unsealed Monday in the U.S. District Court for the District of Columbia, Sandy Pomeroy Weyer was one of the many supporters of Donald Trump who participated in the Jan. 6 breach based on the former president’s false claims about the 2020 election being “stolen” by Democrats. Alleged photos from that day show Weyer wearing a red “Trump 2020” sweatshirt during the siege.

Per the affidavit submitted in support of Weyer’s arrest, the Mechanicsburg native posted a plethora of self-incriminating evidence of her conduct to her social media accounts, a common factor among many of the more than 500 Capitol siege defendants.

For example, on the morning of Jan. 6, Weyer allegedly posted a photograph of herself and several other individuals inside of a vehicle saying they were “Patriots on the way to Washington, D.C.” The next day, she posted a photograph of herself and multiple individuals who she said were accompanying her to D.C. standing outside the U.S. Capitol after the mob had already broken into the building.

The FBI also said that Weyer engaged in multiple public conversations online claiming she broke into the Capitol and had no regrets about her actions.

“Hope u guys had nothing to do with the breach they were all hoodlums And traitors,” a Facebook user wrote under one of the photos Weyer allegedly uploaded from the Capitol.

“I seen no riots. I saw Patriots sick of being lied to and the election being stolen from us! I saw no violence from the Patriots!” Weyer responded.

“We may have broken through the barricades and the doors to the Capitol . . . but I know that my group was not violent or rioting and I didn’t see any other Patriots rioting or being violent,” she’s accused of saying in another exchange.

The FBI further alleged that Weyer filmed and taunted a photographer with the New York Times as the photographer’s camera was forcibly taken by four men on the stairs near the East Rotunda. The affidavit described the incident as follows:

The bureau also claims that after Facebook took down her videos for violating their terms of service, Weyer publicly inquired about how she could get them back, posting on the site that she was “right up front” during the siege.

She is charged with knowingly entering a restricted building, disrupting the orderly conduct of government business, disorderly conduct on Capitol grounds, and impeding Congress.