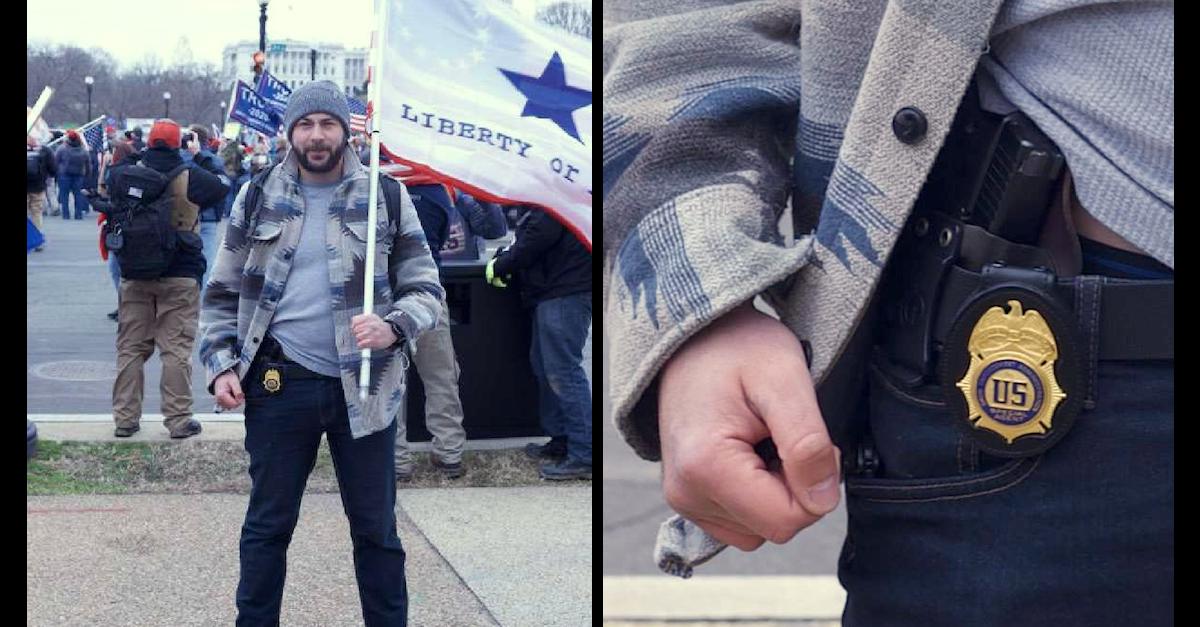 An agent with the U.S. Drug Enforcement Administration played an active role in the Jan. 6th siege on the U.S. Capitol, the Department of Justice said in federal court papers on Tuesday.

According to the documents, Mark Sami Ibrahim, of Orange County, Calif., repeatedly displayed his government-issued firearm and his DEA badge while storming the capitol — and even asked a friend to photograph him in the process. But the feds were careful to tiptoe around his employment status with the DEA as of the time he’s accused of committing several federal crimes in Washington, D.C.:

Federal agents say various photos of Ibrahim were shared in “a WhatsApp group chat with at least five other law enforcement officers” on Jan. 6th. Among the images was a photo of the defendant “standing next to one of the bicycle-style barricades that had been pulled apart by the crowd several minutes earlier.” Here’s the image referenced: 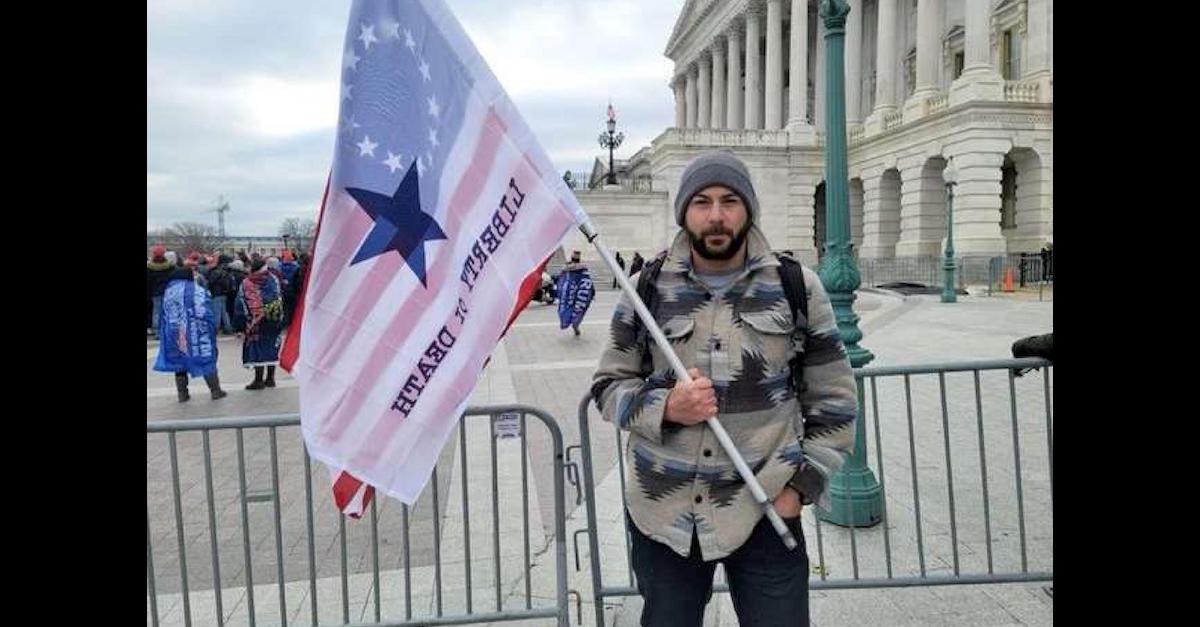 As the photos indicate, the agent-turned-defendant carried a flag emblazoned with the phrase “liberty or death.”  The feds say Ibrahim traveled from California with a relative to attend the gathering of documented pro-Trump supporters who ultimately stormed the building.

Ibrahim is accused of posing with his badge and gun not once —  but twice. 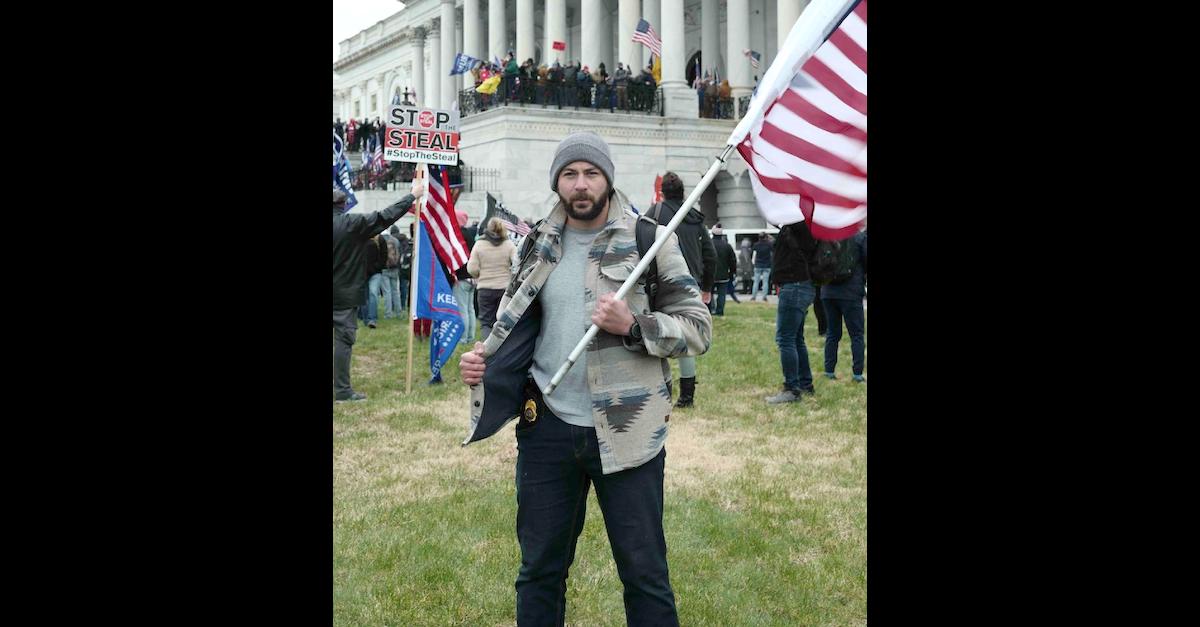 The image(s) being shared to other law enforcement officers alarmed some of those present on the group text.

“Question Mark, you are carrying your duty weapon and your badge/creds?” one of the officers asked. “I need to know this mark.”

The court records say Ibrahim remained on U.S. Capitol grounds from between the 12:30 to 1:00 p.m. window and remained through much of the afternoon. An unnamed individual described as a friend — perhaps the same friend who photographed Ibrahim’s poses with his gun and badge — is said to have recorded video of a mortally wounded Ashli Babbitt being taken to an ambulance at about 3:01 p.m. on the east side of the Capitol.

Babbitt was “transported within steps” of the defendant, the court documents say, and he “subsequently posted that video to the WhatsApp group chat” with other law enforcement officers. 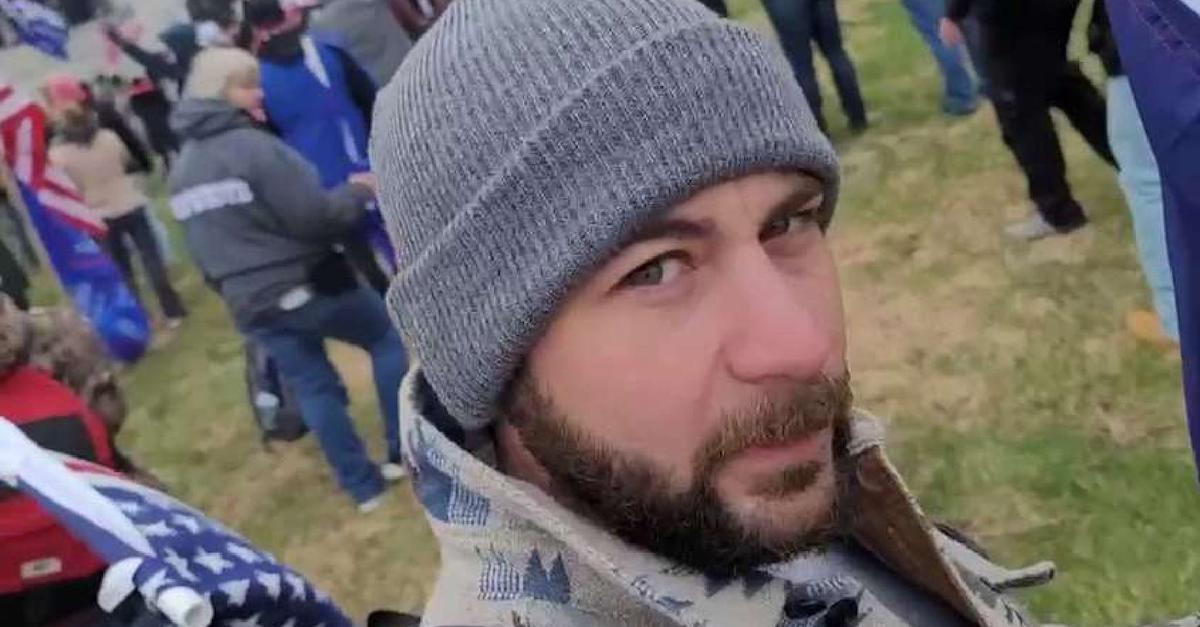 The feds say Ibrahim then climbed atop a statute called the Peace Monument and delivered with prosecutors referred to as a video “monologue.” A transcript of precisely what he said is not included in the available court documents. After delivering his speech, Ibrahim is accused of posing for additional photos with his DEA badge and service weapon.

According to court papers, Ibrahim spoke with federal investigators on March 15th with his attorney present. After the investigating officers says they warned him not to lie about what happened on Jan. 6th, Ibrahim admitted being present but denied some of what the photos show.

“I had my creds,” the defendant is alleged to have said in the recorded interview. “I had my firearm, and my badge on me . . . But never exposed . . . Not that I know of.”

Eventually, Ibrahim claimed that the friend who photographed and recorded the event was there to document what happened for the FBI.

The investigating officers — listed in federal court records as working through the Department of Justice’s Office of the Inspector General — then rubbished that claim by speaking to Ibrahim’s friend. Again, from the court papers:

Your affiant also interviewed IBRAHIM’s friend. According to the friend, IBRAHIM crafted this story about how his friend was at the Capitol to assist the FBI and that IBRAHIM was there helping him. IBRAHIM’s friend told your affiant that he was not there in any formal capacity for the FBI and that the FBI was not giving him directions or marching orders. He said that IBRAHIM crafted this story in an effort to “cover his ass.” According to IBRAHIM’s friend, IBRAHIM went to the rally in order to promote himself—IBRAHIM had been thinking about his next move after leaving the DEA and wanted the protests to be his stage for launching a “Liberty Tavern” political podcast and cigar brand.

The case against Ibrahim is unique given the DOJ OIG’s involvement, which is itself almost certainly a result of the defendant’s employment. The FBI is directly investigating almost all of the hundreds of capitol siege defendants.

Ibrahim is accused of several federal crimes: (1) making false statements; (2) entering and remaining in a restricted building or grounds with a firearm; (3) stepping or climbing on a statue; and (4) another firearm offense involving capitol grounds and building security.

[all images via federal court documents on file in U.S. District Court for the District of Columbia]