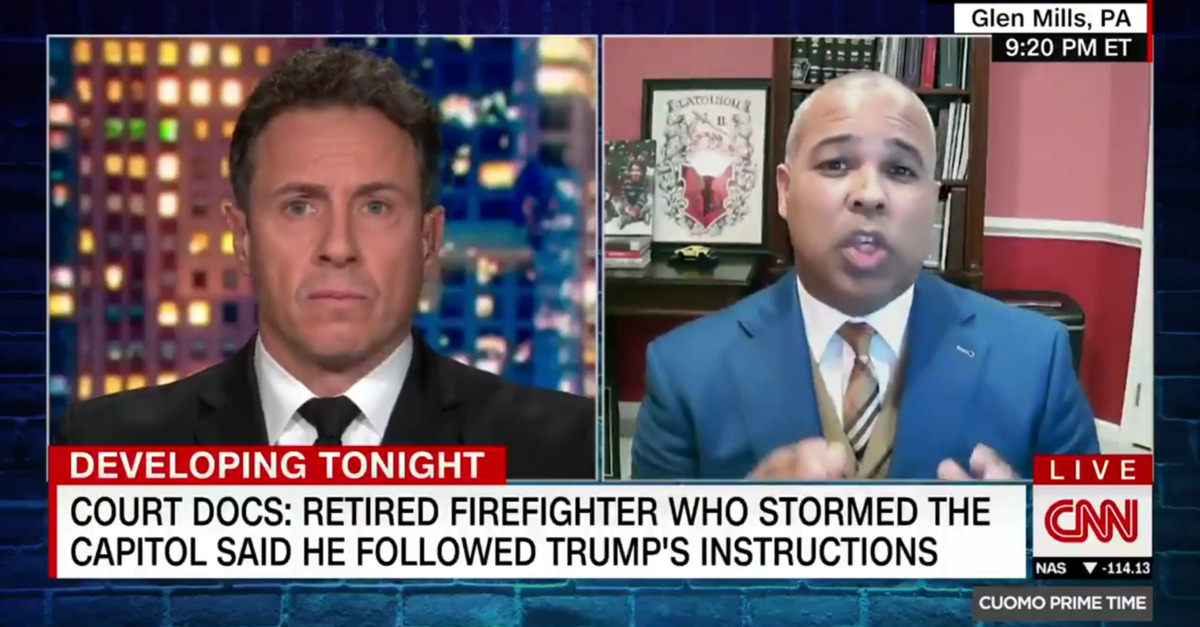 Robert Sanford, the former firefighter charged with assaulting three Capitol Police officers by hitting them in the head with a fire extinguisher during the U.S. Capitol siege on January 6, has obtained legal counsel. His attorney, Enrique Latoison, obtained some ill-advised notoriety of his own on Friday evening.

.@ChrisCuomo’s reply: “Give me a break. I hit you in the head with an empty fire extinguisher and you’re going to feel good about it?!” pic.twitter.com/A1wMdErTRA

“It’s very important to separate Mr. Sanford from some of the other things that were shown,” Latoison said during an appearance on CNN’s Cuomo Prime Time. “He was not walking around with a six-foot spear, he was not, you know, physically attacking Capitol officers–”

Eponymous host Chris Cuomo then interjected to note the specific allegations: “He hit ’em in the head with a fire extinguisher.”

To which the attorney visibly swallows before replying:

Well, the first thing I’m gonna say about that is: this fire extinguisher was empty. You can see it bounces almost toy-like. There was debris and there was stuff being thrown everywhere.

“Enrique, come on, give me a break,” Cuomo responds after a bit of cross-talk. “I hit you in the head with an empty fire extinguisher. You’re going to feel good about it?”

Reaction to Latoison’s highly public attempt at lawyering was less than kind.

“Lawyer advice: In a [high profile] case don’t go on TV [because] you were invited to appear on TV,” advised renowned trial attorney and Law&Crime Network host Linda Kenney Baden via Twitter. “Getting your name on camera may do you good but conflicts with your client’s best interest. Say something helpful or not at all.”

Sanford was arrested by the FBI on Thursday and charged with four federal crimes. Three of those charges concerns his alleged use of the “empty” fire extinguisher as a weapon to attack three Capitol Police officers. The argument that the extinguisher was allegedly empty will bear little on one of the crimes charged. Sanford is accused of offenses which require federal prosecutors to prove beyond a reasonable doubt that he “use[d] or carrie[d] a deadly or dangerous weapon or firearm.” Arguably, an empty metal fire extinguisher can be dangerous or deadly by its sheer weight.

To date, only one of the officers Sanford allegedly attacked has been named.

“Officer William Young of the [U.S. Capitol Police] reports that he and twenty officers and two sergeants were deployed to the Lower West Terrace of the U.S. Capitol at some point after [12 p.m.] on January 6, 2021,” court papers note. “While Officer Young was on duty and attempting to control the crowd, he felt a hard strike to the back of his helmet. When he turned to see where the blow had originated, Officer Young saw a fire extinguisher on the ground but could not determine who had struck him. Officer Young was subsequently evaluated at a hospital and cleared to return to duty.”

Prosecutors say they were able to identify Sanford based on a combination of video footage and via the help of a tipster who has known the defendant “for many years.”

Latoison quickly mounted a fulsome full-press courting effort on behalf of his client.

A similar statement was given to the Philadelphia Inquirer.

“He obviously was caught up in a bad moment,” Latoison told that local daily newspaper. “That maybe minute of his life that he’s been accused of does not outweigh 55 years of a clean track record he’s been displaying.”

Prosecutors, however, maintain that Sanford owned at least one t-shirt affiliated with the far-right Proud Boys street gang, a group whose members were in full force at the U.S. Capitol Siege and who allegedly plotted to kill Vice President Mike Pence and House Majority Leader Rep. Nancy Pelosi (D-Calif.).