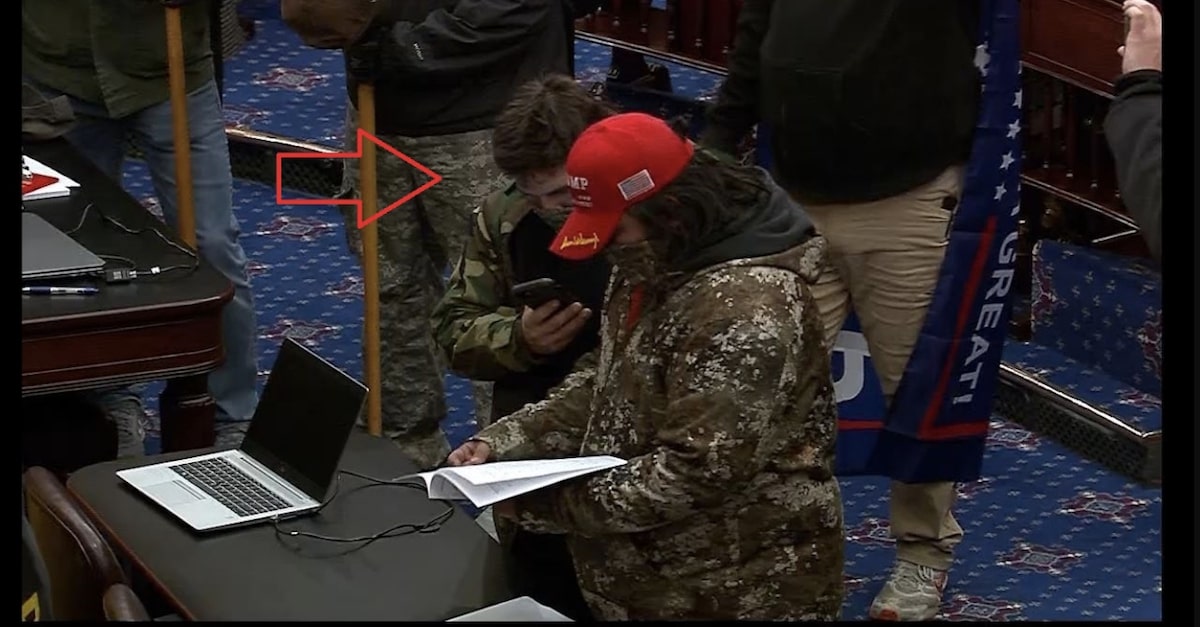 On Jan. 6, 2021, two of the men who stormed the U.S. Capitol were spotted on the Senate floor rifling through documents left behind by fleeing lawmakers. One snapped pictures of its pages from his smartphone.

Following a federal judge’s verdict in a bench trial on Wednesday, they’re felons — with several misdemeanor convictions to boot.

Arrested months apart more than a year ago, the two men, Luke Bender and Landon Mitchell, have Bender’s TikTok account to thank in part for their identification by federal investigators. The FBI observed a post of the duo standing next to each other holding flags outside the Capitol on Jan. 6.

The top count against them carries up to a 20-year maximum prison term, though most Jan. 6-related sentences for this offense to date have been much lower.

Their sentencing date has been scheduled for March 3, 2023.

Bender and Mitchell agreed before their trial that they entered the Capitol grounds illegally on Jan. 6, 2021, climbing scaffolding that had been erected for the inauguration.

The duo spent just less than a half hour inside the Capitol building after entering through the Upper West Terrace Door around 2:45 p.m. Eastern Time. From there, they eventually found their way into the Senate chamber at around 3:04 p.m. Eastern Time, passing through the Rotunda, the East Front Corridor, the Ohio Clock Corridor.

U.S. lawmakers had fled the chamber less than an hour earlier, as both the Senate and House were called into recess around 2:20 p.m.

During the handful of minutes that Bender and Mitchell spent inside the chambers, the sifted through documents sitting on the tables and took selfies from the Senate floor.

Each posed for pictures at the Senate dais, including a shot in which Bender stood next to Jacob “QAnon Shaman” Chansley, a tattooed, shirtless rioter sporting a coyote-fur Viking hat, red-white-and-blue face paint and a U.S. flag on a spear-shaped pole.

Chansley ultimately received a more than three-year sentence, with Senior U.S. District Judge Royce C. Lamberth remarking that the self-styled “shaman” had made himself the “very image of the riot.”

U.S. Capitol Police officers directed the rioters to leave the Chamber at around 3:08 p.m., and Bender and Mitchell left the building some two minutes after that order.

For days to come, the two men would boast of their antics on social media, in posts that would later be used against them.

On Facebook, Mitchell posted a meme of burning skull that he dedicated to his fellow rioters. 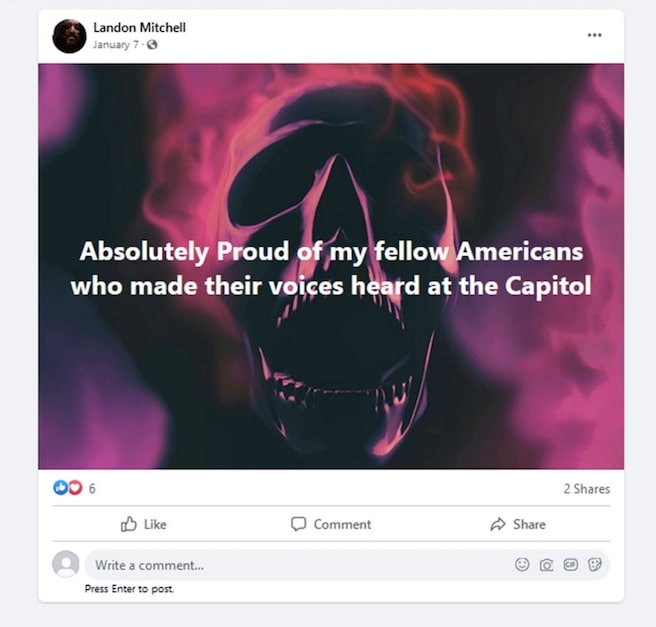 “Absolutely Proud of my fellow Americans who made their voices heard at the Capitol,” Mitchell wrote in a message reposted by Bender.

Some 10 days later, Mitchell assured his friend that he would avoid arrest for his conduct on Jan. 6, describing himself as “invincible” and “not too worried” because he “was masked up the whole time,” according to the FBI.