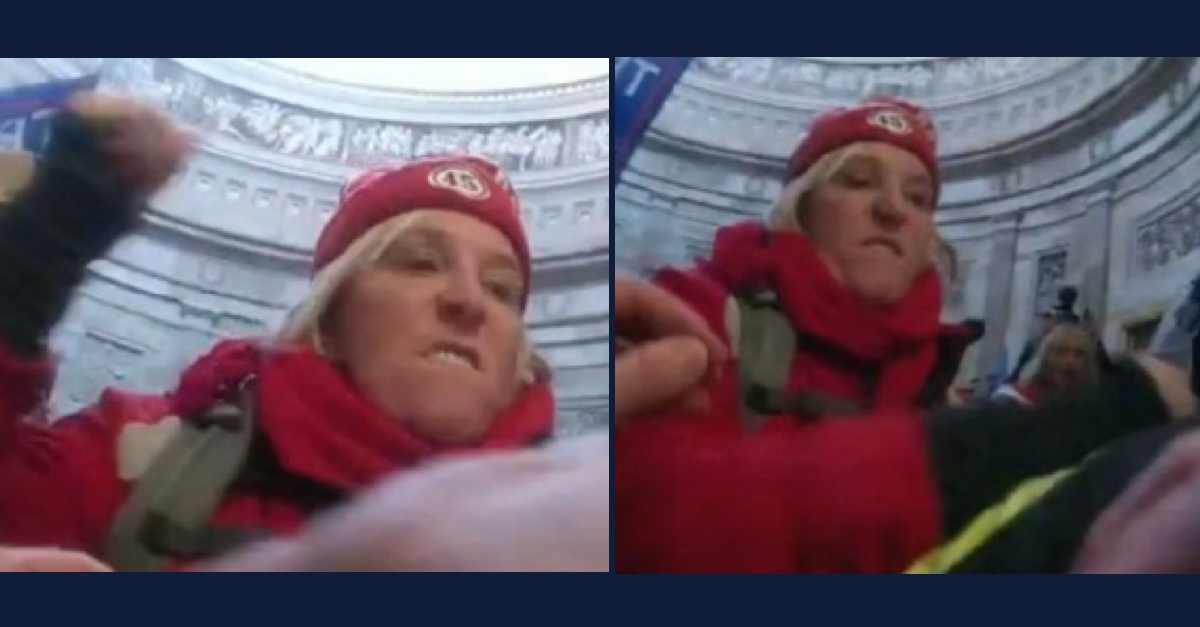 Nearly two years after the attack on the U.S. Capitol, a Massachusetts doctor who has been practicing for almost four decades has been arrested for punching a police officer in an alleged assault caught on tape.

Jacquelyn Starer, 68, of Ashland, was arrested on felony charges Tuesday, the Justice Department announced. She is accused of joining the mob of Donald Trump supporters who invaded the Capitol building as Congress was certifying Joe Biden‘s 2020 electoral win, facing off against police in the Capitol Rotunda, and punching a police officer. Starer joins nearly 300 others accused of assaulting law enforcement at the Capitol, and her arrest falls one day after the Jan. 6th Committee criminally referred Trump for allegedly inciting that “insurrection.”

According to the FBI’s affidavit, Starer drove to Washington from Massachusetts and was seen at Trump’s Jan. 6 so-called “Stop the Steal” rally, where the then-president repeated falsehoods about his 2020 electoral loss and urged his supporters to march to the Capitol building.

Starer, wearing a red Trump hat and a red jacket, followed those instructions, and allegedly entered the East Rotunda Doors at 2:51 p.m., more than 30 minutes after the initial breach of the building.

“Officer M.B. stated that a blonde woman wearing a red jacket and hat punched her in the left side of her head,” the Statement of Facts says. “According to Officer M.G., her Sergeant pulled her back to check on her, Officer M.B. told the Sergeant she had been punched by the woman, and the Sergeant told her to return to the line.”

“Officer M.B. stated that the blonde woman came at her again, and Officer M.B. struck the woman in response,” the affidavit says.

After that, the crowd apparently became more agitated, and a “physical altercation between rioters and officers ensued as the officers attempted to restrict the rioters from passing through the archway entrance to the area behind them,” the affidavit says.

Starer was reportedly “affected by the chemical irritant that was deployed during the altercation.” Security footage and publicly-available photographs appear to show Starer leaving the building at around 3:06 p.m. and receiving “first aid assistance to her eyes and face.”

The doctor has been charged with two felonies: civil disorder and assaulting, resisting, or impeding certain officers. She has also been charged with four trespassing and disorderly conduct misdemeanors. The civil disorder charge carries a statutory maximum sentence of five years in prison, and the assault charge has a potential eight years. The misdemeanors carry a combined potential three years behind bars.

Starer has been on the FBI’s radar since at least Jan. 11, 2021, when, according to the affidavit, a tipster submitted an online tip regarding Starer.

“According to Tipster-1, prior to Jan. 6, 2021, STARER bragged to a mutual acquaintance that she ‘was prepared’ for it, with a mesh knife-proof shirt and bottles of pepper spray,” the affidavit says.

The affidavit notes that Starer had planned to spend a few days in Washington, evidenced by her reservations from Jan. 5 to Jan. 7 at a hotel near the Capitol.

Massachusetts Board of Registration in Medicine records show that Starer, who is apparently enrolled as a Medicare provider, specializes in addiction medicine and obstetrics and gynecology. She has been licensed to practice medicine in the state since July 1983 and records do not indicate any history of disciplinary action.

She had been linked to Brigham and Women’s Faulkner hospital, but representatives have confirmed that she is no longer an employee there.

“Per hospital policy, the only information we are able to share is employment status,” a spokesperson told Law&Crime in an emailed statement. “This individual was a per diem employee who is no longer active at our organization.”