Maryland Man Who Was ‘Front and Center’ Attacking Police on Jan. 6 Gets Years Behind Bars 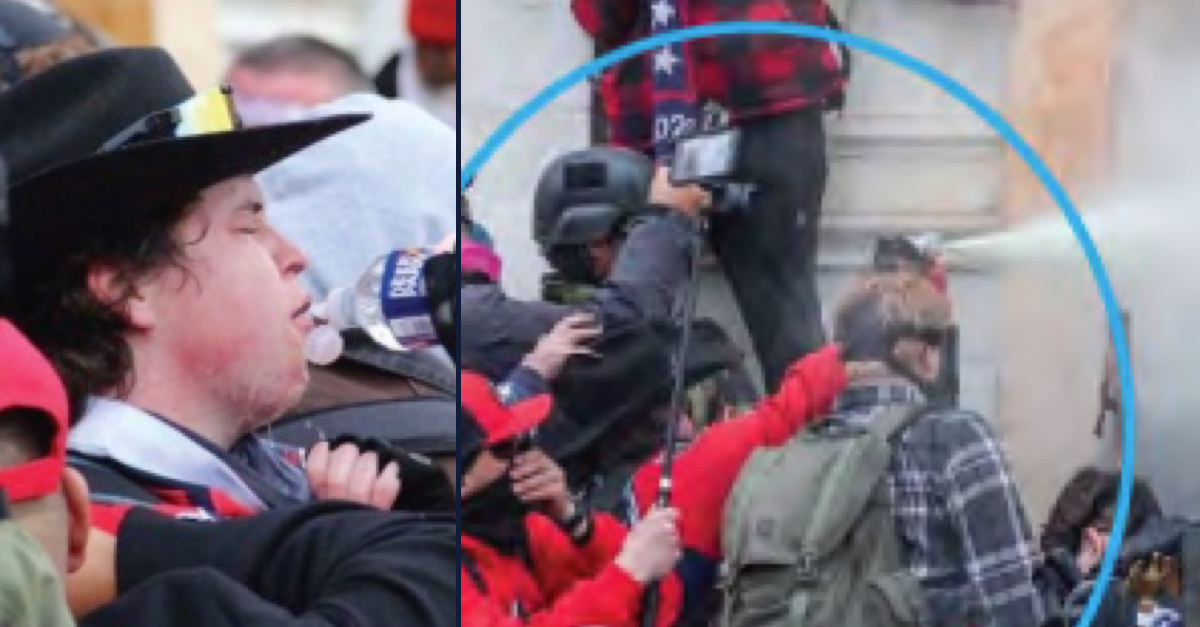 Matthew Ryan Miller seen with a bottle of water, left, and spraying the contents of a fire extinguisher at officers guarding the Lower West Terrace tunnel on Jan. 6 (images via FBI court filing).

A Maryland man who was among the youngest people charged with participating in the Jan. 6 attack on the U.S. Capitol has been sentenced to nearly three years in prison.

Matthew Ryan Miller, 23, threw multiple objects at law enforcement as he shouted and encouraged the crowd around him to keep pushing forward against an already-overwhelmed police force. He waved fellow rioters toward the tunnel on the Lower West Terrace, where he shouted “Come on!” as the crowd changed “Heave! Ho!” and rocked back and forth to push against the officers trying to protect the Capitol from the swarm of Donald Trump supporters angry over Joe Biden’s win in the 2020 presidential election.

According to prosecutors, Miller was draped in a Confederate flag at the time.

Miller pleaded guilty in February to two felonies: obstruction of an official proceeding and assaulting, resisting, or impeding officers.

At a sentencing hearing on Monday, U.S. District Judge Randolph Moss, a Barack Obama appointee, sentenced Miller to 33 months behind bars, followed by two years of supervised release. Miller had faced up to 20 years in prison on the obstruction charge and eight years on the assault charge.

“Twenty-Two Is Not a Child.”

During the sentencing hearing Monday, prosecutors played videos that they said showed Miller’s progression toward the Capitol building.

“Defendant Miller was in the thick of it all, working his way closer and closer to the Capitol, growing increasingly more violent as the day went on and agitating others to do the same,” Assistant U.S. Attorney Jacqueline Schesnol said. “He assaulted officers along with other rioters attacking from all sides.”

“Every one of the defendant’s attacks made it harder for the officers to protect themselves and increase the chance that one of the other rioters’ attacks would succeed,” Schesnol added.

Schesnol said that Miller’s age—he was 22 years old at the time of the Capitol breach, and his defense memo argued that “the pre-frontal cortex of the brain is not fully developed until the age of 25″—is not a mitigating factor.

“Twenty-two is not a child,” Schesnol said, adding that at age 22, people in the U.S. can drive a car, serve on a jury, hold public office, “rent a room at a hotel as Mr. Miller did the night of Jan. 5,” and “lay down one’s life in military service.”

At this, Moss interrupted her, launching a back-and-forth as to whether Miller’s age and inebriated state are mitigating factors.

“We are dealing with someone here who is younger than most [Jan. 6 defendants], perhaps more impressionable, more prone to get carried away by rhetoric, false statements, the emotions of the crowd who was around him, and too many cans of beer beforehand,” Moss said. “It’s not grounds for a departure [from the sentencing guidelines] and not an excuse, but I do wonder in my mind how I compare a drunk 22-year-old to some of these other folks who were stone sober, in their 40s, who knew perhaps a lot better than Mr. Miller did and were perhaps less impressionable, less likely to be moved by a crowd, less likely to be moved by the inflammatory and false rhetoric of the president of the United States.”

Schesnol disagreed that Miller was simply following along with the crowd, and said that he was actually more of an agitator.

“He was encouraging people to get caught up in his rhetoric, as opposed to the other way around,” she said.

Miller: I Just Wanted to “Drink Some Beers” and “Have a Good Time.”

Miller’s lawyer Eduardo Balarezo said that around the time of the 2020 presidential election, Miller had been drawn into the false narrative that voter fraud led to Joe Biden’s win in the 2020 presidential election, and had been spending time with some “unsavory characters,” a reference to Miller’s apparent links to the so-called Proud Boys, a far-right extremist group whose leader, Enrique Tarrio, is facing serious charges in connection with the Jan. 6 Capitol attack.

Balarezo, at Moss’s request, clarified that Miller said he drank at least 10 beers that day. He had also smoked from a marijuana joint that was being “passed around” the crowd and drank some unidentified liquor that was also being shared among the rioters.

Notably, that was the very fire extinguisher that Robert Scott Palmer would later pick up, unleashing the remainder of what was inside on police before throwing the emptied tank at law enforcement. Palmer, who also threw a wooden plank at police officers, was ultimately sentenced to more than five years in prison.

Miller, speaking on his own behalf at the hearing, said that he is ashamed of his actions and that he was “weak” and “terribly misguided” in going to the Capitol.

“My intentions that day were to wear a wild outfit, drink some beers, and have a good time,” he told Moss. “I never thought things would go the way they did.”

In issuing his sentence, Moss said that Miller was “front and center” of the crowd as it converged on the Capitol.

“Mr. Miller, in firing the extinguisher [into the tunnel] didn’t attack single officer, but attack all the officers that were in there,” Moss said, adding that he was troubled by the fact that the crowd behind Miller “cheered … with their approval that he had launched his own separate assault on the officers.”

In addition to the time in prison, Miller will pay $2,000 in restitution toward the estimated $2.7 million in damage to the Capitol, pursuant to his plea agreement.