Judge Sentences Pa. Man to Probation After He Claimed to Have ‘Helped Capitol Police’ on Jan. 6 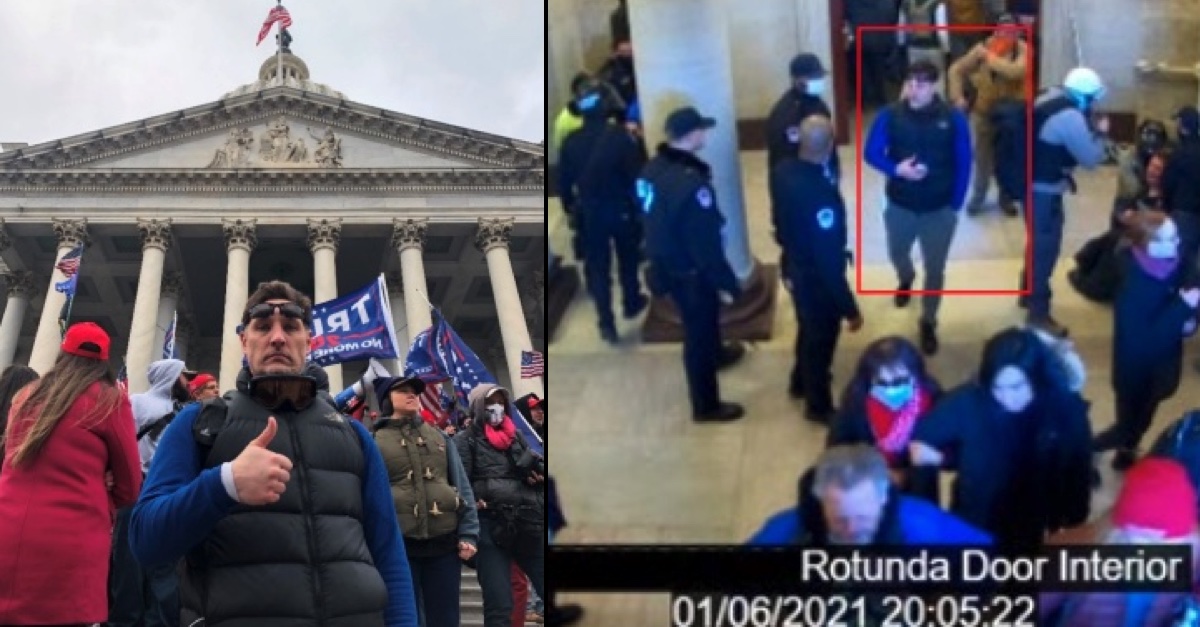 Edward McAlanis at the U.S. Capitol on Jan. 6 (images via FBI court filings)

A Pennsylvania man who watched the chaos unfolding for hours at the Capitol on Jan. 6 before entering the building through breached doors will serve a period of probation only.

Edward McAlanis, 42, had traveled with friends on a bus from his home state of Pennsylvania to the Capitol that day. According to court documents, he didn’t attend Donald Trump’s so-called “Stop the Steal” rally, but instead went directly to the area of the Capitol starting at around 10:00 a.m.

According to prosecutors, McAlanis watched the chaos at the Capitol unfold for about 4 hours before deciding to join the fray.

“What distinguishes this defendant from so many others is that he was present on the grounds of the U.S. Capitol for a period of four hours before he ever approached the building,” Assistant U.S. Attorney Anita Eve said at McAlanis’ sentencing hearing Tuesday, adding that he had the opportunity to “witness the evolution of the overtaking of the Capitol on Jan. 6” and still chose to participate.

“He sat around, let somebody else do all the ugly business of things, and then took advantage of the fact that, ‘Okay, it’s safe for me to go in there,’ but there’s an awareness on his part” that he wasn’t allowed in the building, Eve said.

He didn’t commit any acts of overt violence when he joined a crowd of Trump supporters that entered the Capitol, and he didn’t destroy any property. Although he was among the mob that breached the Capitol as Congress was attempting to certify Joe Biden’s win in the 2020 presidential election, McAlanis insisted that while inside the building, he actually tried to get some of the rioters to behave themselves.

“I was not part of what was going on there,” said McAlanis, who stayed inside the breached building for 10 to 15 minutes. “I didn’t believe in that.”

McAlanis said that once he entered the Rotunda, which he reached by walking past multiple police officers who had been unable to hold back the crowd, he moved brass barriers to the side of the room because he feared that someone might use them in a “violent way.”

He said that he asked a fellow rioter who was climbing a wall in the building to get down because, in his words, “I don’t believe in that.”

He pleaded guilty in November to one count of parading, demonstrating, or picketing in the Capitol building. That charge carries a maximum jail sentence of six months.

Prosecutors admitted that while they didn’t have evidence to refute McAlanis’s claims that he tried to “neutralize the situation” inside the Capitol, they also hadn’t been able to corroborate it.

Nonetheless, Friedrich declined to restrict McAlanis to home detention as the government had requested, and sentenced him to two years of probation and 60 hours of community service.

McAlanis had previously agreed to pay the $500 in restitution for damage to the Capitol that has become a standard part of many Jan. 6-related plea deals.

“Looking at similar cases, I’ve sentenced several defendants who I view as very similar in many respects to Mr. McAlanis,” Friedrich said. “While they may not have been outside the Capitol for as long as Mr. McAlanis, several if not all of them also saw broken glass, heard alarms, and he, unlike them, did seem to take steps to calm the mob inside the Capitol, so I credit him for that.”

“[His] role relative to many rioters was minimal in my view,” Friedrich, a Trump appointee, said, later adding: “Based on a review of many many videos relating to this riot, he appears to be one of the least culpable defendants.”

Friedrich noted that McAlanis lost his job after his arrest for participating in the Capitol siege: he was previously a financial planner for an insurance company, and now works part-time delivering pizzas for a local restaurant.

Friedrich’s two-year probation sentence for the defendant—whom she described as very “civic minded” and involved with his community—means that she will not have oversight of McLanis through the next presidential election. Other federal judges in Jan. 6 cases have taken a different approach.

At the end of the hearing, prosecutors dismissed the remaining misdemeanor charges against McAlanis.