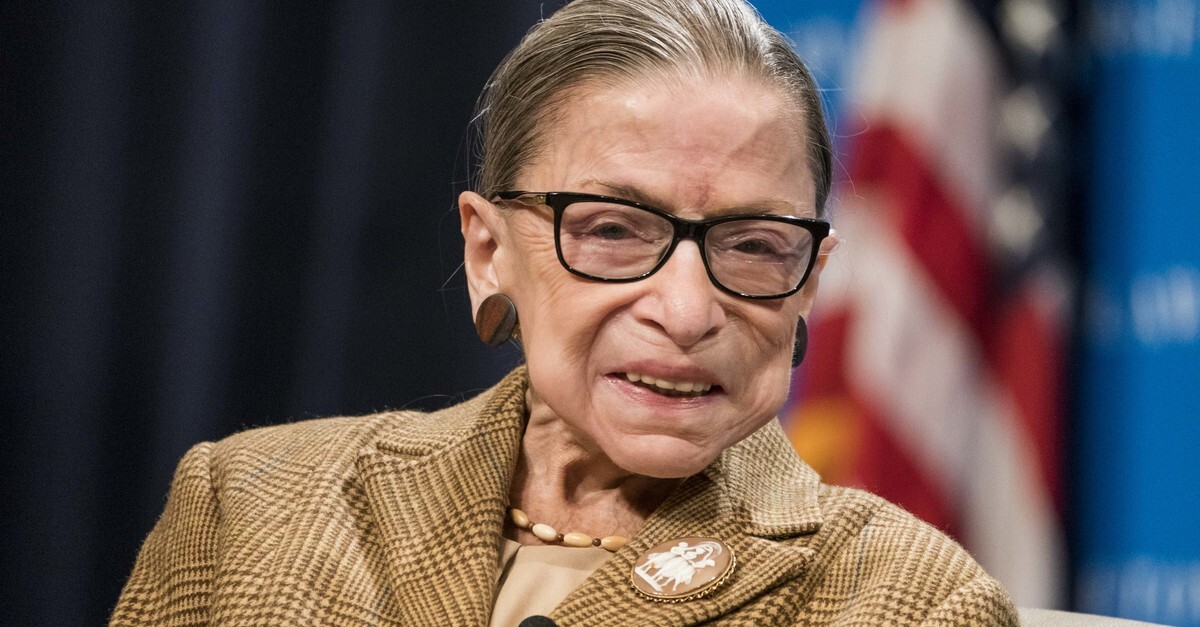 Supreme Court Justice Ruth Bader Ginsburg, the 87-year-old liberal icon of the high court and champion of women’s rights, has died two months after revealing that she was undergoing chemotherapy due to a recurrence of cancer.

The Brooklyn-born justice who became known as the Notorious R.B.G.—and shattered glass ceilings throughout her illustrious legal career—was surrounded by family at home in Washington, D.C. when she died due to complications of metastatic pancreatic cancer, a statement from the Supreme Court said: 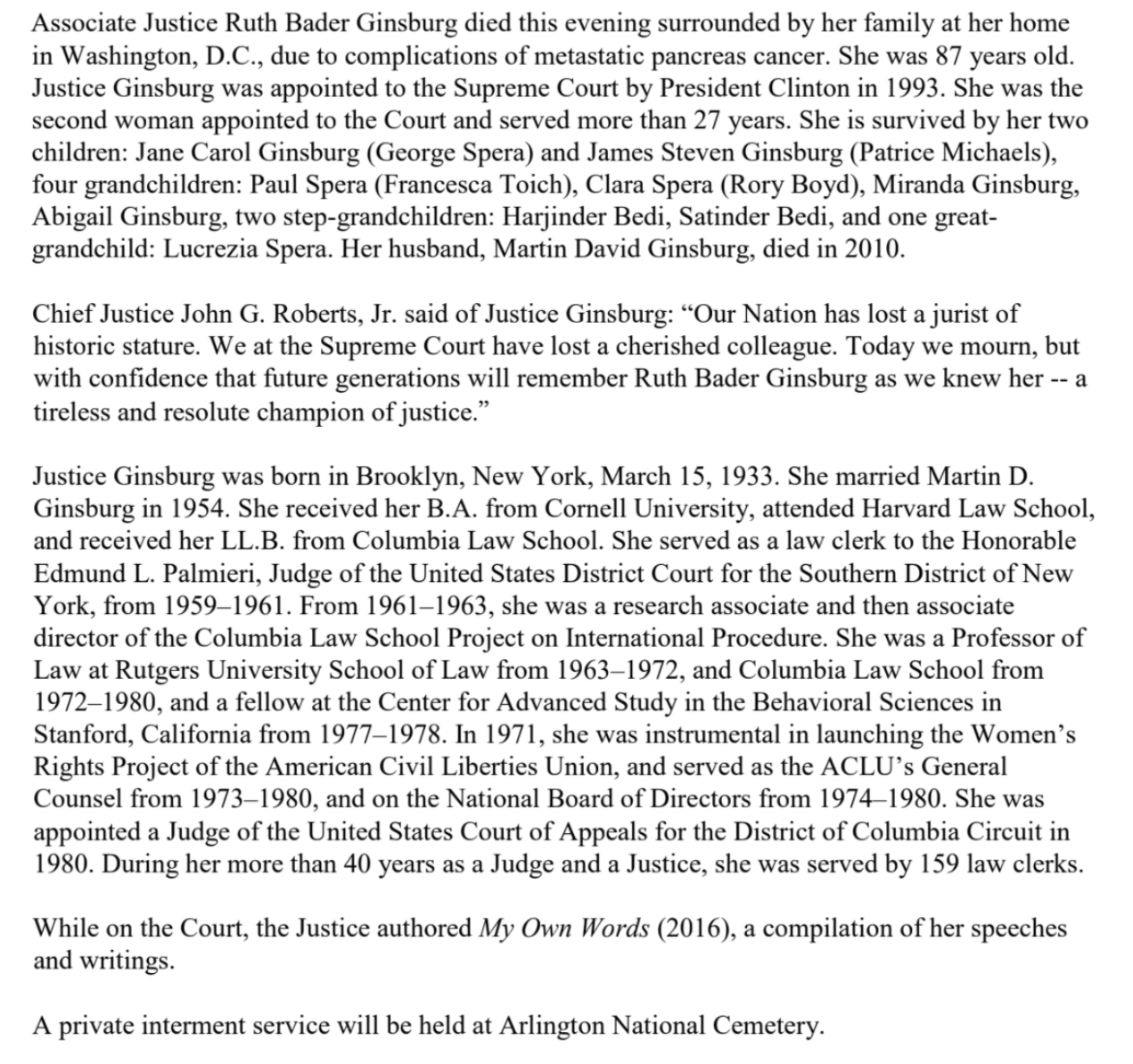 Chief Justice John Roberts said in a statement that America had “lost a jurist of historic stature.”

“We at the Supreme Court have lost a cherished colleague. Today we mourn, but with confidence that future generations will remember Ruth Bader Ginsburg as we knew her — a tireless and resolute champion of justice,” Roberts said.

The Court said a private interment service would be held at Arlington National Cemetery.

In July, Justice Ginsburg was hospitalized to treat a possible infection. Days later, she revealed in a statement that she had started receiving chemotherapy as far back as May to treat a recurrence of cancer. Ginsburg was at that time a four-time cancer survivor. Several months ago, a biopsy revealed lesions on the justice’s liver; chemotherapy followed. Ginsburg also said her hospitalization that week was “unrelated” to the recurrence of cancer:

On May 19, I began a course of chemotherapy (gemcitabine) to treat a recurrence of cancer. A periodic scan in February followed by a biopsy revealed lesions on my liver. My recent hospitalizations to remove gall stones and treat an infection were unrelated to this recurrence.

Immunotherapy first essayed proved unsuccessful. The chemotherapy course, however, is yielding positive results. Satisfied that my treatment curse is now clear. I am providing this information.

My most recent scan on July 7 indicated significant reduction of the liver lesions and no new disease. I am tolerating chemotherapy well and am encouraged by the success of my current treatment. I will continue bi-weekly chemotherapy to keep my cancer at bay, and am able to maintain an active daily routine. Throughout, i have kept up with opinion writing and all other Court work.

I have often said I would remain a member of the Court as long as I can do the job full steam. I remain fully able to do that.

The Supreme Court’s Public Information Office confirmed that Ginsburg had been admitted to The Johns Hopkins Hospital in Baltimore, Maryland for “treatment of a possible infection.”

In 2019, Ginsburg said that, despite health scares, she had no plans of retiring. When commenting on her former fellow Supreme Court Justice John Paul Stevens serving on the court until he was 90 years old, Ginsburg said, “[H]e stepped down when he was 90, so I think I have about at least five more years.”

Justice Ginsburg said she would “do this job as long as [she] can do it full steam.” Ginsburg sat on the high court for 27 years.

Her death will undoubtedly be followed by intense political division in a uniquely polarized time in the nation’s history.

President Donald Trump had already been emphasizing the importance of the Supreme Court to his re-election campaign. Just nine days ago, seven weeks before Election Day, the president announced a revised list of potential candidates should there be a Supreme Court vacancy.

In recent months, rumors swirled that conservatives Justice Clarence Thomas or Justice Samuel Alito might make a surprise announcement and retire in time for Trump to appoint their successor. At the same time, Justice Ginsburg’s cancer diagnosis made national news.

Republican senators, undeterred by the Merrick Garland precedent, have made clear they they would confirm a Supreme Court nominee during a lame duck session of Congress.

Senate Majority Leader Mitch McConnell (R-Ky.) famously refused to move forward with Garland’s nomination with the famous words that “the American people should have a say in the court’s direction.” He later bragged that one of his “proudest moments” was when he “looked Barack Obama in the eye” and told him “you will not fill the Supreme Court vacancy.”

And now, with a Republican majority in the Senate—and after the successful confirmations of Neil Gorsuch and Brett Kavanaugh to the high court—the president has the opportunity to fill a third SCOTUS seat and achieve a 6-3 conservative majority.

Justice Ginsburg’s “most fervent wish” in her final days, her granddaughter Clara Spera quoted her, was that she “not be replaced until a new president is installed.”