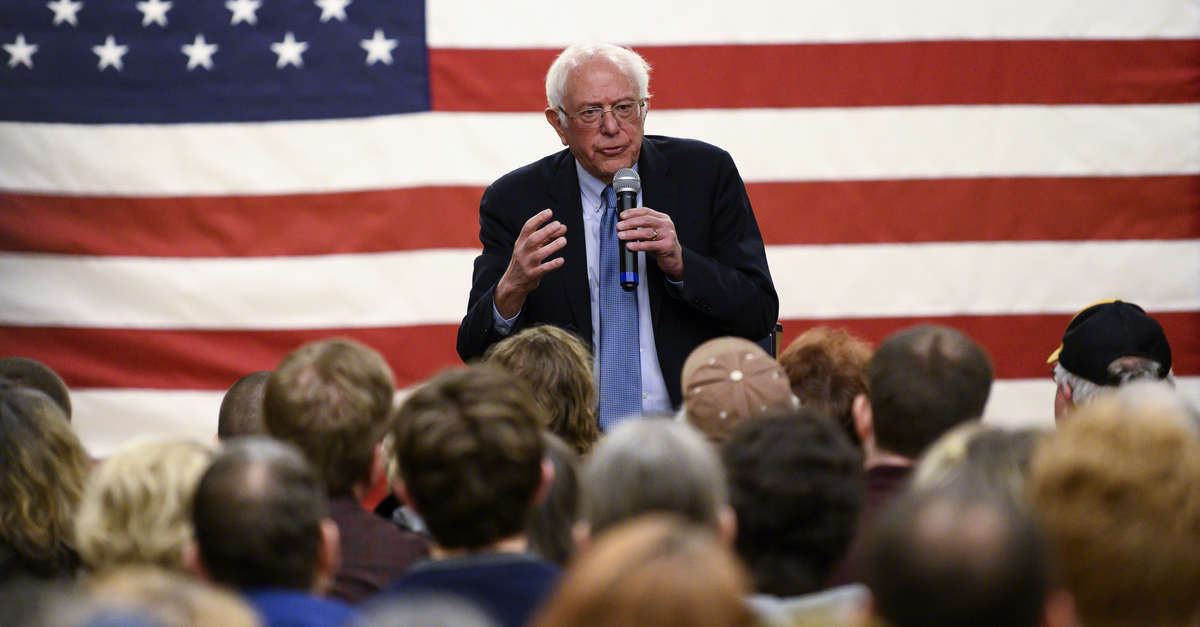 According to the New York Times, Sanders signaled his willingness to put out such a shortlist during a recent editorial board meeting—as part of the publication’s “transparent” endorsement process. The idea was brought up by Jesse Wegman during a discussion about advancing a progressive Supreme Court nominee past Senate Majority Leader Mitch McConnell (R-Ky.).

The relevant portion of that interview:

JW: Senator, I’m with you. You know, Donald Trump came out four years ago with a list of 18 or 20 names. A lot of people believe that that was pretty important in helping push him over the top and certain places. Do you not see the value in ——

Sanders: Maybe. I mean, it’s something, you know — it’s the same thing, who’s my vice president? Got to kind of win the nomination first. I’m kind of struggling to do that. And I want to do that. But you know, it’s not a bad idea. It’s a reasonable idea. My wife agrees with you. Yeah. I’ll take that into consideration. Nothing wrong with that. As to who I’ll potential nominees for the Supreme Court would be. Yep. All right. So if you see that in The New York Times, you know where it came from.

“Releasing a Supreme Court shortlist would help voters understand how a candidate would deal with one of the most important issues facing the country and mobilize voters around a progressive vision for the courts,” Fallon told Law&Crime via email. “Bernie Sanders’ openness to releasing his list is a step in the right direction.”

Fallon also called on the other 2020 candidates to get on board with the idea—and hoped the media would continue to focus on the Supreme Court as well.

“As the field narrows, all presidential candidates should prioritize the courts if they want to show voters they have a real plan to protect any of their other ideas from a hijacked judiciary,” Fallon continued. “The moderators at this week’s Democratic primary debate should ask other candidates whether they will release a list of Supreme Court nominees.”

On Twitter, Fallon also offered some pithy but effusive praise for Sanders:

Demand Justice’s Chief Counsel Christopher Kang elaborated a bit on the group’s happiness with Sanders’s response—but also gushed over the fact that the issue came up at all.

“Bernie’s answer is important, but don’t sleep on the context of the question –– NYT asked him in its editorial board interview, as it decides who to endorse,” Kang tweeted. “Everyone should be a #SupremeCourtVoter as they decide who to support.”

.@WeDemandJustice has been calling on candidates to release their Supreme Court lists — check out ours. https://t.co/j2usPN4gRH

Demand Justice released their own wishlist of potential progressive Supreme Court nominees in October 2019–stressing that a Democratic president and White House think outside the box and get away from the typical slate of long-serving federal judges that typically predominate during a Supreme Court vacancy.

“If we limit ourselves to that universe, we’re only tapping into a fraction on the legal community,” Kang told Bloomberg Law late last year. “We need to look to other dynamic candidates who aren’t currently judges.”

Samuel D. Finkelstein is a scholar of labor and Supreme Court history who currently attends Seton Hall Law School as a J.D. candidate. In an interview with Law&Crime, he praised Sanders for his leadership on the issue of Supreme Court nominations.

“This should be expected of every candidate,” Finkelstein said. “Democrats have a tendency to ignore the judiciary. Now, the courts are arguably the greatest obstacle to progress.”

“Bernie’s campaign is oriented around movement building, not wonkery, but it makes sense he’d take the lead on this,” Finkelstein noted. “He’s serious about winning, and enacting a very ambitious agenda. The courts will play a decisive role in a Sanders presidency.”

The specter of Kavanaugh was also a salient sticking point for Finkelstein and others.

“The Kavanaugh fight showed that Republicans will stop at nothing to pack the Court with far-right ideologues. It’s imperative that the left drop the naive conception of judges as umpires ‘calling balls and strikes.’ Bernie is signaling that he understands the importance of the [Supreme] Court in a way that contemporary Democrats haven’t.”

Esha Krishnaswamy, a law and policy and expert and attorney based in New York, highlighted an infamous Kavanaugh dissent in a case against Sea World as proof of the controversial judge’s reliance on far-right legal theory at the expense of everyday life.

In that case, Kavanaugh determined “an employee has the freedom to be mauled by a killer whale without government interference,” she said. “I can’t believe a sitting judge would ask ‘Who gets to decide if the risk is too high for employees?’ The answer is clear: OSHA.”

“His ruling on workplace safety is from someone who has never had to have a precarious job with unsafe conditions,” Krishnaswamy continued. “The biggest ideological void is the inner understanding and empathy. Some things cannot be learned via legal doctrine. Some things must be learned through experience.”

And the upshot of Kavanaugh’s alleged academic disconnect? It makes the Sanders shortlist idea all the more enticing for progressives.

I think it is an excellent idea because as you know, the Supreme Court is one of the least ideologically diverse institutes in America. Everyone besides Ruth Bader Ginsberg, went to Harvard or Yale for law school. Kagan, Gorsuch, Roberts, Sotomayor and Thomas have all worked in private practice representing corporate interests. We don’t have a single lawyer who worked as a public defender or even worked defending labor.

It shows in their sometimes absurd rulings regarding worker conditions and culpability in criminal justice.

Finkelstein reiterated the left’s commitment to taking the federal courts seriously in the years ahead:

As a law student, and someone who’s spent years studying political history, I have serious concerns about the courts. One in four circuit court judges are Trump appointees, and they’re extremists. No matter what your pet issue is––climate, healthcare, police brutality––any serious reform will face opposition from the courts. It’s more important than ever that we elect a president who is prepared to confront that reality.

Others didn’t offer praise or bash the shortlist idea but suggested that releasing the names of prospective Supreme Court nominees simply does not go far enough.

“Sanders’s naivete about the Supreme Court is stunning, because he has no plan to protect his bold agenda from John Roberts and the conservative majority,” said Take Back the Court Director Aaron Belkin. “All of Sanders’s bold ideas rely on legislation and executive orders that the Supreme Court is almost sure to strike down. The only way to prevent that is to expand the Court, which Sanders doesn’t endorse.”

Take Back the Court has long promoted the idea of expanding the size of the nation’s high court in order to account for the GOP’s dominance over that body—in direct response to the controversy over frustrated Obama pick, Merrick Garland.

Sanders has not warmed up to that idea—telling Democratic debate moderators last July: “I do not believe in packing the court.”

Editor’s note: this article has been amended post-publication to include additional quotations and for clarity.