A lawsuit by the New York attorney general alleging that Amazon failed to protect its workers from the risk of COVID-19 could not come at a worse time for the giant company, which is in the midst of trying to fight off the most significant vote ever to unionize its employees.

“While Amazon and its CEO made billions during the crisis, hardworking employees were forced to endure unsafe conditions and were retaliated against for rightfully voicing these concerns,” said New York Attorney general Letitia James in announcing the Tuesday action.

The New York lawsuit echoes concerns raised by union organizers who have mounted the biggest challenge ever to Jeff Bezos’ long-time determination to keep unions out of the giant Amazon company.

Amazon denounced the attorney general’s lawsuit, saying it did not present an “accurate picture” of Amazon’s efforts during the pandemic. An Amazon spokeswoman, Kelly Nantel, said the company “cared deeply about the health and safety of its workers.”

The union efforts are focused on the 5,800 workers at an Amazon warehouse facility in Bessemer, Alabama who have begun to cast ballots on whether to join the Retail, Wholesale and Department Store Union, RWDSU.

The result will not be known until March but if the union is successful it could trigger similar unionization efforts at Amazon facilities around the country. So Amazon is fighting hard to defeat the union’s effort, including with messages posted in the warehouse bathrooms.

“Even when you go to the bathroom in the bathroom stalls, they have anti-union messages posted at eye level if you’re sitting on the toilet. That’s how extensive their campaign is,” said Stuart Appelbaum, the RWDSU president, on the Law&Crime Network program Brian Ross Investigates. 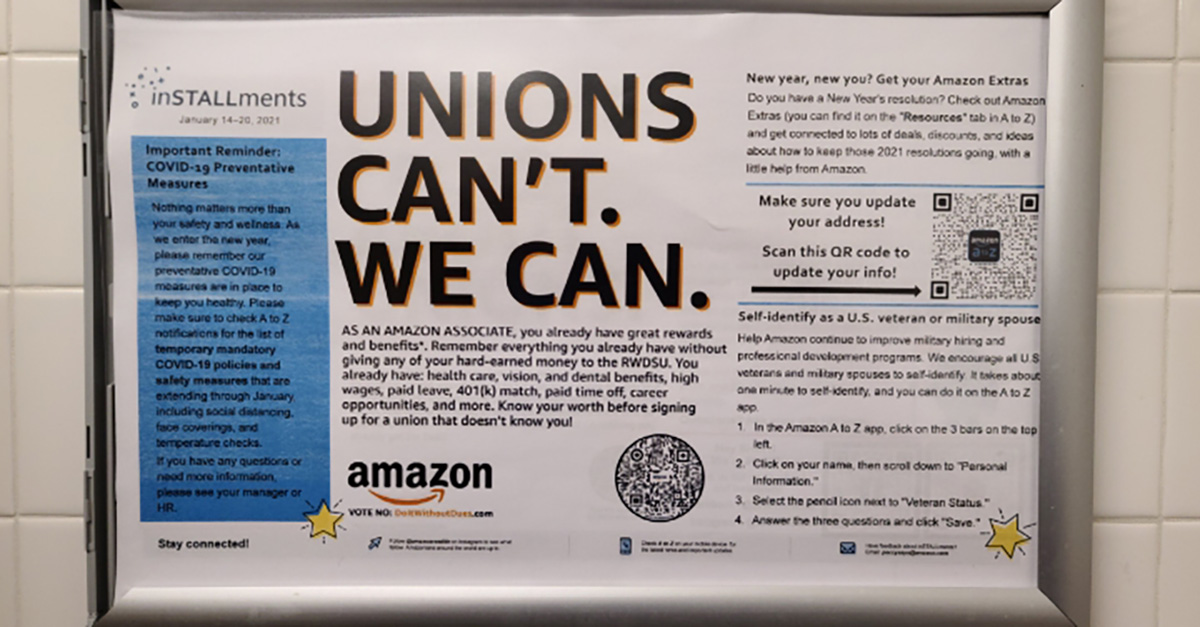 Amazon warehouse employees are receiving multiple text messages each day telling them to vote against the union, according to Appelbaum. And Amazon has launched a television advertising blitz on local television extolling the benefits employees receive.

“We work hard to support our teams and more than 90% of associates at our Bessemer site say they would recommend Amazon as a good place to work to their friends,” Amazon said. “We don’t believe the RWDSU represents the majority of our employees.”

The union president said Amazon has good reason to worry.

Amazon says it pays all workers a minimum of $15 an hour and that they already receive generous benefits without paying union dues. Company officials declined to appear on the program.

But pro-union workers say the company’s amazing distribution system has come at a huge price for Amazon workers, who complain of harsh conditions and unrelenting deadlines and mental stress.

“You have to be worked like a robot, treated like a number instead of a person,” Earlvin Carpenter, a warehouse employee at the Amazon facility in Bessemer Alabama, said in an interview this week on the Law&Crime Network’s Brian Ross Investigates.

“It is tough especially when it’s time to go to break and you’re thinking about ‘should I take the chance of walking out or should I just stay where I am?’” Jennifer Bates told Brian Ross.

The union leader said wages are not the main concern.

“People say to us all the time that it doesn’t matter how much Amazon is paying them if they don’t treat them with respect, if they don’t acknowledge their humanity,” Appelbaum said.

“People feel dehumanized and mistreated. People are getting their assignments from a robot. They’re disciplined by an app on their phone. They’re fired by a text message. They’re forced to work at a pace that isn’t sustainable,” he said.

Amazon filed a complaint last week against AG James detailing the company’s response to the COVID-19 crisis. The complaint accused James of “unlawful attempts to subject Amazon” to “state oversight of activities governed by federal law and enforced by federal regulators.”

Read the NYAG’s lawsuit below: