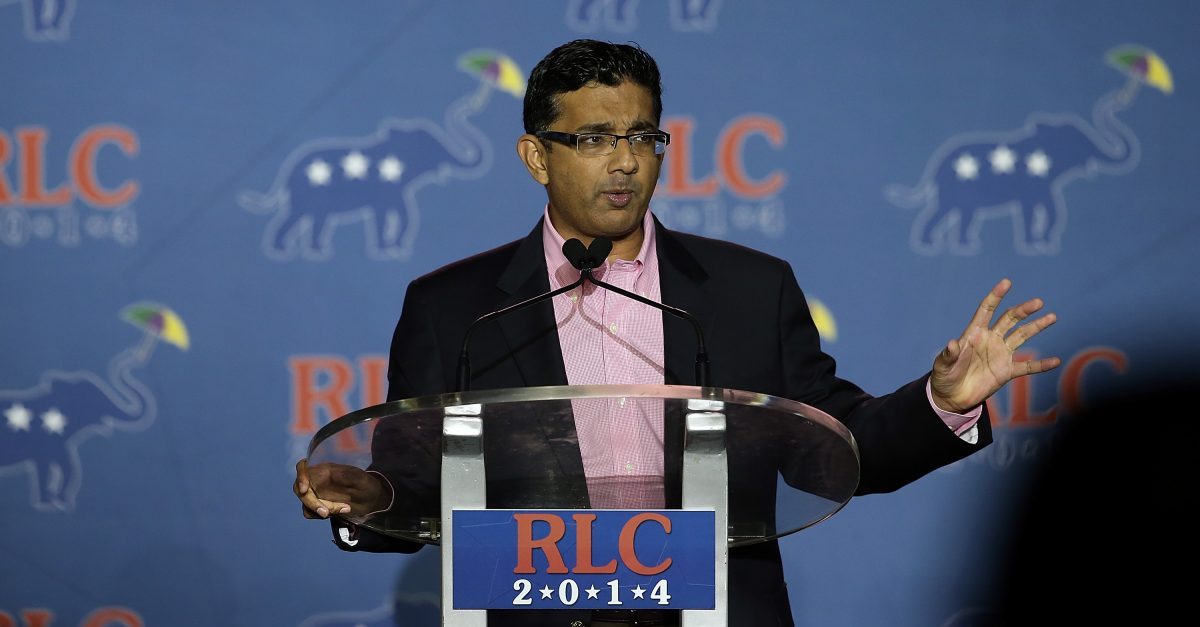 A conservative author and filmmaker recently pardoned by President Donald Trump is under fire after retweeting a Twitter post with the hashtag #burnthejews.

Dinesh D’Souza pleaded guilty to using a “straw donor” in order to make an illegal campaign contribution to a U.S. Senate race in 2012. In 2014, D’Souza entered his plea and was eventually sentenced to five years probation, eight months in a halfway house and a $30,000 fine. On May 31 of this year, President Trump issued a pardon, saying D’Souza “was treated very unfairly by our government.”

Fast forward one month. D’Souza is currently promoting a new film which compares Trump to Abraham Lincoln. In service of that self-promotion, D’Souza retweeted a Twitter post by user @RedManDan84. Twitter subsequently suspended that account, but not before multiple users made screenshots of D’Souza’s retweet:

Twitter user Ryan Adams–who does not appear to be the country singer of the same name–also noted the D’Souza tweet by retweeting the original screenshot captured by Twitter user @smoobydog:

Adams’ post went semi-viral. After that, Twitter more or less collectively leapt into D’Souza’s mentions–accusing him of harboring anti-semitic beliefs.

Really Dinesh? “#burnthejews“? WTF is wrong with you felon?

I did not see the hashtag. Just trying to share the trailer on social media https://t.co/u1Wn2JPKLe

Dinesh D’Souza says he did Nazi that someone used the hashtag #burnthejews in a tweet he retweeted. https://t.co/TAvXnvL36u

Don’t worry, Dinesh. Everyone accidentally tweets #burnthejews from their abhorrently racist fans. Could happen to anyone. I’m sure it says nothing about who you attract with your messaging. https://t.co/d3ML81eahz

2 people the prez has pardoned:

Dinesh, who retweets a fan’s tweet with the hashtag #burnthejews

As the controversy threatened to die down, however, another Twitter user noticed that D’Souza retweeted another controversial hashtag right after the #burnthejews fiasco occurred. This time, the hashtag read: #bringbackslavery.

How about this one? 🤷🏻‍♀️ it’s fresh and new and after you claim you didn’t see the Jew one…perhaps after that you’d consider being a tad more careful but I guess that gives ur old racist ass a lot of credit you don’t deserve pic.twitter.com/d9fhUyVJb7