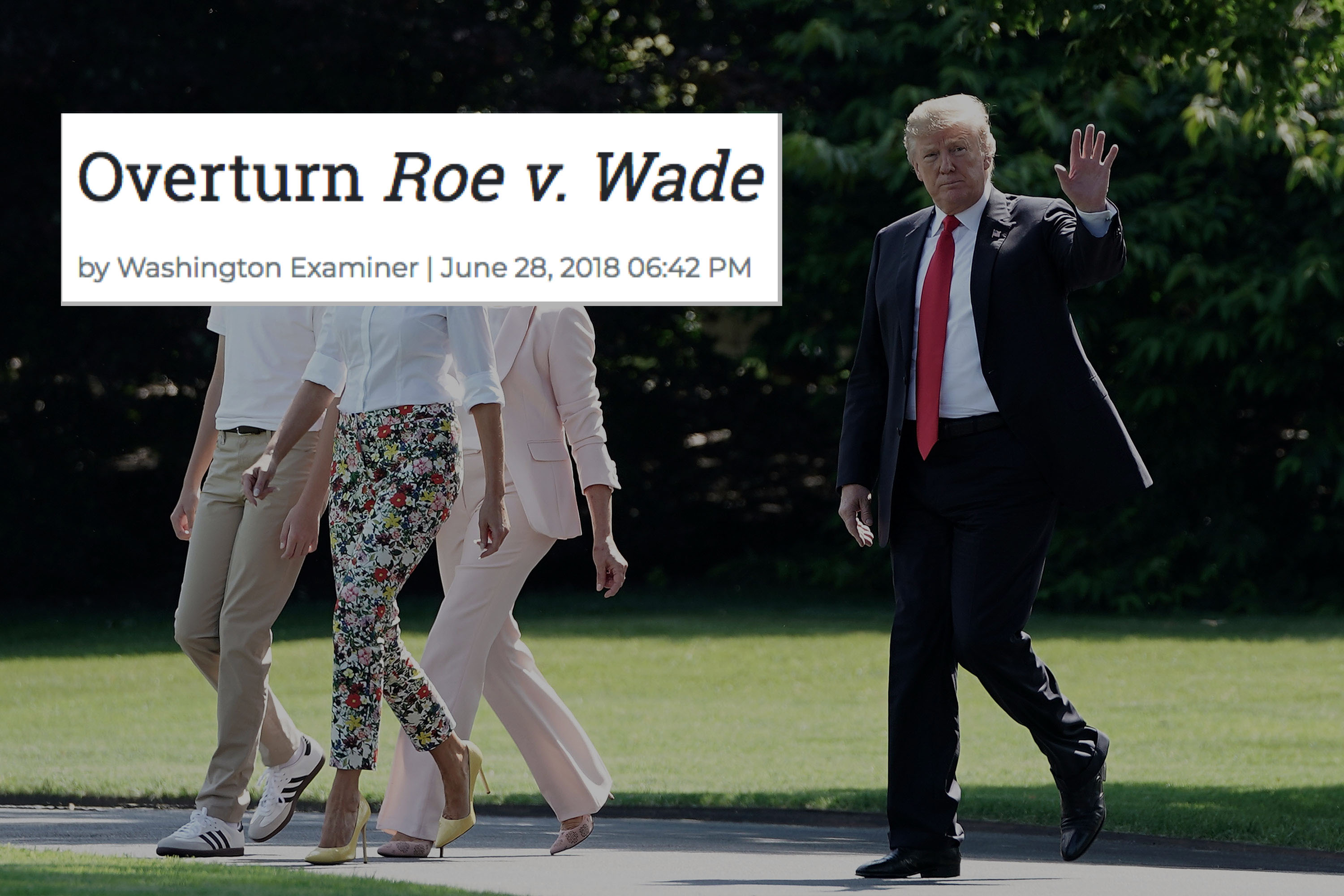 Supreme Court Justice Anthony Kennedy‘s imminent retirement has reinvigorated a national debate regarding the continued longevity of the landmark Roe v. Wade decision. A bi-partisan collection of conservative senators has even gone so far as to suggest that President Donald Trump‘s replacement should commit to keeping Roe intact.

But some conservative voices are taking the opportunity to telegraph exactly the opposite. On Thursday, the Washington Examiner ran an editorial titled simply, “Overturn Roe v. Wade.”

Pulling no punches, the editorial begins, “We write not to praise Anthony Kennedy’s jurisprudence, but to bury it.”

Across 31 years, Justice Kennedy issued many rulings, good and bad. But his most lasting legacy was the travesty he released 26 years ago today, Planned Parenthood v. Casey. With airy, mystical reasoning, unrooted in the Constitution, the common law, or the natural law, he talked himself into saving a precedent that was indefensible legally, scientifically, and morally.

The editorial goes on to make its case by briefly explaining the “right to privacy” theory undergirding the Roe decision. Kennedy didn’t take part in that ruling, of course, but added his own imprimatur during one of his first significant cases on the nation’s highest court.

In the 1992 case of Planned Parenthood v. Casey, Kennedy wrote a joint plurality opinion with Justices Sandra Day O’Connor and David Souter. One passage of his decision is frequently cited by conservatives as evidence of Kennedy’s betrayal of judicial restraint. An abbreviated version of the following passage appears in the Examiner’s dismissal of Kennedy’s time on the court:

These matters, involving the most intimate and personal choices a person may make in a lifetime, choices central to personal dignity and autonomy, are central to the liberty protected by the Fourteenth Amendment. At the heart of liberty is the right to define one’s own concept of existence, of meaning, of the universe, and of the mystery of human life. Beliefs about these matters could not define the attributes of personhood were they formed under compulsion of the State.

This passage–and all it represents–are described as anathema to movement conservatives. The editorial continues:

Kennedy added turgid and empty language about how “liberty finds no refuge in a jurisprudence of doubt.” Here, he was invoking the crutch of stare decisis, the legal principle that precedents deserve special weight and should normally be upheld. That, and that alone, is what Roe and Casey’s defenders will lean on today..

Indeed, the term stare decisis is finding itself subject to the occasional fit of interest as Democrats, liberals, leftists and moderates invoke the doctrine as a sort of litmus test for the next Supreme Court justice.

Senate Republicans–and most conservative-leaning media–have mostly stayed quiet about the prospect of overturning Roe and upending the high court’s stare decisis posture. And, as noted, even Republican senators like Susan Collins and Lisa Murkowski–along with conservative Democratic Senator Joe Manchin–have issued statements supportive of keeping abortion legal and reflecting their opinion that stare decisis applies to Roe and its legal progeny.

Others still are suggesting that invocations of Roe‘s potential demise are akin to the cries of Cassandra or Chicken Little. So, the Washington Examiner’s editorial stands out as a clear and honest statement of principles.

The editorial ends with the idea that Roe v. Wade is comparable to the 1857 Dred Scott decision deeming slavery constitutional:

Kennedy’s ruling hid naked politics behind meaningless words. It gravely harmed the court and our politics, and its body count is massive. As Kennedy, blessedly, vacates his seat, the central mandate for the man or woman who will take his seat, and for all the justices, is to wipe away a disgrace that ranks alongside Dred Scott, and overtun [sic] Roe and Casey.

Editor’s note: an editorial reflects the overall political positions of an entire news organization. Endorsements for political offices are usually made in editorials. More frequently, opinion-editorialists write articles expressing their own personal opinions–which purportedly do not reflect their entire paper’s political position. Thursday’s Examiner editorial is indicative of the paper’s overall outlook on the issue of abortion.