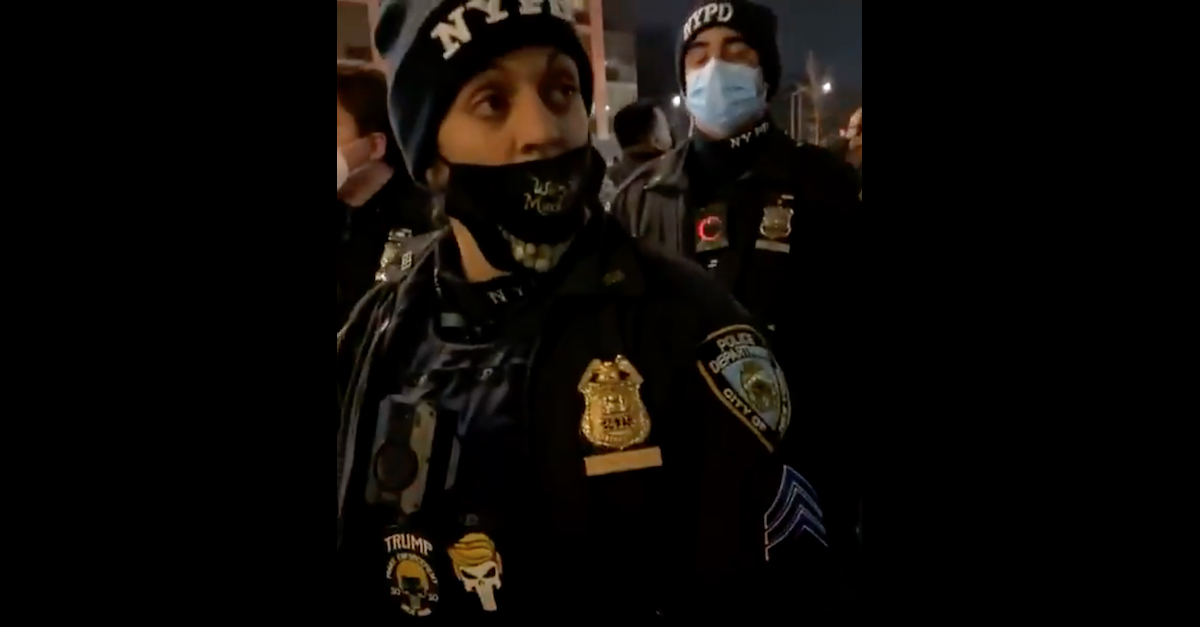 The New York City Police Department has launched an investigation and subjected a sergeant to internal discipline after she was captured on video and in still photos wearing Donald Trump patches attached to her uniform.  That’s according to official department tweets and reporting by the New York Post.

We are aware of a video showing one of our members wearing a politically oriented patch.

The officer has already received an initial discipline.

A further investigation is ongoing. pic.twitter.com/t6nZlvFPl5

The video, which appears to have been captured by a self-described “Black Lives Matter” activist known as “Nicky B,” shows the sergeant and other officers trading barbs with activists at a Black Lives Matter protest after dark on Friday.

The recording was uploaded both to Twitter and to TikTok.  A tweet identified the officer as Sgt. Dana Martillo.  The New York Post said it could not independently confirm her identity; however, a subsequent tweet by the New York Police Department Sergeants’ Benevolent Association also identified Sgt. Martillo as the person involved.  Gothamist, a New York City-based publication, reported that the name “Martillo” was visible on the sergeant’s uniform in some images from the scene.

Last night Sgt. Dana Martillo of the @NYPDnews wanted to make it very clear that she doesn’t care about COVID or following the nypd’s code of conduct which forbids political attire. She was hostile and aggressive all night during a peaceful protest. #nypd #covid #AbolishThePolice pic.twitter.com/kFdqEl0ybH

One of the sergeant’s patches showed a skull bearing hair which was unmistakably like Trump’s. The other showed a similarly coiffed skull with blue eyes and the verbiage: “Trump: Make Enforcement Great Again.” The skull was flanked on each side by digits spelling out the year “2020.”

The skull appeared to be similar to that of The Punisher, a Marvel Comics character, the Post noted.

Citing comments on Twitter, the Post noted that “[t]he Punisher logo is popular among the far-right so-called ‘Three Percenters’ movement.”  Newsweek reported shortly after the Jan. 6 siege on the U.S. Capitol in Washington, D.C., that Marvel was under pressure to retire the character after the logo was also seen being used by white supremacists and at QAnon events.  Vulture, however, explored in November 2017 why many police officers and soldiers loved the character.  It republished the article with a new introduction in June 2020 with nary a mention of either white supremacy or QAnon.  From the piece:

Police officers in Wisconsin, Kentucky, and central New York have all appropriated the Punisher. Google searches turn up a bevy of Punisher-themed apparel, stickers, and accessories aimed at stoking pride for the military and boys in blue. The symbolism has even trickled down to American-trained Iraqi security forces and militias.

As Marine vet Matt Salvatico puts it, “He has a job to do and he does it. No political correctness, no rules other than his own, he just does what needs to be done. Period.”

Others told Vulture that the law enforcement community’s embrace of The Punisher was “in bad taste at best, downright scary at worst,” the publication said in a summary of such views.  That’s because the character made life-or-death decisions about punishment, retribution, and death outside the channels of accountability that society requires of men and women in uniform.  That includes civil courts of law for police officers and sheriff’s deputies.

The logo, thus, appears to have different meanings to different groups of people.  It is unclear from current reporting what meaning the sergeant attached to the logo on her patches.

New York City television station WPIX-TV noted that the patch was against department policy. It reiterated that the nature of the discipline the officer received is unknown.

Members of the NYPD must remain apolitical — it’s essential to public trust & officers’ ability to perform their jobs. https://t.co/zsTskDO10Z

The New York City Sergeants Benevolent Association tweeted that the sergeant — identified as Martillo — should be afforded the same treatment as NYPD Chief Terence A. Monahan.  The chief was photographed taking a knee with BLM protesters — which the SBA promptly shared and mocked as a “political statement.”

“Nothing happen to him!” the SBA tweet said.  “DOUBLE STANDARD or WHITE SHIRT IMMUNITY?”

NYPD Sergeant Martillo should be treated the same as NYPD Chief Monaghan when he made a political statement. Nothing happen to him! DOUBLE STANDARD or WHITE SHIRT IMMUNITY? https://t.co/M7BlzUDSh2 pic.twitter.com/YAnreS4heI

Ed Mullins, the head of the SBA, told the Post that Martillo should simply have been told to remove the patch.

Gothamist reported that the video was recorded at a protest outside Brooklyn’s 84th Precinct.  The protesters wanted one of the precinct’s officers fired; they say he “pointed a gun them as they demanded he wear a mask” during a separate “protest last month,” Gothamist said.