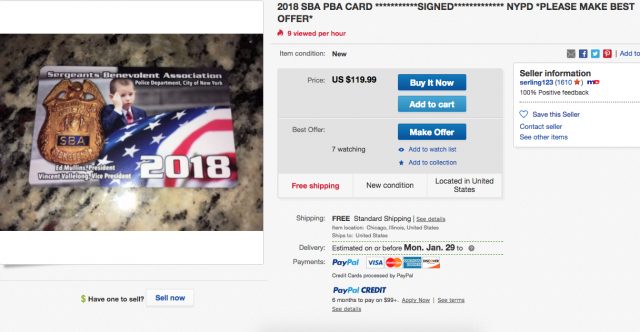 Officers with the New York City Police Department (“NYPD”) are allotted 20 so-called “get out of jail free cards” per member, according to multiple media reports.

News of the cards’ existence was verified in a New York Post article published Sunday afternoon. The tenor of the Post’s reporting was a bit odd: focusing on the tender feelings of NYPD officers upset because their allotted number of cards has dwindled from 30 to 20 per person per year.

They are treating active members like shit, and retired members even worse than shit. All the cops I spoke to were…very disappointed they couldn’t hand them out as Christmas gifts.

According to Sunday’s report in the Post, the courtesy cards are often used to avoid culpability for minor offenses like speeding tickets–with users of the cards operating on the assumption that presenting one to an officer means you’ve got made status within the reaches of the NYPD organization.

A 2004 article from Newsday–approvingly shared on the PBA’s own website–confirms the intent and utility of the courtesy cards. That article notes, “the [PBA] union encourages officers to avoid ticketing cardholders.”

Due to the NYPD’s reputation, however, criminal justice advocates have questioned whether the cards might be used by friends, family and cop-affiliated individuals to avoid punishment for larger crimes. Multiple Twitter users reacted to the news of the “get out of jail free” cards by comparing the NYPD to a criminal, gang-like organization.

The PBA’s controversial boss, Patrick Lynch, apparently made the decision to limit the annual number of cards given to each active member of the NYPD from 30 to 20–while halving retirees’ allotment from 20 to 10 per person per year. Lynch’s decision was reportedly made after many of the cards were discovered being sold for prices in excess of $200 per card on eBay.

Law&Crime reached out to the PBA for comment on the cards. The PBA did not deny the existence of the cards, but refused to comment directly. After being transferred, however, a voicemail left with PBA spokesman Albert W. O’Leary was not returned at the time of publication.

This story will be updated if and when any of the above-mentioned parties reply.