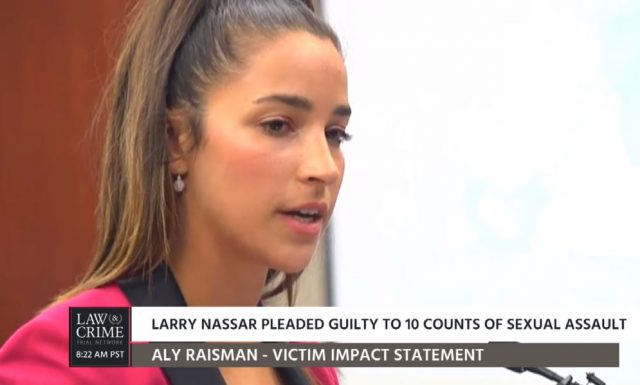 When the sentencing hearing of Larry Nassar began nearly a week ago, more than 80 women and girls had planned to give victim impact statements, describing their experiences with the former Michigan State University and USA Gymnastics doctor, who pleaded guilty to seven counts of first-degree criminal sexual conduct. That number, while sizable, was only a fraction of the number of former patients who accused Nassar of sexual assault. After several days of powerful statements, including those of former Olympians, that number has increased to nearly 160.

The hearing was originally set to wrap up Friday afternoon, but is now expected to continue into Tuesday.

Gold medal winner Aly Raisman spoke on Friday, not just to call out Nassar for abusing her and others, but to lay blame at organizations that empowered and enabled him, like USA Gymnastics and the U.S. Olympic Committee.

Other Olympians who spoke out included Jordyn Wieber and Jamie Dantzscher. McKayla Maroney prepared a statement that was read in court.

Hearing strong words from these role models to many, and from dozens of regular women and girls, has given strength to more survivors of abuse to come forward. Others, who planned on speaking anonymously, are now volunteering to make their identities public and to appear on camera while they address Nassar.

MSU gymnast Lindsey Lemke perhaps put it best when she addressed Nassar in the closing words of her statement on Thursday, saying, “You have pissed off the wrong army of women.”