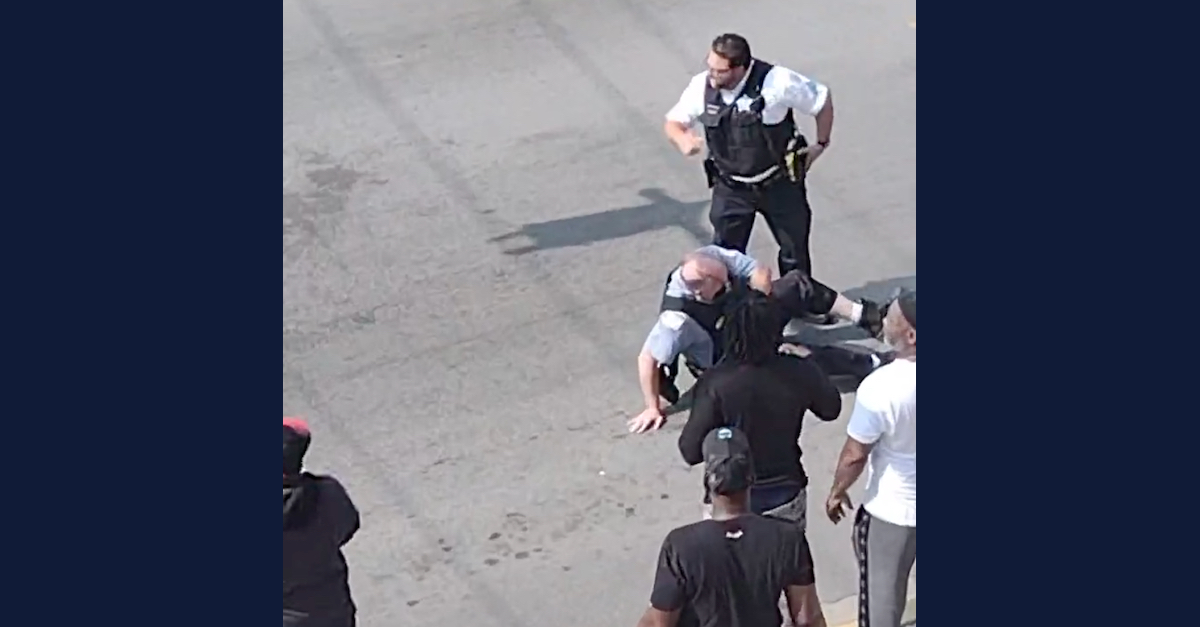 A naked Chicago woman allegedly attacked a police officer, stole his police-issued SUV, and then hit him with his own vehicle.

Video captured on a cellular phone was uploaded to Facebook by witness Rube Dunning. In the footage, the officer in question can be seen sitting on the pavement and bracing his legs as if in pain.

In the video’s caption, the witness says the officer was “ran over with his own squad car” after an attempt to help an alleged “naked drug addict female.” Dunning also wrote that he was “later informed” the woman had been raped and drugged some time before the incident.

“It was horrific; it’s sad what happened to the officer,” he told Chicago ABC affiliate WLS-TV. “The young lady was completely naked.”

The woman’s mother, who asked to remain nameless, also alleged in comments to the TV station that her daughter was on drugs – saying she had called asking for help multiple times that morning.

It all started at around 9:40 a.m. on Monday, June 13, 2022, Dunning told the TV station. He said the officer stopped to help the woman and she attacked. The rest allegedly happened in quick succession.

“He got out of the car to see what was going on with her, because she was completely naked,” Dunning went on, “and she ran and jumped in his car and ran over him.”

After that, the woman allegedly drove the police car onto the Eisenhower Expressway. Next, the car crashed into several vehicles.

“Then, all of a sudden, I got hit by a police car,” Nicolas Ramsay, an emergency room medical resident who was on his way to work at the time, told the TV station. “The police car hit several cars and stopped right in front of me and I saw a woman jump and run.”

According to the Chicago Sun-Times, the woman has been identified as 34 years old and crashed near the Stroger Hospital where she was subsequently detained and sent for psychological examination. The officer was treated at the same hospital and then released.

The Chicago Police Department says at least two officers were involved and initially responded to the area in question in response to a report of gunfire in the West Garfield Park neighborhood of the Windy City.

The woman has reportedly yet to be charged as of this writing.

Her family arrived at the hospital later that same day.

“The officer was run over by this woman — legs received some type of injuries as well as a laceration to the head,” Brown said on Monday. “The officer is in the hospital being treated as we speak. We’ll get more updates as we learn more. We don’t know why the woman was laying in the street unclothed.”