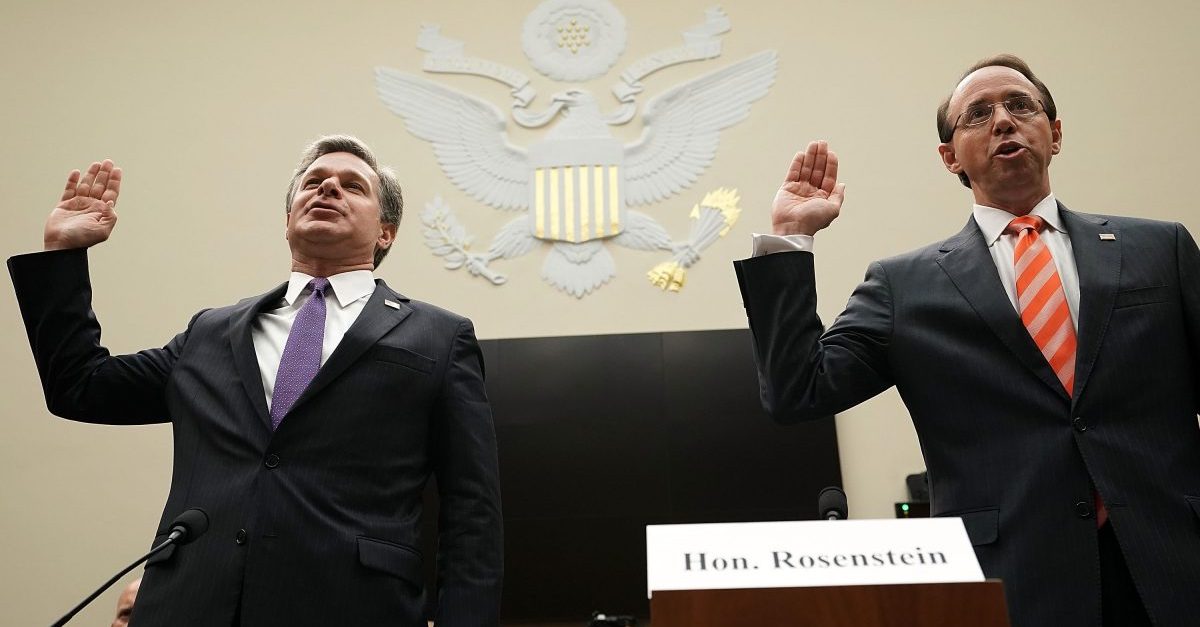 In Shakespeare‘s Henry VI, Dick “The Butcher” proclaims, in one of the scribe’s most quoted and notorious lines, “The first thing we do, let’s kill all the lawyers.” ​The phrase is cited, in most instances, either as a crude lawyer joke or, at the least, as a preamble to some critique of my legal brethren. In reality, however, Shakespeare may have been doing just the opposite, alluding to the critical role lawyers play in maintaining law and order. After all, the line appears as Jack Cade and his team of conspirators discuss overthrowing the government and ​killing those ​guardians​ of law, the argument goes, as was necessary to clear the path for their villainy.

It’s hard not to be reminded of the interpretation of that line, as the nation’s top law enforcement comes under fire, with more barbs certain to come. President Donald Trump-appointed FBI Director Christopher Wray became the latest to get caught in the political crosshairs yesterday by contradicting the president on the now obvious reality that Russia is, and has been, meddling in our elections and that the Mueller investigation is not a witch hunt. But why does defending someone like Wray come down to politics? Wray is a registered Republican who has donated to a wide range of GOP candidates including Mitt Romney in 2012 and John McCain in 2008 (with no donations to Democrats). Is it because he is one of “them?” A handful of law enforcement leaders making the same tough calls they make every day, but now suddenly being judged through a purely zero-sum partisan lens?

​These days just uttering the name James Comey can feel like provocation. ​The former FBI Director, former Manhattan U.S. Attorney and former Deputy Attorney General for President George W. Bush, was accused by many on the left of handing the election to Donald Trump by unnecessarily and improperly criticizing Hillary Clinton despite not seeking to indict her and then making public the re-opening of that investigation shortly before the election. ​T​hen castigated again for hinting at concerns about then Attorney General Loretta Lynch‘s independence in the Clinton investigation. Of course, many on the right have targeted Comey for criticizing, and even mocking, the president, ​for​ failing to indict Hillary Clinton and a host of other alleged sins. It’s safe to say that one thing partisans of both sides seem to share is a disdain for ​James Comey. ​Except, of course, that as foolish or even egotistical one may think his choices were, there is no evidence​ — ​none​ — ​that anything Comey did or didn’t do was driven by political bias or reflected anything other than what he thought would benefit the nation.​ And while many Americans do not have a favorable opinion of Comey, polls show that most still believe he is telling the truth.

Less than two years ago, he ​was both admired and appreciated for his independence by leaders of both parties​. ​Now, in part, it’s that very independence that leaves him deserted on his “Higher Loyalty” island.

Deputy Attorney General Rod Rosenstein, also a former U.S. Attorney and registered Republican, wrote the report requested by President Trump that served as the initial justification for firing Comey​:​ “It is a textbook example of what federal prosecutors and agents are taught not to do,” Rosenstein concluded​ about Comey’s public statements on the Clinton investigation​. Those findings were later supported by an apolitical Inspector General Report. Yet now, a handful of House Republicans are frustrated with Rosenstein’s unwillingness to allow the Special Counsel investigation to become a political weapon, even preparing impeachment proceedings against him. That’s with no evidence (and despite his right leaning background) that any ​of his ​decision​s​ has been driven by anything other than a heartfelt and entirely supportable belief he is doing the right thing for the investigation and the country.

Then there is Robert Mueller, the life long Republican, Marine Corps hero, and former Director of the FBI now serving as Special Counsel overseeing the investigation into Russian collusion. While Mueller himself seems politically shielded from right-leaning missiles, some have found a tangential target in the investigators and lawyers working for him instead. (Can​ ​you imagine how much more vociferous the criticism would be from the far-right if the person running the investigation were a life-long Democrat even if more of the people he hired were Republicans than Democrats?). Others​ ​are just ​hurling ​​conclusory ​political swipes ​​at ​the Special Counsel’s ​indictments ​and actions ​without an iota of proof to support those​ scurrilous claim​s​.

But ​beware, ​if Mueller decides to clear the Trump campaign of wrongdoing, criminal or otherwise, ​some on the left and far​-​left currently defending​ the investigation will likely accuse him of “playing politics” — also without the slightest justification.​

One can certainly argue that James Comey, but also Rosenstein or Mueller or Wray, have made mistakes, yet there has not been a scintilla of evidence found from the exhaustive IG Report or elsewhere that suggests they are, or were, politically motivated​​.

A​s​ FBI Director Wray correctly said in the wake of the IG report: “This report did not find any evidence of political bias or improper considerations actually impacting the investigation under review.” But somehow even that led many to accuse Wray himself of bias.

To be clear, it is the ​law enforcement​ leaders and former leaders, ​not their subordinates, ​​making the calls on major decisions the country is ​discussing. To accuse these high profile investigations of bias is to ​implicate ​the person at the top of them, at the least, being complicit in corruption. When do those who claim to support law enforcement say enough is enough with the aspersions?​

What is confounding is that much of the criticism of law enforcement bias is coming from the right, many of whom would describe themselves as pro-law enforcement. How can one claim to be pro-law enforcement in this country while expressing ​criminal defense attorney-type arguments ​about the motives of most of the leading law enforcement entities run by Republicans? ​​When do those who prioritize apolitical law enforcement over politics stand up for all of those on the bias firing line: Wray, Mueller, Rosenstein, and yes even Comey. Criticize their actions or decisions — but ​without any evidence, ​not their motives​.​

As Rod Rosenstein said recently after the indictment of the 12 Russians: “When we confront foreign interference in American elections, it is important for us to avoid thinking politically as Republicans or Democrats and instead to think patriotically as Americans.”

Shakespeare seems to have recognized​*​ that if we “Kill All the Lawyers,”​ ​we also kill the rule of law itself.​ ​These days, you don’t need to actually kill them to break down the rule of law, just accuse the leaders of being unscrupulous and corrupted partisans.

​—— ​
*There is some debate on the meaning of the Shakespeare line, but for the purposes of this piece I have adopted the view advocated by many lawyers.