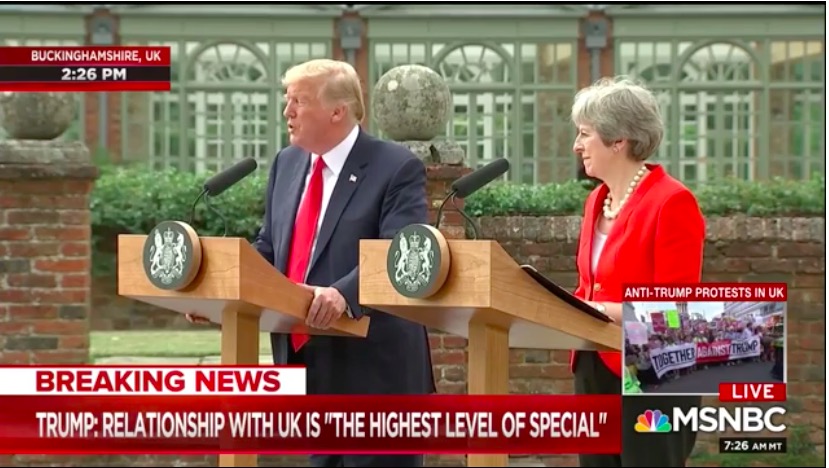 Ho boy, Trump is at it again, this time, putting his CNN-aversion on the world stage. Today, during the president’s press conference with British Prime Minister Theresa May, CNN’s Jim Acosta called out a question as the president called on Fox News’ John Roberts.

“CNN is fake news,” Trump shouted at Acosta. “I don’t take questions from CNN.” Trump continued to give the question to Roberts, remarking “let’s go to a real network.”

“We’re a real network, too, sir,” responded Acosta, but to no avail.

Because this all happened in the UK, American constitutional law doesn’t directly apply, and Trump’s behavior just does what it always does – makes Americans look like idiots for having elected him. But what if he continues his exclusionary behavior at home? Can he really do that?

Jim Acosta is an accredited member of the White House press pool, so it’s pretty inappropriate for the president to declare CNN unfit to participate from the podium. Legally, though, it’s less clear just how much the president can push around the network.

Law & Crime spoke today with Floyd Abrams, winning lawyer in the famous Pentagon Papers Supreme Court case and arguably the best-known First Amendment attorney in the country (not to mention father of Law & Crime founder Dan Abrams). In 2016, Abrams said that Trump, “may be the greatest threat to the First Amendment since the passage of the Sedition Act of 1798.” Here was Abrams’ take on Trump’s behavior today:

Generally speaking, there’s no question that such stifling the press has no place in a free and open democracy. Courts have held that government press conferences are “public fora,” open to the media.  As such, restrictions must be based on criteria other than content.  The Trump/Acosta situation creates an interesting legal puzzle, though. Trump couldn’t have been restricting CNN’s access based on the content of Acosta’s question – because there no question had even been allowed. Trump may be excluding CNN based on CNN’s general content and coverage – but simply refusing questions now and then isn’t necessarily restrictive to the point of illegality. Bottom line, we’ll have to see what Trump does when he’s in the U.S., and whether he continues to roll out this “fake news” thing at every briefing.

“The White House doesn’t have to conduct press conferences and probably can invite whom it wants to presidential interviews, but where a reporter is part of an accredited press pool, and then gets excluded on the basis of the content of his question, that certainly raises First Amendment concerns.”

While there’s no case law on a president declaring “fake news” on an entire network during a presser, there is some that could give us some pretty good guidance. In Sherrill v. Knight (D.C. Circuit 1997), The Nation magazine sued after a journalist was denied a White House press pass. In that decision, the Circuit Court and lower court both said that the White House can’t just deny credentials based upon what the journalists say. “..[W]e agree with appellants that arbitrary or content-based criteria for press pass issuance are prohibited under the first amendment,” the D.C. court wrote in the decision.

In another interesting case from 1988, the Jefferson Parish Sheriff’s Office didn’t like a story by the Times-Picayune. As retaliation, the deputies stopped notifying the newspaper’s reporters of press conferences, and also barred them from attending any press conferences about which they were aware. In Times-Picayune Publishing Corp. v. Lee, the court held that this move by the Sheriff’s office violated the First Amendment, writing, “discriminatory governmental action aimed at the communicative impact of expression is presumptively at odds with the First Amendment.”  The court continued, “Above all else, the First Amendment means that the government cannot restrict freedom of expression on the basis of its ideas, message or content.” So that seems pretty clearly applicable to Trump’s treatment of Acosta, especially in light of Trump’s near-constant berating of CNN.

Courts, of course, do not always side with the media.  Courts have ruled that it is permissible for government officials to restrict journalists’ access in some circumstances. For example, Trump could choose to give Fox News plenty of exclusive interviews, while totally restricting ABC from similar access.  However, press conferences and press briefings have generally been held to be open to the media.

While we’ll have to wait to see the extent of Trump’s CNN-exclusion to assess legal consequences, Twitter seems to have spoken about what the “right” thing to do would have been. Looking at you, John Roberts.

John Roberts from FOX News has zero backbone – he should have given the mike to Jim Acosta from CNN after Trump once again insulted CNN.

How much longer before Trump refuses to take questions from anybody but Fox reporters? Why couldn’t John Roberts have shown some solidarity and handed Jim Acosta the mike?

How much longer before Trump refuses to take questions from anybody but Fox reporters? Why couldn’t John Roberts have shown some solidarity and handed Jim Acosta the mike?