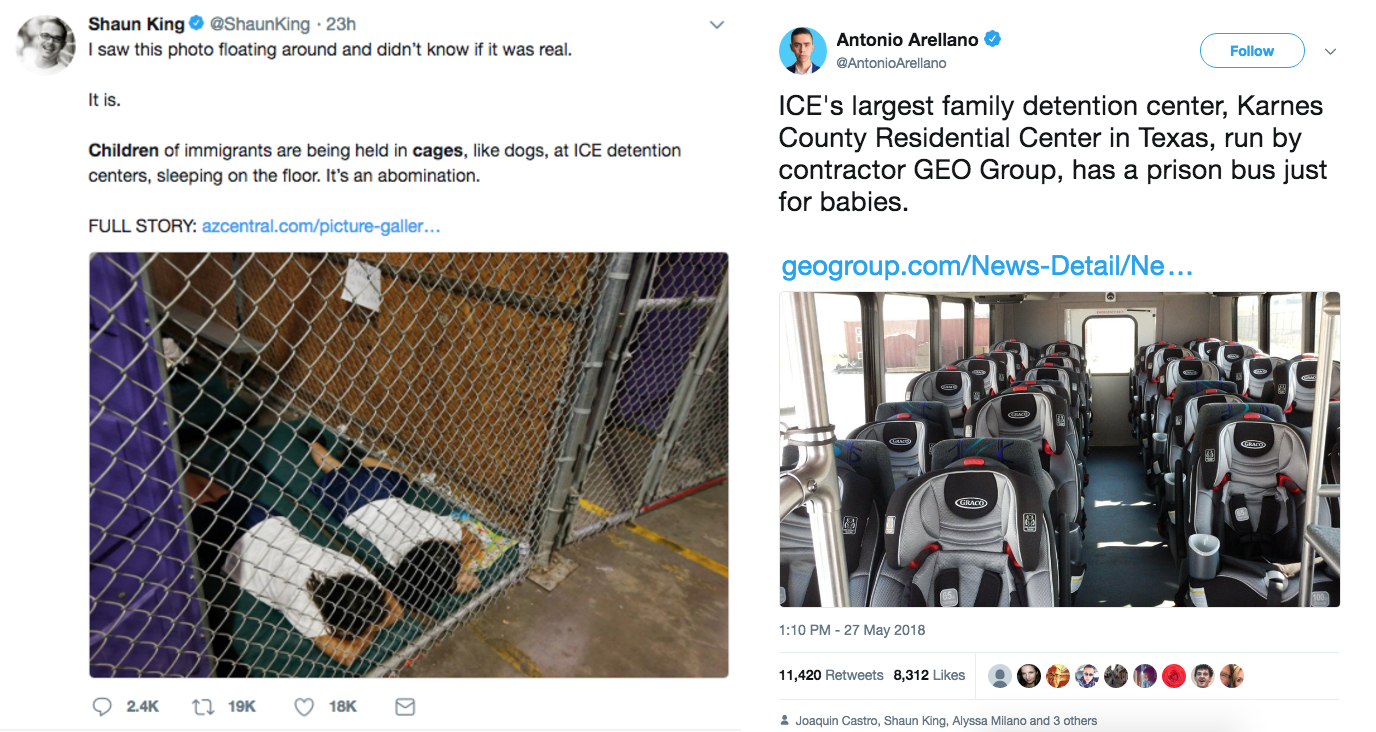 Two images that have been highlighted and repeatedly shared by opponents of President Donald Trump‘s immigration agenda don’t have nearly as much to do with his administration as the Hashtag Resistance might seem to think. Both images concern migrant Latinx children.

The first image, courtesy of AZCentral.com, which is part of the USA Today network of newspapers and media outlets, shows two children face-down in what looks like a large dog kennel or cage. This image shows just one aspect of U.S. Customs and Border Protection’s Nogales Placement Center located in Nogales, Arizona.

The two children, both girls, are being detained by CBP after they were separated from others by immigration officials. Housed in a concrete-floored warehouse like commodities or contraband, the shocking image has prompted allusions–and outright comparisons–to German and American concentration camps in use by both countries during the 1940s.

Other images from the same photo set show children using aluminum foil instead of blankets, picking clothing out of boxes, making phone calls, being marched into their quarters by uniformed federal agents and watching the World Cup through multiple fences. Over the weekend, the first image in the series began to spread like a digital form of bubonic plague upon the Trump White House.

The only problem? The image is from 2014–the direct result of former president Barack Obama‘s immigration policies. But the image is being shared now by Trump’s critics–and AZCentral–apparently in order to focus outrage against the Trump administration’s intentional and explicitly brutal policies of child-separation recently announced by Attorney General Jeff Sessions. Or is it?

More likely is that the image is being shared by liberals now because they simply cannot countenance the fact that such results were the product of their own silence during the Obama administration. As various critics have noted on numerous occasions, left-wing media and immigrants’ rights activists were all over this when Obama was actually in office.

Literally dozens of stories about Nogales in particular were written by journalists at Shadowproof, a reader-supported media outlet, alone. Other left-of-center outlets also covered Obama’s less-than-humane immigration outcomes and policies. Such stories ran when the photographed horrors were actually occurring–not four years later.

But liberals wouldn’t listen back then. They’re, curiously, only listening now.

Context matters. But when pressed on these inaccuracies, some high-profile liberal thought leaders have pushed back. Instead of seeing such accurate reporting as an indictment of America’s immigration and value system in general–that is, regardless of presidential administration–liberals are instead alleging that accurate critics of Obama’s record are simply “normalizing Trump.”

The second image has a slightly more nuanced pedigree. In plain language, it’s a bus full of car seats for imprisoned children used by the Karnes County Residential Center in Karnes County, Texas. This disturbing image has prompted Trump’s–and ICE’s–critics to refer to the vehicle as a “baby deportation” or “baby prison” bus The image comes courtesy of the PR team from GEO Group, Inc.

Geo Group is one of ICE’s largest independent contractors. The logic and statutory carve-outs of America’s neoliberal regime mandate that this country’s long-standing bi-partisan commitment to detaining migrant children (after separating them from their families) be largely undertaken by private third-parties. Such contractors, and their allies in government and media, sing a version of the national anthem which goes something to this effect, “Publicly subsidized. Privately profitable. Even when it comes to human child storage.”

But again, let’s note the date. The story accompanying the image is from April 29, 2016. That’s roughly six months before Hillary Clinton lost a lay-up election to Trump who previously hosted a game show on NBC. The story itself notes changes at Karnes that took effect in December 2015. Once again: this image shows the direct result of policies enacted and carried out during the administration of Barack Obama–not Donald Trump.

And, yes, stories about Karnes are extant from the time period when the largest number of children were being held and processed there. Again, such stories almost singularly appeared in the left-wing press. Again, Shadowproof leads the pack. But again, the “baby deportation bus” image is only now being shared to tar-and-feather Trump and his immigration agencies.

Maybe the problem liberal critics have with Trump being “normalized” is that Trump is actually pretty normal. At least when it comes to immigration. And certainly viewed in the relevant context of his immediate predecessor, Barack Obama, whose Scandal Free Presidency™ earned the 44th president the accurate moniker of Deporter-in-Chief.

In other words, Donald Trump’s record on immigration is one of Barack Obama’s few lasting legacies.

As for the basic claim of the children’s bus being deportation-focused? That also appears to be untrue. Geo Group’s own press release claims the bus is used for “offsite field trips…” That release notes:

These field trips are part of the contract with the U.S. Immigration and Customs Enforcement (ICE). Field trips are provided to all children, ages four through seventeen enrolled in educational programs provided by the John H. Wood Charter School, located at KCRC. Field trips consist of going to a variety of places, such as the San Antonio Zoo, seeing a movie at the local theater, going to the park, etc.

Not content to rely upon the word of the press team for a company that butters its bread on child storage, Law&Crime reached out to Geo Group for comment and clarification about the alleged “baby deportation bus.” In a statement received after this article was originally published, Geo Group’s spokesperson, Pablo E. Paez noted:

Accusations claiming that a bus used for field trips at the GEO-operated Karnes County Residential Center serves any other purpose are unequivocally false. This program was developed and began under the Obama Administration to provide children assigned to our care with the opportunity to visit a range of off-site locations from the San Antonio Zoo to local movie theaters in partnership with a local independent charter school.

Editor’s note: this article has been edited to include a statement from Geo Group and for accuracy.