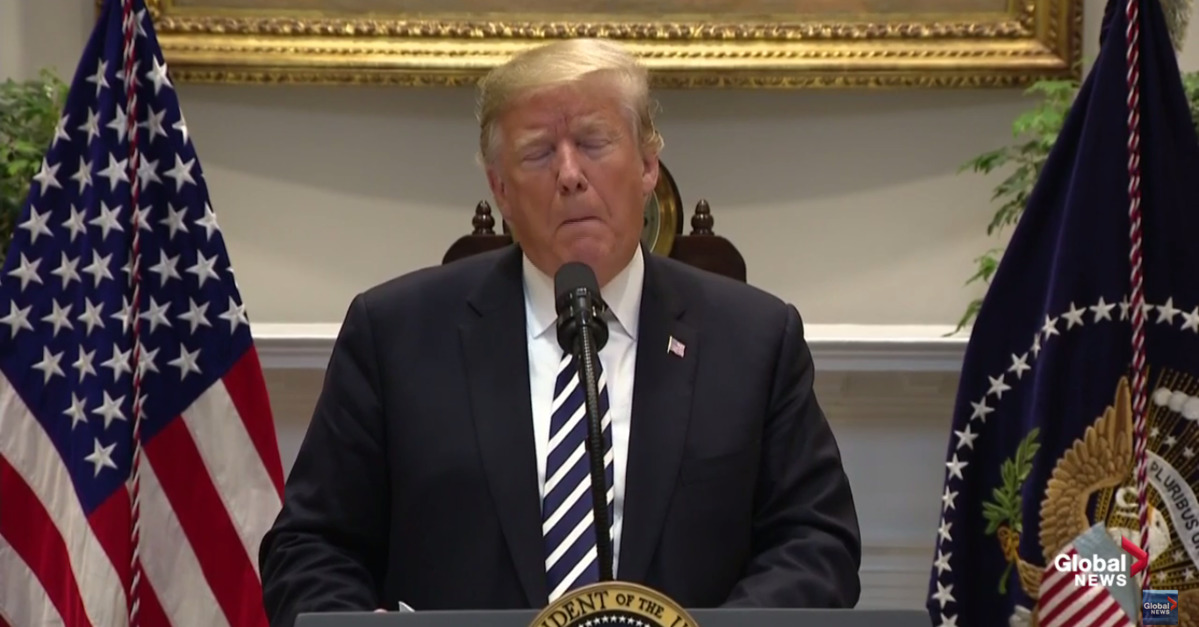 President Donald Trump promised a major announcement regarding the U.S. asylum process on Thursday. While there was no major development, CNN and other media outlets ended up showing most of Trump’s speech without interruption. The Toronto Star‘s Washington correspondent Daniel Dale summed up the contents this way:

Trump has concluded the speech. There was like one sentence of this “policy announcement” on asylum seekers and ports of entry. Otherwise, he just said all the things he says.

Speaking of “all the things he says,” these were the seven biggest falsehoods and distortions uttered during Trump’s speech.

Fact: There is no crisis on the U.S.-Mexico border.

Ask the people in Texas who actually live and work along most of that border. Texas ranchers have dismissed the Republican Party’s “border crisis” rhetoric.  The mayor of Brownsville recently noted:

There is not a crisis in the city of Brownsville with regards to safety and security. There’s no gunfire. Most of the people that are migrating are from Central America. It’s not like they’re coming over here to try to take anybody’s job. They’re trying to just save their own lives. We’re doing fine, quite frankly.

2. Trump claim: The migrants in the caravan are not “legitimate asylum seekers,” and “almost everybody, everybody is abusing it.”

Fact: Most asylum-seekers from central America are fleeing their countries because the United States has armed, funded and otherwise-supported right-wing paramilitaries and death squads in places like El Salvador, Guatemala and Nicaragua for decades–particularly during the Carter and Reagan presidencies. More recently, in 2009, the U.S. supported a right-wing coup d’etat in Honduras. This latest disregard for international norms, international law and regional stability led to a fresh spate of violence in the region and exacerbated preexisting social fragility and directly influences the current spate of asylum-seekers.

The people currently making their way to the United States are in the Department of Justice’s own estimation, facing “a well-founded fear of persecution.” As the research and advocacy agency, the Washington Office on Latin America notes:

Central Americans who cite fear of generalized violence in their asylum applications are not making a baseless claim—courts have found that, under the very terms of U.S. asylum law, applicants fleeing gang violence and other threats qualify for protection.

3. Trump claim: Only “a level of three percent” of asylum seekers return for their trials after making an asylum claim. They “never show up for their trials…they never come back [and] they are never seen again.”

Fact: Even the most conservative estimates note that nearly two-thirds of asylum applicants return for their originally-scheduled trials. The anti-immigration Center for Immigration Studies notes that at least 63 percent of all foreign nationals register court appearances. The Trump administration’s own Department of Justice pegs that number even higher—noting that up to 75 percent of asylum seekers make their court dates.

4. Trump claim: His administration is already building the Wall and is about to receive additional funds to the tune of $1.6 billion to further construct the wall.

Fact: No part the wall has been built. A 2018 omnibus bill contained $1.6 billion in order to maintain current border security operations—not one cent of that funding was allocated to build Trump’s proposed wall.

The Obama administration’s [policies were] not intended to break-up families–that was an occasionally expected side effect–while Trump’s recently-confirmed policy is expressly directed toward that end in the name of “deterrence.”

6. Trump claim: No one pointed out or complained about Obama’s immigration policies.

Fact: Immigrant’s rights advocates frequently protested the Obama administration’s record-breaking deportation numbers and other policies that resulted in families being separated. Most Democratic Party figures and partisans ignored these policies or made excuses for them, but it’s simply not true that Obama’s policies went unnoticed. Additionally, Many media outlets covered the Obama administration’s alleged immigration abuses, too–though much of the attention being paid to those policies came from reader-supported and left-of-center publications.

7. Trump claim: The asylum seekers are part of “an illegal caravan.”

Fact: There’s nothing illegal about groups of people who are, effectively, political refugees making asylum claims. In fact, it’s not only legal–it’s a protected right to apply for asylum.