If SCOTUS Doesn’t Get Involved in Pending Case, Veterans Could Potentially Be Court-Martialed For Speaking Against Trump 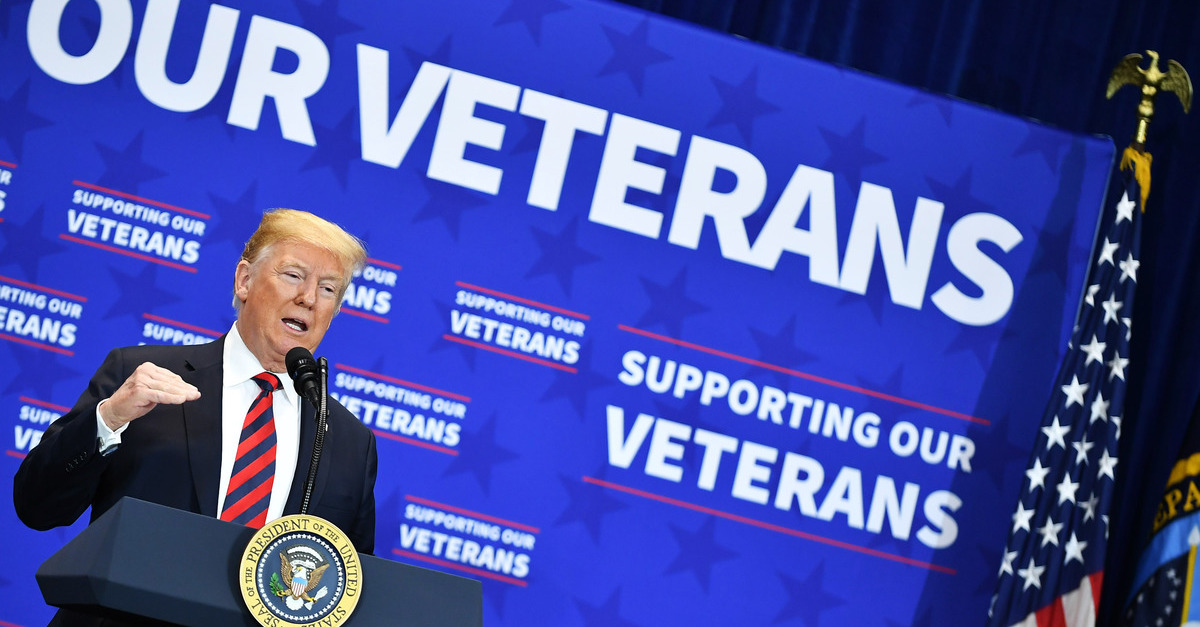 On Friday, the Supreme Court will consider whether it should take up a case that not only questions what it means to be a service member, but also could have ripple effects extending as far as which Americans could be court-martialed for speaking out against the president.

The case is Larrabee v. United States, and the immediate issue is whether it was appropriate for Steven Larrabee’s rape prosecution to have been presided over by a military court as opposed to a civilian one.

Larrabee served twenty years in the Marine Corps, retired as a Staff Sergeant, and transferred to the Fleet Marine Corps Reserve. After retiring, he continued to live in Iwakuni, Japan, and worked managing two bars. Three months after Larrabee retired, he raped one of his bartenders (the wife of an active-duty Marine sergeant) while she was unconscious and slumped over a bar stool, and recorded both the assault and his subsequent laughter and jeering comments on his cell phone.

Larrabee pleaded guilty before a court-martial and was sentenced to eight years’ confinement, a reprimand, and a dishonorable discharge. As part of the plea agreement, though, he would only serve ten months, and the reprimand was lifted. He did, however, remain dishonorably discharged. Now, he’s appealing his conviction on the grounds that as a retiree, the court-martial shouldn’t have had jurisdiction over the case at all.

While few people would relish the thought of overturning the conviction of a blatant sex criminal, Larrabee brings up legal issues with potential to affect thousands of Americans in a rather important way. Under current practices, service members who are part of “land and naval forces” are subject to prosecution by courts-martial. But Larrabee’s lawyer argues that retired service members are no longer part of those “land and naval forces” for prosecution purposes, and should be tried only by civilian courts.

The question of who counts as “land and naval forces” hasn’t, of yet, had a particularly clear answer. Historically, retired service members have been subject to the power of courts-martial based on the logic that because they’re still on Uncle Sam’s payroll, they’re still part of the military and thus, subject to military jurisdiction.

That logic makes some sense, but is problematic on two fronts. First, it fails to square with recent legal precedent finding that military pensions amount to deferred compensation for past employment, rather than reduced salary for continued employment. Second, it creates the practical (and perhaps unintended effect) of subjecting thousands of people with no current military involvement to ongoing military jurisdiction for offenses wholly unrelated to military service. Larrabee’s counsel raises an eyebrow-raising example:

On that theory, not only would it be constitutional for the military to court-martial octogenarian Vietnam veterans who commit Medicare fraud…

More troubling still is the possibility that the power of courts-martial could extend beyond former service members, and all the way to the 17 million men registered for the Selective Service– for any offense. Definitely a reality that falls far outside what the average American would equate with “due process.” Supporting our troops aside, there aren’t many people who’d be cool with seeing an eighteen year-old be court-martialed for possession of marijuana.

Perhaps the most compelling effect of this military-or-civilian tousle, however, isn’t its application to cases mirroring Steven Larrabee’s: it is a possible secondary consequence of declaring a person a member of “land and naval forces.” Under 10 U.S.C. § 888, a service member who speaks out against the government can be court-martialed:

Although the Larrabee case doesn’t itself involve the prosecution of a service member for bad-mouthing the Trump administration, it’s not a long walk from “let’s court-martial retired vets for civilian crimes” to “let’s court-martial those same vets for this one crime.” After all, both the statute and the tribunal are already in place, and the Trump administration isn’t exactly famous for encouraging constructive criticism.

The Trump administration opposes Supreme Court involvement on the Larrabee case, arguing that it makes good sense for retired service members to answer to courts-martial, because those folks could be called into active duty at any time; conspicuously absent in the government’s brief is any position taken on the hypothetical case of a veteran decades-removed from military service prosecuted for a civilian crime unrelated to military service.

Further, the government disputes that its broad policy for defining “naval and land forces” could affect 18-year-olds registered for the Selective Service System. Those people, the government contends, are not yet members of the Armed Forces, and accordingly, courts-martial wouldn’t be tempted to assert prosecutorial authority. While the government may well be correct on that point, its diametric opposition to Larrabee’s contention exemplifies just the reason why it might be a good idea for SCOTUS to clarify things.

Larrabee’s counsel argues that SCOTUS’ involvement is critical to cauterize what could become a “staggering expansion of military jurisdiction” – a characterization disputed by the Solicitor General, but not altogether outside the realm of reason. The Supreme Court has scheduled the case for its February 15 conference, and we at Law&Crime will stay on it and keep you posted.