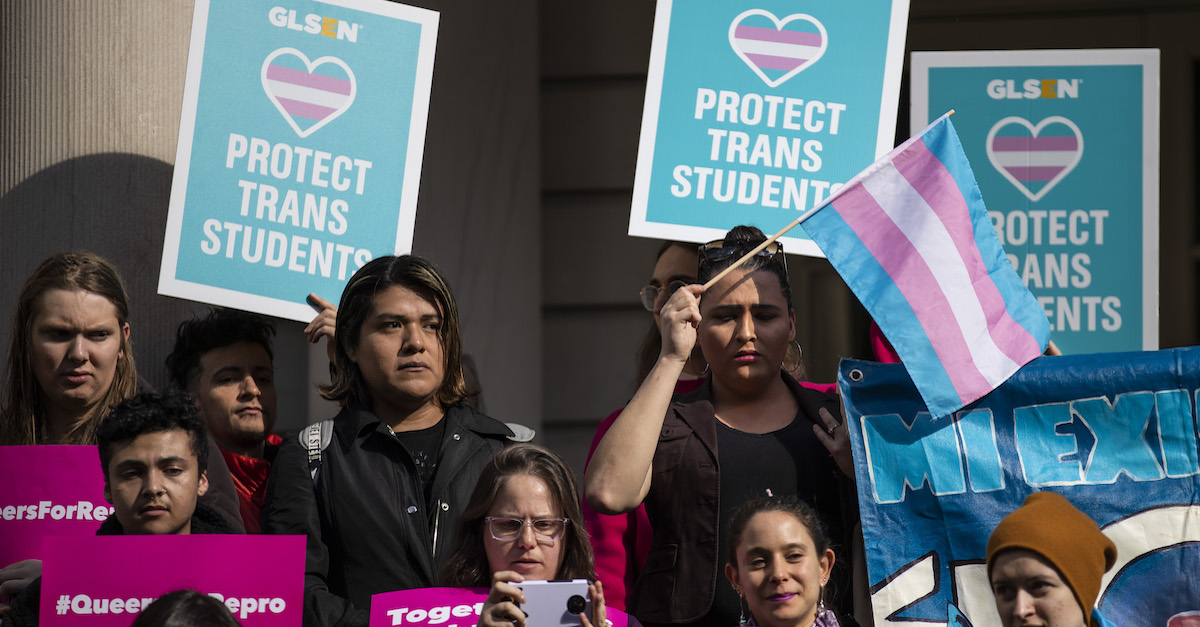 The families of three transgender teens just suffered a tough loss at the hands of William Odis Bertelsman. They’d banded together to sue Ohio Probate Judge Joseph W. Kirby after he denied their children’s requests for name changes. Despite Judge Kirby’s remarkably insensitive handling of their cases, the federal court declined to get involved, on the grounds that Kirby is entitled to judicial immunity.

As Law&Crime reported previously, Elliott John Whitaker, (born Heidi Claire Whitaker), is a 15-year-old transgender boy who, with support of his parents, requested an official name change. Judge Kirby seized the opportunity to make his stance on transgenderism quite clear: it could be “confusion” or “peer pressure,” and it’s not nearly important enough to justify a name change. Judge Whitaker wasn’t persuaded by Elliott’s medical diagnosis of gender dysphoria, his parents’ support for the name change, or even his impending medical treatment. Rather, the judge made a statement from the bench that could only be interpreted as a spit in the face of the transgender community.

In a spectacular feat of mansplaining, Judge Whitaker continually referred to Elliott as a girl, all while justifying his rationale for subverting parents’ own judgment about what’s best for their child:

Whether Heidi is experiencing Gender Dysphoria or is just not comfortable with her body is something that only time will reveal. Is Heidi’s distress brought about by confusion, peer pressure, or other non-transgender issues — or is it truly a mismatch between her gender identity and her body? …The Court recognizes the reality that Heidi’s brain is still growing and changing, and is simply not ready to make this life-altering decision.

The whole his/her thing, by the way, isn’t just the PC-police getting unnecessarily offended.  The appropriate way for a court to refer to a transgender person is by using that person’s asserted gender identity. Don’t take my word for it – check out what the Supreme Court did that time when conservative groups tried to get cute by referring to Gavin Grimm as a girl.

The Whitaker family (together with two other similarly-treated families) appealed the name-change denial, but also filed a separate lawsuit calling out the judge for his unfair treatment of their children. The lawsuit challenged not the judge’s decision, but rather, his process. During their children’s cases, Judge Whitaker asked multiple embarrassing medical questions, afforded no deference to parental wishes, and implied that transgenderism was nothing more than a fad influenced by Caitlyn Jenner. This process, which varied wildly from what would’ve been done in a name change case that didn’t involve a transgender subject, was discriminatory. The families weren’t looking for money damages. In fact, they knew that federal law would likely render the judge immune from such a claim. They did, however, ask for a declaratory judgment – a ruling that the judge had done them wrong.

Let’s be honest. If any judge used a unique set of procedures for black litigants, or for women, or for Jewish people – we’d all agree that we have a big problem. It’s exactly that kind of unequal treatment under the law the Fourteenth Amendment sought to remedy. But it seems that the Eastern District of Kentucky just isn’t ready to get on board with championing the rights of transgender teens.

District Judge William O. Bertelsman, a Carter-appointee who’s been on the federal bench since 1979, ruled that Judge Kirby is immune from such a lawsuit. Those seeking name-changes have the right to appeal, but their recourse ends there. As if to underscore just how much the federal court is looking to avoid weighing in on the matter, it explained that even if the judge hadn’t been immune, the court should still abstain from second-guessing his decision outside the standard appellate process.

As frustrating as it is to watch the federal court skip out on the chance to call out discrimination, it’s even worse to see it turn a blind eye to the significance of Judge Kirby’s taking a stance against the transgender community. In his order, Judge Bertelsman declared, “Judge Kirby had no personal stake in the grant or denial of the name change, but rather he was performing his judicial duty to decide whether the name change was in the best interest of the child.”

Let’s be serious. There’s a huge personal stake for any judge presiding over a case involving the rights of transgender people. Judge Kirby was appointed Judge of Warren County Probate/Juvenile Court in 2013 by Governor John Kasich. While he would’ve gained little more than the thanks of a few families by granting Elliott Whitaker’s request, he has now shown himself to fall directly in line with those for whom transphobia is a powerful political vehicle.