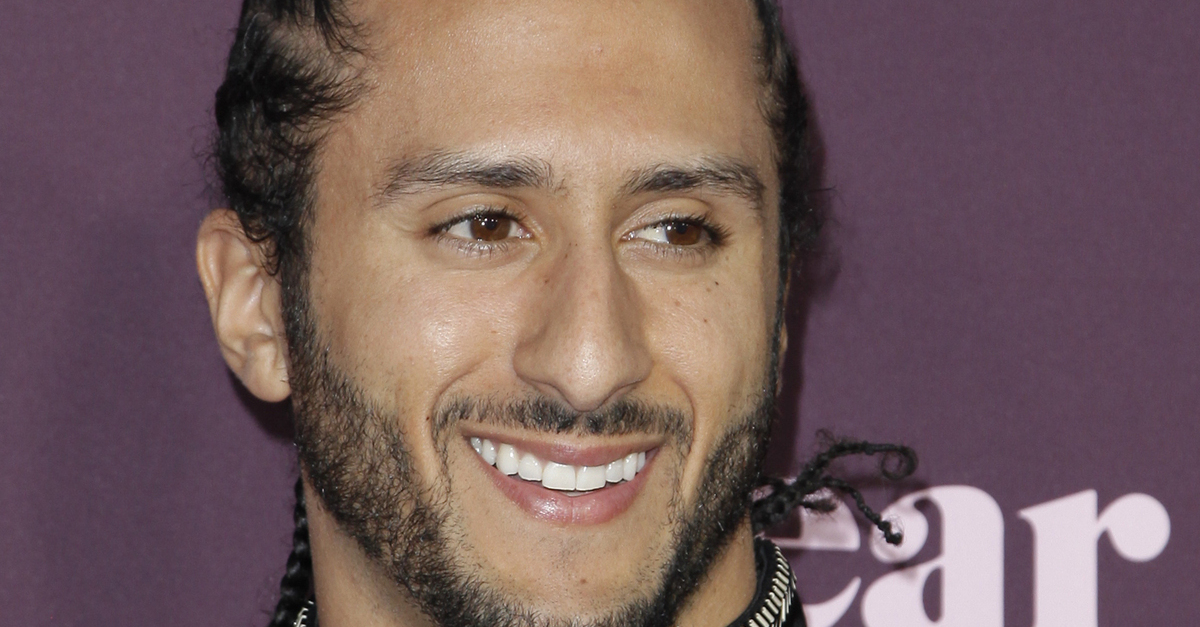 Well, we haven’t heard from Colin Kaepernick lately, so it was time. He’s at it again, this time, complaining to Nike that it shouldn’t be releasing its “Betsy Ross Flag” sneaker this Independence Day.

Before I go on, let’s get something straight: I was at least a lukewarm supporter of Kaepernick’s kneeling-during-the-national-anthem protests. His message was a good one—that black Americans should be treated with respect by their government. His execution was less good. Unlike something precisely targeted, like a boycott or protest of a specific action, Kaepernick’s ask was too vague to be measured even in earnest success. But because those protests drew so much public awareness, both to their underlying message and to the value of peaceful protest as a tool for social change, I was on board.

When Nike released that controversial ad featuring Kaepernick, I was similarly supportive. “Stand for something” is a message everyone should be able to get behind, no matter the context.

However, this nonsense with Nike and flags and Betsy Ross is just ridiculous. For starters, exactly zero about the colonial flag specifically indicates slavery. Of course, slavery existed in the American colonies during the 18thcentury, and of course, slave labor assisted those colonies in winning the American revolution. Slavery is a sad and shameful part of our history. It is connected to everything that happened in America for hundreds of years. That connection is something we must face, not something to erase. It is incumbent on 2019 Americans to recognize that African people–taken against their will and held captive for generations–built this country. They are inseparable from it, as they are from any part of our American history.

Still, the realities of slavery do not make the American revolution, American history, or our flag any less worthy of celebration. And they certainly do not make the colonial flag a symbol of slavery. Slavery and the American Revolution happened at the same time; that coincidence does not mean that revolutionary symbols celebrate slavery any more our current flag celebrates holding children in detention centers.

To be fair, Kaepernick’s take on the colonial flag stems from the fact that white supremacist groups have, indeed, attempted to co-opt that symbol for their own purposes.

The Betsy Ross flag has been turned into a symbol of white nationalism and domestic extremism. Conservatives will whine, but Colin Kaepernick was right to speak out and Nike was right to pull the products. https://t.co/rq8HWeaqh6

It seems to me, though, that the answer isn’t to throw out the flag when it’s being invoked appropriately, but rather to denounce those who would take a revered American symbol and transform it into one of hatred and exclusion. Side-by-side this issue with that of a Confederate flag or Nazi swastika. Those symbols are about oppression. Their history is the history of inhumanity. They have not been misused by a relatively small sector of society, and their meaning has not been transformed. When the meaning behind the colonial American flag becomes so transformed as to primarily connote slavery, I’ll be with Colin. For now, though, it’s about America’s birth and everyone needs to stop complaining.

As a secondary issue, Nike’s willingness to blindly go in whatever direction Colin Kaepernick points is stupid. Nike should be able to decide for itself whether its products offend consumers without Kaepernick serving as its Chief Morality Cop.

Nike has made its decision, and now we’re making ours. I’ve ordered the Arizona Commerce Authority to withdraw all financial incentive dollars under their discretion that the State was providing for the company to locate here. 7/

Agreeing with Ducey isn’t a feeling I enjoy; here, though, he’s somewhat right. Nike’s decision to blindly defer to Kaepernick’s outrage is a bit much. Ducey’s correctness couldn’t even last to the end of his Twitter thread though. He couldn’t resist the temptation to bypass, “the colonial flag isn’t offensive,” and go straight to “Betsy Ross founded our country.”

And finally, it shouldn’t take a controversy over a shoe for our kids to know who Betsy Ross is. A founding mother. Her story should be taught in all American schools. In the meantime, it’s worth googling her. 9/9

Give me a break. If Ducey had studied his history at all, he’d know that many credit Betsy Ross for being the original “fake news,” equating the tale of her sewing the first flag with George Washington and the famed cherry tree. In fact, the story of Ross’s involvement with the colonial flag didn’t emerge until after her lifetime – possibly a truly laudable PR move by the Ross family. And given that Ducey’s state ranks 47th in education, I’d like to cordially invite him to shut up about what he thinks kids should be taught.